26 Stores That Will Be Closed on Thanksgiving Day

Barnes & Noble, Costco, and other retailers are shutting their doors for the holiday — and REI is taking it a step further.
BY:
ELIZABETH HARPER
DealNews Contributing Writer 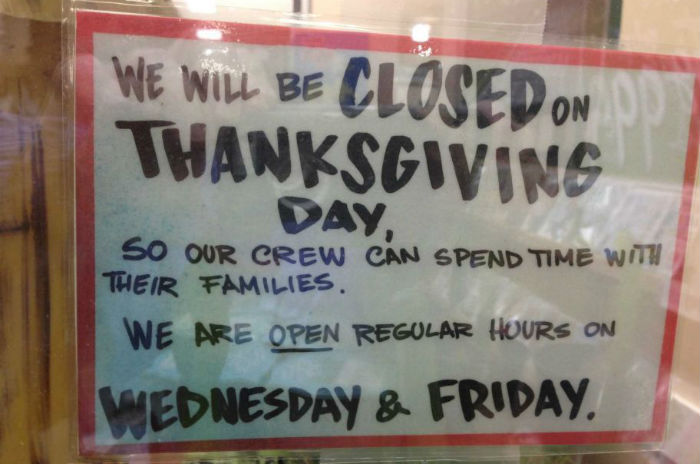 By this Thanksgiving, the holiday shopping season will be well under way, with the year's very best deals expected to happen on Turkey Day itself. Though we think of Black Friday as having the best sales of the holiday season, Thanksgiving Day deals have topped them for the past three years, with 14% more Editors' Choice deals on Thanksgiving than on Black Friday in 2014.

But not all retailers embrace this shopping holiday, choosing instead to close their doors to customers and allow employees to spend the day with their families. So which stores will be closed and which will be open this Thanksgiving? Let's take a look at the retailers who have already announced that Thanksgiving Day won't be the beginning of their holiday shopping season.

More Stores Will Be Closed on Thanksgiving This Year

Though not every store has announced its Thanksgiving weekend sales plan, a number have already said they'll be closed on Thanksgiving Day. This can be a PR boon with consumers who think Thanksgiving Day should be a family holiday; about 60% of Americans dislike the fact that stores keep Thanksgiving opening hours. And you can certainly expect the stores that aren't open on Turkey Day to advertise their family-friendly policies, garnering positive sentiment from shoppers even though they might be delaying the sales season.

This year, GameStop announced its decision to close on Thanksgiving Day in a press release dramatically titled "GameStop Takes a Stand!" The company explained that the decision was part of its "core values of 'Protecting the Family' and doing the right thing to disrupt the emerging trend in the retail industry of taking away holidays from customers and associates." In previous years, we've seen other businesses brag in similar ways about their closed-on-Thanksgiving policy.

Here are the stores that are set to close for this year's Thanksgiving holiday:

Last year, additional stores were closed on Thanksgiving Day, and we may yet see them announce Thanksgiving closures for 2015:

We will update this list through Thanksgiving week itself.

Of the stores that have already announced Thanksgiving closings, REI has gone well beyond the traditional closed-for-the-holiday rhetoric: The store will also be closed on Black Friday, and also says it will still pay its emplyees for the day.

"REI believes that being outside makes our lives better," the retailer said in a statement. "That's why this Black Friday, we're closing all 143 of our stores and paying our employees to head outside." As a retail co-op selling outdoor recreation gear, this makes good sense for the brand — even though it's a new move for the company, which was open for Black Friday in 2014.

REI will not only shut its doors on Thanksgiving; it is also closing its 143 stores on Black Friday as part of its #OptOutside campaign.

The sort of outdoor enthusiast likely to be shopping at REI will no doubt be thrilled to join in the #OptOutside campaign and skip crowded shop aisles. President and CEO Jerry Stritzke explains, "Our co-op has been dedicated to one thing and one thing only: a life outdoors. We believe that being outside makes our lives better. And Black Friday is the perfect time to remind ourselves of this essential truth [...] We're choosing to opt outside, and want you to come with us."

We've yet to see other retailers copy this move, but if it pays off for REI this holiday season, we're likely to see more companies doing the same next year.

Not All Thanksgiving Weekend Shopping Happens in Stores

While you may buy into the myth that shopping on Thanksgiving Day or Thanksgiving weekend means fighting through crowded stores, more holiday shopping than ever is happening online. On Black Friday, 83% of shoppers will be heading to Amazon, as the retailer is likely to aggressively price match its brick-and-mortar competition. And not to be outdone, major retailers like Walmart, Target, and Best Buy will also be offering deals and promotions online.

In the end, even stores that are closed may rack up the sales on Thanksgiving Day as tech-savvy shoppers browse for deals online before or after sitting down for Thanksgiving dinner.

With online shopping continually on the rise, even deal-hunters don't have to choose between finding the best sales and spending time with their families. Thanksgiving Day deals are plentiful, and they're also plentiful online with average online discounts of 25.2%. That way you can have your pumpkin pie and eat it, too.

Readers, what do you think about stores announcing their decision to close on Thanksgiving Day — or in REI's case, Black Friday? Will you be shopping on Thanksgiving this year? Let us know your thoughts in the comments below!

Anna52157
I am boycotting any store that opened on Thanksgiving this holiday season. I will only shop at stores that valued their employees more then the almighty dollar.
November 29, 2015

futurestar84
All the shopping starts on Black Friday. Most of the stores were always close on Thanksgiving. Black Friday is the day they make money. No one come on Thanks giving as they are busy spending time with their families. Also they want to save money on labor too as they have to pay a lot of over time and time in a half to their employees. So they calculate the sales vs employees salary. Result they were loosing money or may not making much. Good side, Employees get to spend time with their families.
November 4, 2015