Ready to buy one... and get what you paid for? Jos. A. Bank's CEO says its infamous BOGO sales are "unsustainable" and hurt the brand's attempts to attract fashion-forward clients.
BY:
ERIN CODUTI
DealNews Contributing Writer 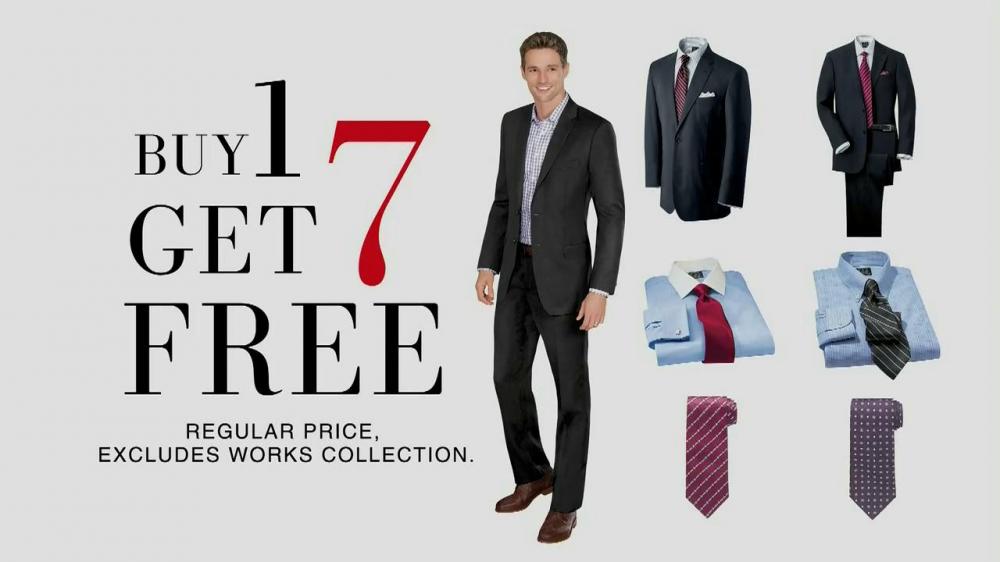 Jos. A. Bank has been known for insane sales, but the days of "buy one suit, get seven" may be over.

The company is changing its sales strategy to try to move away from the discount image and appeal to a broader variety of customers. We look at what this may mean for the future of the store, and for your ability to get great deals on menswear.

The store's reputation for heavy discounting has clearly been honestly earned, but even two years ago we were seeing signs that it was no longer working well. With frequent steep sales in excess of 66% off, the store's supposed "regular" prices had begun to seem irrelevant — even deceptive, as some alleged. DealNews saw 26 "buy one, get more" sales from Jos. A. Bank during 2014. (That's over two every single!) We also saw steep discounts, with individual items dropping as low as 90% off (with free shipping to boot).

Although the brand was acquired by Men's Wearhouse a year ago, it hasn't seen strong sales figures. CEO Doug Ewert has called the current discount strategy "unsustainable" and said that it damages the value of the Jos. A. Bank brand. With Saturday Night Live skits suggesting Jos. A. Bank's buy-one-get-more suits as a cheap alternative to paper towels, it's not hard to see where Ewert is coming from.

Moving Away From Discounts Can Be Risky

Phasing out discounts that have come to be expected can be tricky, as JCPenney CEO Ron Johnson's disastrous experiment with eliminating coupons showed. While JCPenney's move was intended to provide shoppers with better everyday value, eliminating the coupons seemed to eliminate a lot of customer excitement, reducing total sales by over 20%. Even the eventual decision to bring back the coupons didn't bring back all the customers who'd left.

Ewert seems to be planning a less extreme approach. Rather than eliminating sales entirely, he said he will begin by stabilizing prices and keeping discounts where they were a year ago rather than attempting to beat the store's past lows. Customers can expect more single-item sales, rather than bulk deals.

The Men's Wearhouse leadership is also looking to diversify what Jos. A. Bank offers to attempt to appeal to a broader range of customers (including younger ones), rather than just the discount crowd. The store will begin carrying high-end Joseph Abboud suits. In addition, they plan to increase their focus on tuxedo rentals, slim-fit suits, and big-and-tall suits.

The plan is to try to broaden the brand's appeal without alienating current loyal customers — a tall order. The majority of the store's current customers have been drawn in by the store's long history of extreme discounts. At the same time, the "discount brand" image could make it more difficult to attract customers who place value on more than simply price. In a sense, that image is both what the store relies on and what it needs to escape from.

Do you shop at Jos. A. Bank? How do you feel about the store's decision to back off on discounting? Let us know in the comments below. And to see all the latest menswear deals anytime, be sure to check out out men's clothing deals, and sign up for our men's clothing newsletter.

HandicappedFatty
This is a wonderful idea, as when I was mobile I would do some shopping for my husband on my cart (they need more handicapped ramps!!!) but my husband always thought the suits looked too dated, and wide, even though the colors were nice...
April 24, 2015

nimer
Thanks @XISMZERO. Thanks to Dealnews I always look at the bottomline, and like you confirmed year round you are really looking at $100 to $200 (maybe $300) per suit. You and I have similar stats and that's why I never really bought anything for myself; tried to buy a suit a couple of times for my dad but never really liked the quality. Ended up finding much better, straightforward pricing suit at Macys.
April 23, 2015

XISMZERO
I worked as a sales associate at Jos A. Bank for 2 years and I can tell you not only I but all of my former associates have been saying this kind of sales practice has been damaging to the business for years. Still, people do buy into it rather easily. As a disclaimer, I never wore any of their suits but that's not because they were all bad (the Executive line were visibly and suitably absolute garbage -- like if Walmart had a suit line). The fits never looked right on me (5' 8", 160lbs), even slim, looked boxy and poorly constructed.

To be fair, Jos A. Bank never did more than Buy 1 Get 3 (suits)... the get "7" relates to the other merchandise included when you paid $895 for one suit. Still, any idiot can see what they're doing, have been doing for years and how much of a joke the pricing is.

Texasdealhunter
SNL did a hilarious parody commercial of Jos. A. Bank last year.

b1walker
This place has always had the feel of a scam plus the merchandise sucks. To get me to consider coming back they would have to overhaul a lot.
April 22, 2015

dizzacow
Agree with nimer, they price themselves in to a luxery category. I say leave them to the one percenters. ;)
April 22, 2015

nimer
Never liked the brand to begin with (seems a bit dated and 'older'), but I have to say that they overprice their merchandise on purpose to create the illusion of a deal when they do a BOGO deal; you always net something around $100 - $200 per suit. There are other stores that sell cheap suits flat out
April 22, 2015

VIEW ALL
Blog · Buying Guides · 2 hrs ago
7 Ways to Score Amazon Prime Membership Deals
Amazon Prime typically costs $14.99 a month or $139 a year, but you can get the service for less. Our tips for securing an Amazon Prime membership discount have you covered.
Blog · Buying Guides · 10 hrs ago
How to Shop and Save on Kids' Adidas Items
If you're looking for athleticwear, shoes, and casual clothes for your kids during your Back to School shopping, don't forget to check out adidas. Our guide on how to shop and save on kids' adidas items has the info you need.
Blog · Morning Jolt · 15 hrs ago
5 Deals You Need to Know Today: Score an Extra 50% off at J.Crew
J.Crew! Extra 50% off! Go go go! Check out this offer and more in our roundup of the five best deals we found over the last 24 hours.
Blog · Buying Guides · 2 days ago
Prime Day 2022 Deals Preview: See All of Our Predictions!
Amazon Prime Day is set to take place in July again this year, but what will the deals look like? Check out our Prime Day deals preview for our predictions concerning the 2022 discounts.