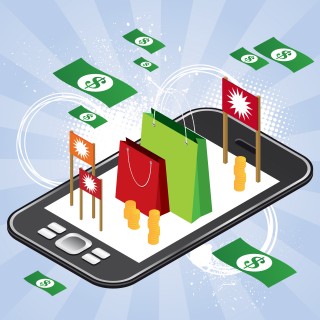 'Tis the season to ... shop on your phone? It's not surprising that the number of dealnews visitors decreases on holidays. After all, people aren't anchored to their computers on a day off.

Kudos to our readers, though, for having mastered the art of mobile deal hunting this season; not only did mobile site traffic increase dramatically on summer holidays, but the number of mobile visits to the site was even greater than those we received on President's Day (a similar 3-day weekend during the winter that would, presumably, encourage more people to stay indoors). What's more, as overall site traffic dips, mobile traffic spikes. This data gives us the impression that our readers are very dedicated deal hunters and take advantage of holiday sales while out soaking up the summer sun.

The number of people accessing dealnews via a mobile device on summer holidays is much higher than average weekdays, too. But just how much of a jump in traffic did we see on the summer holidays of Memorial Day, Independence Day, and Labor Day? Take a look at our mobile traffic infographic below for more insight.

The same kinds of site traffic increase occurred on both Independence Day and Labor Day as well. On July 4th, 2012 we saw 22.48% of traffic come from a mobile device, up from 14.6% last year. In 2011, Labor Day saw a total of 13.93% traffic via mobile devices, and we can only speculate the increase in percentage we'll see this year.

But these numbers aren't strange. They are, in fact, in sync with greater trends on mobile shopping. According to IBM online retail sales from mobile devices have doubled in the last year, increasing from 5.5% in December 2010 to 11% in December 2011. Furthermore, a survey conducted by Nielsen early this year indicated that 79% of smartphone and tablet owners in the United States have used their mobile devices for shopping-related activities — 29% of which were smartphone owners who used their device to actually purchase an item. A general comfort level with mobile shopping seems to be on the rise, and corroborates the spike in mobile traffic we see on dealnews as well.

We also noted that mobile shopping trends vary by device. On our site, iPad, iPhone, and Android traffic all increased on Memorial Day 2012 at a rate of 38%, 15%, and 13%, respectively, compared to the average of the previous three respective weekdays. For iPads, that is a whopping 102% increase over Memorial Day mobile traffic last year. iPhone and Android traffic increases from last year are also substantial at 45% and 68%, respectively.

So, as you too become a pro at navigating critical mobile deal hunting and buying, remember that no time or non-workplace location is an obstacle. In fact, your phone makes any dealnews bargain fair game. We have the mobile traffic to prove it.

Blog · Consumer News · 1 day ago
How to Score This $5 Amazon App Coupon for Free
There are a ton of things you can do with the Amazon app, including redeeming special app-only offers. You can try it out now and get an Amazon app coupon for $5 off your first app purchase.

Blog · Roundups · 1 day ago
How to Find Deals on Apple iPads
iPads come in a range of sizes and with a variety of features, and our experts here at DealNews can help you find deals on iPads that fit your budget. We'll go over the different iPad models and accessories available. Once you know what to look for, check out the iPad deals and iPad sales our experts have found.

Blog · Buying Guides · 1 day ago
How to Find Herman Miller Chairs on Sale
Herman Miller office chairs can be pricey, but you can still score deals on them. Check out our guide to finding Herman Miller chairs on sale to learn more.

Blog · Consumer News · 4 days ago
Consumer Buying Behavior in 2021: How Have Shoppers Changed?
The world drastically changed in 2020, and shoppers are more cautious now. Check out our predictions for consumer buying behavior in 2021.

At Boutique Rugs, use coupon code "DEALNEWS60" to get 60% off a wide selection of machine-washable rugs. Plus, free shipping applies. Shop Now at Boutique Rugs

Use coupon code "affsusgo36offdn" for the best price we could find by $60. Buy Now at Reolink

Add two pairs to cart and apply coupon code "PZY181" to get this deal and save $30. Buy Now at Proozy

Save on dumbbells, stability balls, kettlebells, and more. Shop Now at Target