Want an iPad? Skip the mini and Wait for a Black Friday iPad 2 Deal 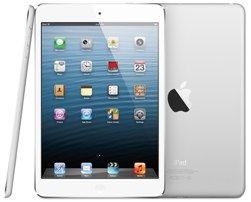 Earlier today, we wondered why anyone would buy the newly revamped iPod touch for $299 when the even newer iPad mini is available for just $30 more. We're now taking that questioning a step further: for consumers who just want a budget-friendly Apple tablet, why buy the iPad mini at all?

Once again, the iPad 2 has made it through another Apple announcement, and the manufacturer will continue to sell the 16GB WiFi model for $399. That's $70 more than the base mini model (also 16GB with WiFi), priced at $329. This difference has prompted sites like Business Insider to declare that the iPad 2 is a pointless purchase. The publication argues that, aside from the size difference, "the iPad mini is the same tablet as the iPad 2, but it costs a lot less. It's going to be tough for people to justify buying an iPad 2 over the iPad mini."

But since Black Friday is now just a month away, we will respectfully disagree with that assessment. The mini of course won't be discounted around Black Friday, unless a lone retailer decides to knock a few dollars off in the name of wild publicity. But promotions for the iPad 2 are a different story, and the now two-generations old tablet will likely return to its lowest price ever.

We've already seen the iPad 2 drop to $299 once this summer, and we're predicting that at least one vendor will do the same around Black Friday. Even if you're skeptical that the iPad 2 will drop to $299, it's very reasonable to at least expect a moderate $50 discount, for a price point of $349. Our reasoning? We've seen 13 deals on new iPad 2 units since March 2012 that cut the tablet to prices between $339 and $369. If our more "extreme" prediction of $299 is correct, then the iPad 2 will cost $30 less than the mini this November; with a more moderate price prediction of $349, the iPad 2 will be within a stone's throw of the mini's cost, at just $20 more.

We understand that many folks will be drawn to the iPad mini purely based on its convenient, mainstream size. But a key selling point for smaller tablets in general has also been the fact that they're more budget-friendly. However, with Black Friday around the corner, and a past-generation, full-sized iPad still in the game, you might end up having to pay a premium for that smaller screen — a somewhat counter-intuitive move within the tablet market. Is it worth it? Readers, will you buy the iPad mini, or wait for a deal on the iPad 2?

dn3949
Why don't you all be honest, Dealnews? You want everyone to skip the iPad mini because Apple isn't paying commissions on them. You guys are sooooo transparent.
October 26, 2012

danman1111
The refurb iPad 2 is often down at $319 - so already cheaper than the iPad mini. The difference is the usability - which will be quite different.
October 26, 2012

Schumi
i followed ponagathos advice and bought a refurbished 3rd generation ipad (wifi,16 GB) for 379 before they run out of them. I have some cables from my old iphone that i can use, also, the 30 pin connector accessories are a bit cheaper than the lightning ones (hdmi adapter, SD card adapter). If the mini was around $250, i would probably buy one, but at 329 it is still expensive and a cheaper full size ipad is a better option for me. also, the screen size of the mini is probably too close to the 4" iphone5 size (4-5 times its area), so depending on your needs, it could feel too small and redundant if you have an iphone 5.
October 25, 2012

ankur1502
I agree with ponagathos. I also feel that iPad 3 seems to be a good choice. I am browsing craigslist for 2-3 months old iPad for about $350. What do you thing are the chances of me finding it? I also look forward to Google announcing Nexus 10 soon. It is rumored to have a display superior that retina display at a shocking base version price of $299. But nothing can be confirmed before Google's "Playground is open" event.
October 25, 2012

ponagathos
Or just pick up a "refurb" 3rd generation Ipad for $379 like I did yesterday after noticing it was no longer offered on Apple's site among the new stuff.  Faster processor(although you could argue it is needed to power the display), much better display, with the other specs matching or beating the Ipad2 and the mini.

So, you pay $120 less than everyone else has over the last six months.  You get to use all the old apple sync and charging cables, docks, etc. you may have(although I do like that new adapter works in any direction).  Hopefully, it will be a little bit before software comes out that you will not be able to run.  I imagine developers will still want their apps to work with the 100 million Ipads already out there, plus the fact the Ipad2 is still being sold further supports its viability.