We pulled our favorite anti-Black Friday quotes from around the web and matched them with some fitting pop culture personalities.
BY:
MICHAEL BONEBRIGHT
Senior Blog Editor

Here in the DealNews ivory tower, it's easy to forget that not everyone loves Black Friday deals the way we do. As we draw closer to shopping's greatest holiday, time and again we find ourselves reading the wise words of Internet commenters that provide us with some much-needed perspective.

Over the course of the last few weeks, we've read so many anti-Black Friday comments that we've been able to discern a pattern; there are at least 11 distinct types of folks who really dislike all that is Black Friday. Below, we've rounded up real quotes from some of the best shopping shade-throwers, and paired each with the pop culture personalities that we feel best represent such archetypes of Black Friday hater. Read on to meet the Anti-Establishment Hater, the Patriotic Hater, and more! 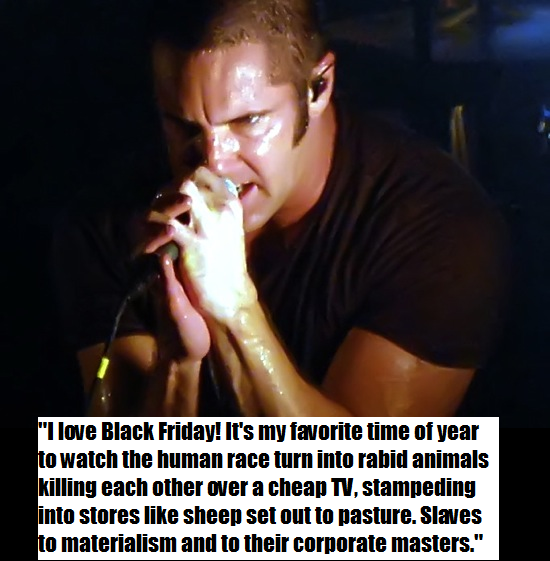 Baa baa black sheep. The Anti-Establishment Haters despise the institution of Black Friday. To these haters, you're not shopping, you're reinforcing the corporate-controlled status quo. We chose Nine Inch Nails frontman Trent Reznor to represent this, the loudest group of Black Friday detesters; they'll probably hate us for it. [Yahoo! Shopping] 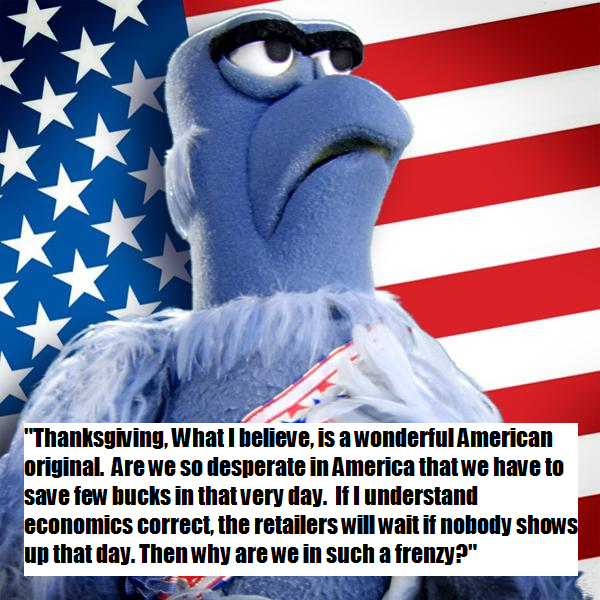 No one loves America more than these Black Friday loathers (with the possible exception of muppet Sam the Eagle). These haters are incensed that Black Friday may be eclipsing the truly American holiday of Thanksgiving. They feel it's their patriotic duty to explain that shopping is just not what the pilgrims and forefathers had in mind. [MSN Money] 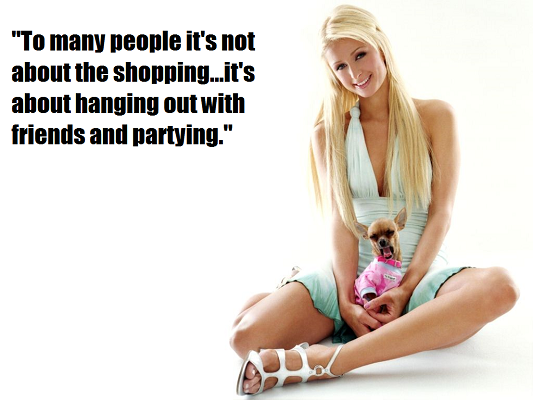 These clueless commenters are pretty sure they've heard about Black Friday. It's a post-Thanksgiving party, right? Or maybe it's some kind of new club? To be fair, they don't really hate Black Friday; they just don't understand it. We chose fun-loving celebutante Paris Hilton to represent these well-meaning Black Friday dissenters — you've got the same chance of seeing her on Black Friday as any one of these haters. [MSN Money] 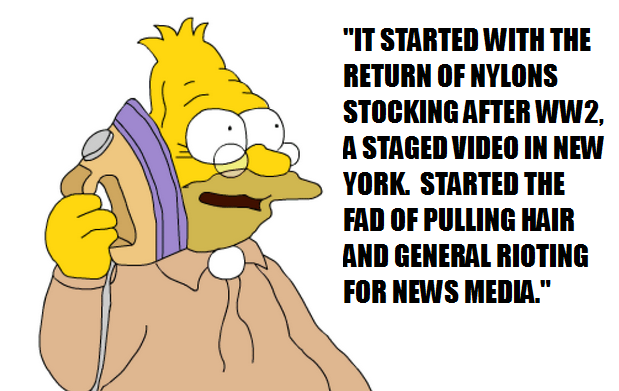 SERIOUSLY GUYS, "BLACK FRIDAY" IS THE CODENAME OF A SECRET RUSSIAN MISSION TO MARS. EVERY DOLLAR YOU SPEND PUTS ANOTHER COMMUNIST IN SPACE. Bless these haters' hearts, their conspiracy theories are nearly as entertaining as they are insane. Like the senility-laden musings of Abe Simpson, the comments left by these Black Friday dissidents are caps-lock-fueled rants that probably won't dissuade you from shopping, but will surely make you giggle. [MSN Money]

The Black Friday Hater Who Sees The Signs

Like Leonardo DiCaprio, these Black Friday haters worry about runaway consumption. Of course, these non-shoppers take things a little further than Leo; they believe that your participation in Black Friday is the first step on a slippery slope that leads to paving over the rain forests. [The Huffington Post] 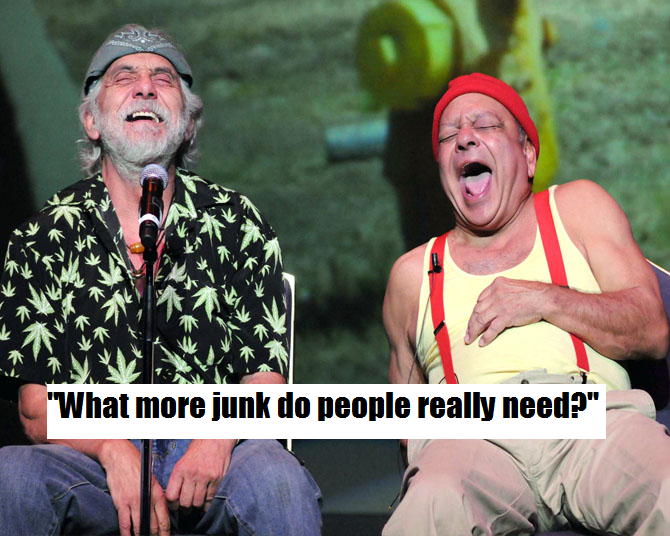 Not to be confused with the Anti-Establishment Hater, these Black Friday non-participants shun shopping because it's just stuff, man. Like their easy-going representatives Cheech and Chong, these haters would rather spend the day after Thanksgiving battling their munchy cravings than other shoppers. [DailyFinance] 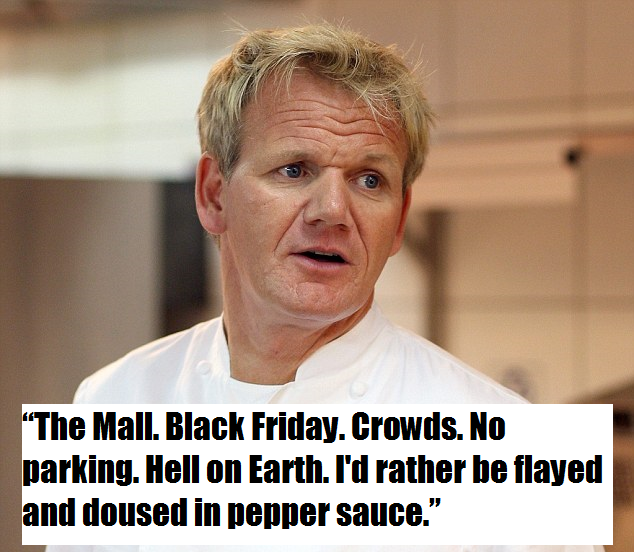 It's not the spending or commercialism that irks these Black Friday haters. It's you. All of you. The thought of spending one second in a crowd of Black Friday shoppers fills these haters with the sort of blind rage that only perpetually angry chef Gordon Ramsey could possibly understand. [DailyFinance] 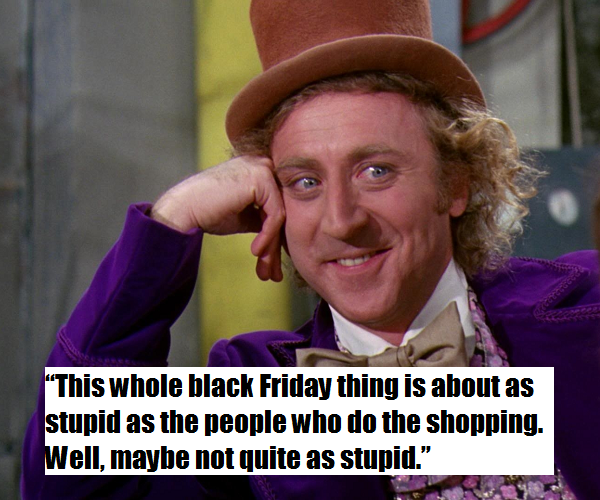 The musings of these Black Friday agitators aren't hard to spot; like so much text that accompanies Willy Wonka's photo on the Internet, their words are often dripping with biting sarcasm. Their caustic attitude makes interpreting and understanding their hatred difficult, though. Ask any of these haters why Black Friday has earned their ire, and they're likely to say it has something to do with your face. [Time] 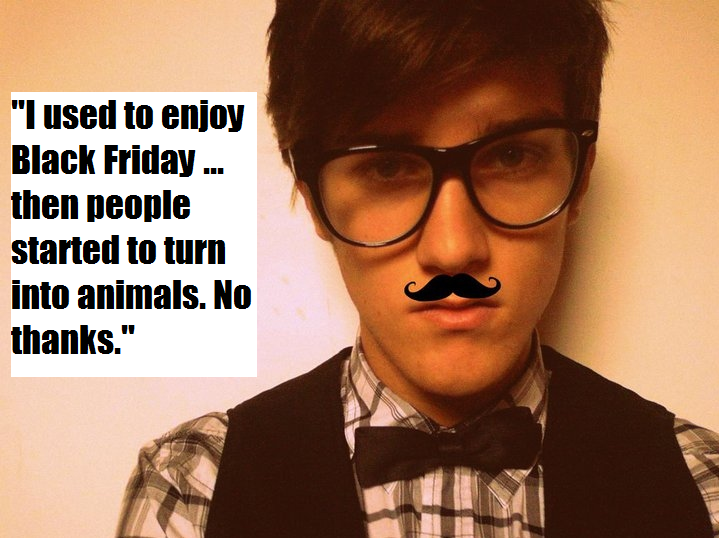 Paradoxically, "I used to love Black Friday" is a popular sentiment among Black Friday haters. These ex-lovers will often say the shopping holiday has changed, recollecting a simpler time when Black Friday wasn't such a big deal. Like the quintessential hipster that represents them, these haters liked the sales before they were cool. [Time] 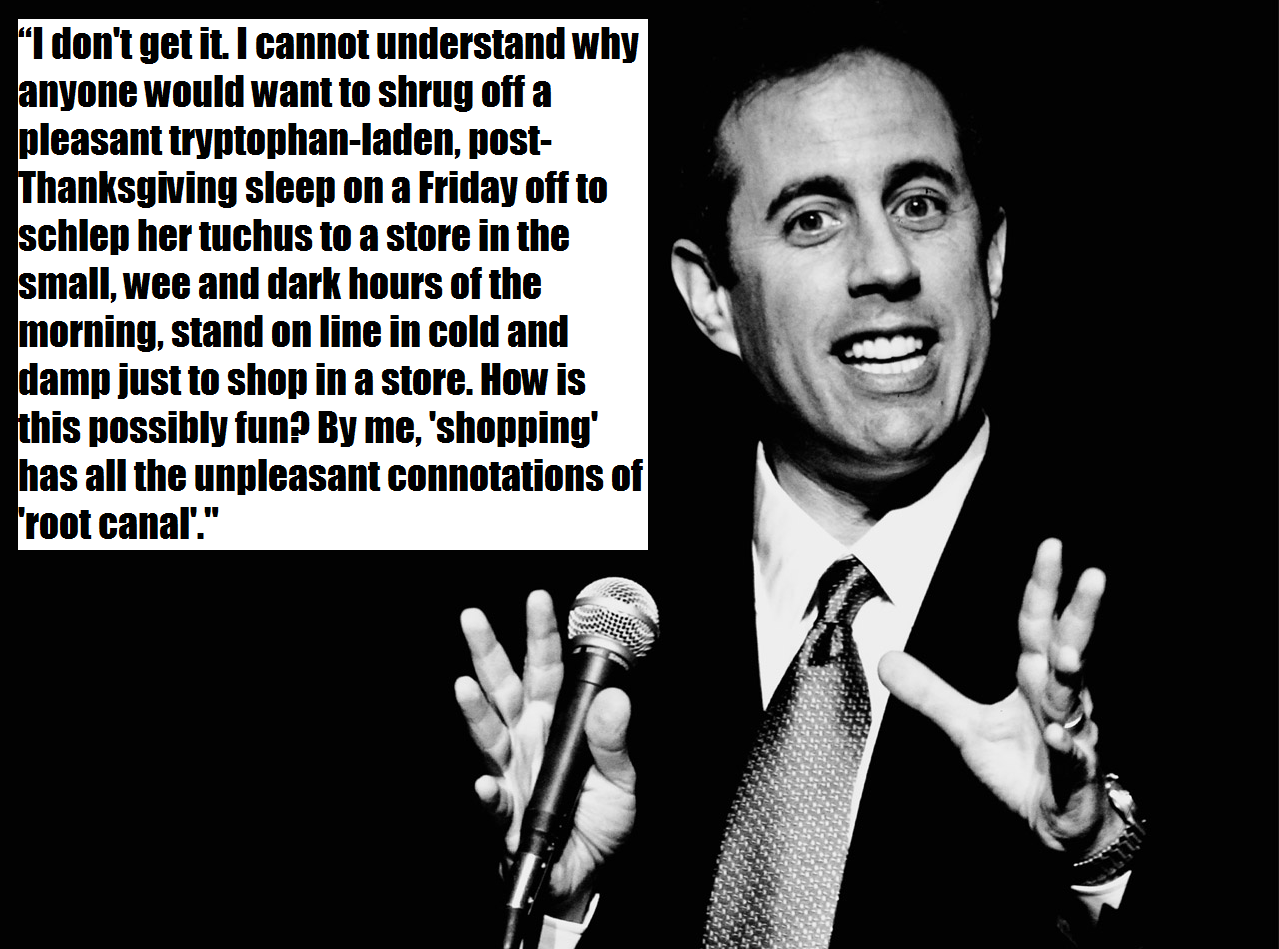 What's the deal with those Black Friday sales, amiright guys? Tip your waitresses! We're not sure if these Black Friday haters actually hate Black Friday, or if they're just upset because their Seinfeld-esque stand-up routine never took off. These jokesters wouldn't be caught dead standing in line on Black Friday — then again, they might make the trip just to have a captive audience. [Today] 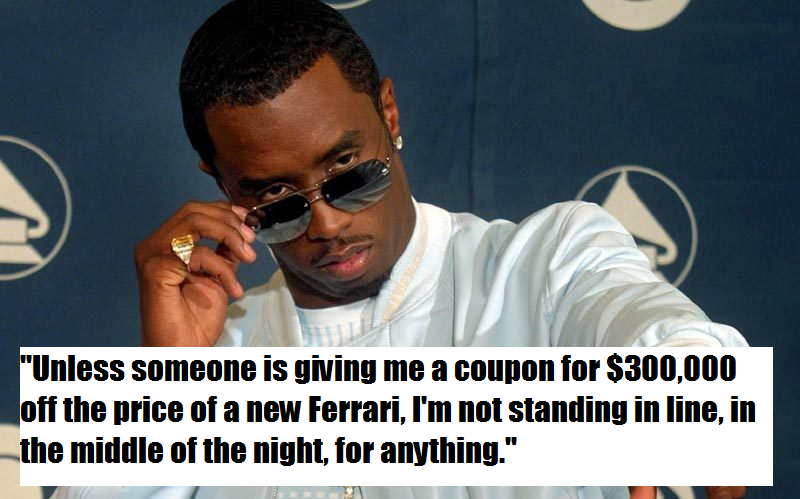 In the lyrics for "Young Gs", Sean "Diddy" Combs says he "can't relate to [people] who ain't go no cake." That's why we chose him to represent this bloc of Black Friday haters. Save money? Pssh, these Black Friday scoffers don't have to worry about pedestrian things like that! Who needs a sale when you've already got all the finer things? [Today]

Readers, did you recognize any of the types of Black Friday haters that we described? Have you experienced the the wrath of an Anti-Establishment Hater, or been the butt of a "Funny" Hater's jokes? Or perhaps you've thrown some shade of your own? Either way, tell us all about it in the comments below; you know we'll read them.

Rawmeat
What about the people who disdain Black Friday brick and mortar shopping when they can just turn to Deal News to see what great deals they can get shipped right to their front door through on-line shopping (almost any day of the year)?
November 13, 2013

That's $100 off and the lowest price we could find. Buy Now at Sam's Club

Most stores charge around $190. Buy Now at Walmart

Over 15,000 items are discounted, including shoes, dresses, jewelry, and tops. Shop Now at Nordstrom

Save a bundle on men's, women's, and kids' styles. Choose from mocs, boots, sneakers, and more. Shop Now at Merrell