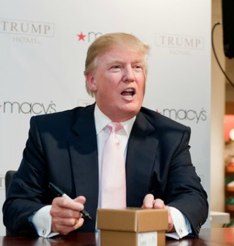 A few weeks ago, we asked our readers if there were any stores that they wouldn't buy from this Black Friday based on their experiences in 2011. About 32% said they wouldn't shop at Best Buy, likely because the electronics chain cancelled a slew of orders just days before Christmas. We expected this sort of response.

What we didn't expect, however, was that an additional 32% of our readers said that they wouldn't shop at Macy's this year. (Target and Amazon, for comparison, only garnered 13% and 10%, respectively.) Since we were unaware of a similar 2011 public disaster involving Macy's, we wondered out loud why such a high percentage of anti-patronage.

A helpful commenter pointed us towards a petition that's circulating about Donald Trump's involvement with Macy's. According to Businessweek, 500,000 people have signed it, asking for the retailer to cease selling Trump-branded products after the high-profile real estate developer repeatedly slammed Barack Obama on Twitter, following the President's reelection. (The publication also, hilariously, points out that as of yesterday, "$650 Trump suits were on sale for $249.99 and $69.50 dress shirts for $46.99.") Those who are offended or disturbed by Trump's comments might be put off by the relationship Macy's has with him.

However, our poll was conducted in October, long before this specific Trump tirade. Presumably, the shoppers who voted "no" to Macy's weren't swayed by his association; they just had bad experiences with Macy's on Black Friday, for whatever reason. That means that the current controversy has potentially stirred up an entirely new segment of shoppers who are displeased with the retailer, just a week before its most important shopping event of the year.

Given the preexisting hesitation and this new-found public spat, we think it's worth wondering aloud once again: Are you hesitant to shop at Macy's on Black Friday or otherwise? Are its deals too good to pass up, or will you take your business elsewhere? Do you even care about the store's association with Donald Trump? Sound off in the comments below.

jononymouse
Macy's has bigger problems if Trump can stifle sales.
The majority of Obama voters do not shop at Macy's anyways.
Macy's does not take food stamps!

ecinaj44
I won't shop at Macy's on Black Friday (or any other time) for completely different reasons: antique, fuddy-duddy customer service; unfriendly staff who seem easily overwhelmed (poor training, I suspect); and the offer of special discounts only to users of the Macy's credit card. I should be able to  use any card I choose and still take advantage of a retailer's best price. Macy's doesn't get this at all.
November 19, 2012

cilla
it seems that the reason retailers pay big bucks to people like Trump, etc. is because they expect
them to bring in business not alienate customers by being an megalomaniac and a stupid one at that.
November 16, 2012

Ross
I don't know if you were around during the 8 years Bush was in office, but there were marches through major cities just about every month protesting his administration.
November 16, 2012

montysups
Why no boycott over the federal criminal Martha Stewart?
November 16, 2012

adams77th
It's freedom of speech if you bash the right, it's intolerance of you bash the left.  Trump is no genius, but he's entitled to his opinion.  Anyone could be as successful as him if they use bankruptcy as a crutch.  As far as Obama, he wanted the job, made promises and didn't keep them. Almost 50% voted to get rid of him.  Right? Left? Who cares. How about we just be Americans and be thankful we have the rights over 90% of the world doesn't .
November 15, 2012

sharynj
I'm with the Donald.. He is an intelligent man and he knows what he's talking about.
November 15, 2012

wiwanski
the problem is not with trump being a despicable person that he is, but his call for america to march on washington the night obama was declared a winner of the elections.  that is beyond despicable, it's unpatriotic, undemocratic, it's against all the values which define america and democracy in general.
November 15, 2012

stevenmatrix
I'm definitely shopping at Macy's now.  They're get most of my Christmas shopping.
November 15, 2012

Kyser_Soze
I have several friends that voted for Romney because they despise socialism, but every month they cash their social security check and have their healthcare paid by medicare. And how disgusting is it for all of those people in New York and New Jersey with their hands out for government help after a little storm! Those dirty rotten socialists! Check out the Craig T. Nelson video about government aid:ttp://www.youtube.com/watch?v=yTwpBLzxe4U]
November 15, 2012

Kyser_Soze
The truth? Whatever happened to the earth shattering news his "team" of investigators supposedly found in Hawaii? That's right, it turned out to be a lie, the first of many. Also, not quite half.
November 15, 2012

Ross
There is a lot to criticize Obama for, what's the problem?  If anything I will shop at Macy's more.  The socialists had 8 years of Bush bashing, now they throw a fit when it's turned around?  Bush certainly had his shortcomings, but Obama takes it to a new level.
November 15, 2012

Kyser_Soze
Trump was on Letterman saying Obama was weak on China and that Romney would stand up to China. Then Letterman asked where the Trump branded ties were made, the look on Trumps face was priceless when it was determined that they were made in China.
November 15, 2012

canative454
Surprise, surprise those progressives love to speak tolerance, but not practice it.
November 15, 2012

games827
Many thanks to the grammar police. Now can we get back to what we all came here for.
November 15, 2012

games827
Dealnews should stay out of politics I come here to look for deals not to hear more of this crap.
November 15, 2012

operationajax
Yeah, blame Trump for speaking the truth...half of the people in this country feel the same as he does!
November 15, 2012

ShadoMakr
Just means that 500,000 socialists won't be there, don't worry Macy's the rest of us got your back!!!

Blog · Roundups · 1 day ago
Top 4th of July Sales: Get an E-bike at less than half-price in The House's sale
You can save on big-brand appliances at Best Buy (or Sam's Club, or even Lowe's), or score yourself a bike at The House, or take your pick from B&H Photo Video's electronics offers – they're all here in our roundup of the best 4th of July sales.

Blog · Morning Jolt · 1 day ago
5 Deals You Need to Know Today: Shop Newegg's 4th of July Sale!
Happy Colonialism is Bad Weekend, readers: please enjoy Newegg's celebratory sale. Check out this offer and more in our roundup of the five best deals we found over the last 24 hours.

Blog · Buying Guides · 1 day ago
When Is the Next Tennessee Tax Free Weekend in 2020?
The Volunteer State is having two sales tax holidays in 2020, and its Back to School event will be more generous than usual. Check out our guide on what to expect from the next Tennessee tax free weekend.

Blog · Roundups · 2 days ago
Top 5 DeWalt Deals: Save $20 on a 14" Chop Saw
As far as we're concerned, if you're going to talk the talk, you must DeWalt DeWalt. Or something. We've got five of the week's best DeWalt deals rounded up here, including a 14" chop saw, some saw blade sets, and a stackable tool organizer.

Blog · Marketplace · 2 days ago
6 Things NOT to Do When You Launch a New Product on Amazon
If you're craving a sizable piece of the Amazon pie, you'll want to know how to launch a product on Amazon. Read on to learn what you should avoid when you prepare for an Amazon new-product launch — and what to do instead.

Apply coupon code "PZY24" to bag the lowest shipped price we could find for this quantity elsewhere by $30. Buy Now at Proozy

That's $7 under what you'd pay at Target. Buy Now at Home Depot