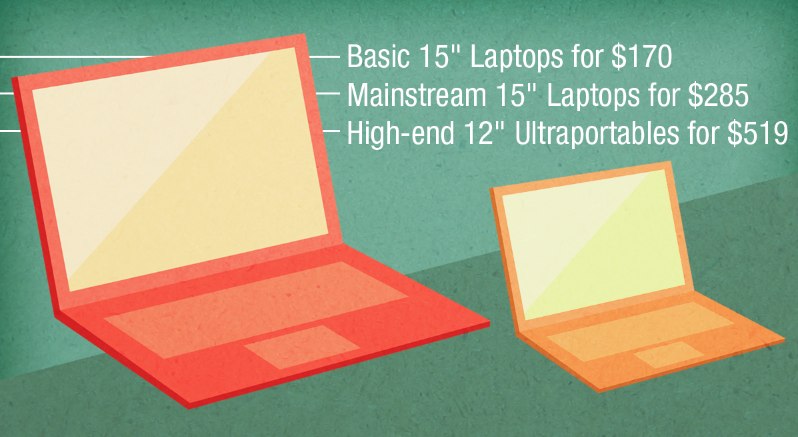 2013 was a roller-coaster year for the laptop industry. While we saw the introduction of a new, energy-efficient processor from Intel, much of the year was overshadowed by weak laptop sales. And although many analysts are predicting the death of the laptop, we know that when it comes to productivity, the laptop is still king. Plus, with laptop prices lower than they've ever been before, it's a buyer's market. But how far will your money go this Black Friday and which systems will see the best laptop deals?

Budget Laptops Unlikely to Drop Below $170

If your computing needs rarely stray from Facebook, Twitter, and the occasional YouTube video, chances are any laptop with a dual-core processor will suit your needs. For the past few years, we've called this category the "budget laptop." It consists of any 15" or 16" laptop with a dual-core CPU, be it from AMD or Intel. Deals on these systems have plateaued at around $179, which happened to be last year's best price. This year we think there's enough competition in this category to warrant a new low of $170. While that may not seem like a big drop, keep in mind that these laptops are priced cheaper than most tablets.

For most Black Friday shoppers, laptops with Intel's Ivy Bridge CPU will offer the best bargain. Sure, these notebooks use last year's processor, but that's precisely why retailers will discount this category more than most other configurations. So if you're in the market for a new notebook and don't want to hit the bargain bin, Black Friday is a good opportunity to get higher-end specs for less. As such, your best bet is to opt for a mainstream 15.6" Core i5 Ivy Bridge laptop. This Black Friday we predict that such configurations will drop to as low as $285. That's roughly $15 under the best price we've seen to date for these systems, and an absolute steal for a laptop that still has the horsepower to take on most tasks.

If you want a system that offers more power than a budget laptop, but still costs less than a Core i5 notebook, we suggest looking at 15" Core i3-based systems, which we believe will hit $239. Generally speaking, these systems can outperform budget laptops, but without the higher price tag of their Core i5 counterparts. These systems might be particularly useful if you're big on streaming services such as Netflix or Hulu.

As a result of the ongoing feud between notebooks and tablets, laptop manufacturers have focused heavily on thin, ultra-light designs. And though a few years ago such systems were a niche product, today they're one of the most sought-after laptop categories. For our Black Friday prediction, we looked at ultraportables with Core i5 Ivy Bridge chips and 12" displays. Although we predict deals will appear around the $519 mark — the lowest ever for such a laptop — this category will remain pricier than the aforementioned mainstream options since the lighter weight and thinner design are costly features.

Likewise, if you're intent on purchasing a newer laptop with an Intel Haswell processor, which was released in early summer, keep in mind that these systems will cost almost twice as much as your mainstream Ivy Bridge system. For shoppers who remain unswayed, we recommend buying a 15" to 16" Core i5 system. They're cheaper than Core i7 laptops and have seen more deals in the short time frame that they've been on the market. To arrive at this prediction, we looked at Black Friday price cuts on last year's crop of Core i5 Ivy Bridge laptops, since that was the big chip of the year. Prices fell a meager 0.25%, and to date Haswell Core i5 15" laptops have bottomed out at $408, so we expect this year's Haswell systems to see modest discounts with a final price of $399.

Lindsay Sakraida (DealNews)
@jbwhite99 I'd just like to point out that there's a $178 laptop being advertised already: http://dealnews.com/...op-black-friday-ads-so-far/
November 15, 2013

jbwhite99
As much as I would like to get a $169 laptop, please be realistic. Component costs have gone UP this year (memory is double January's price, and everything else is flat). Microsoft gets almost $50 for Windows, and screen, battery, CPU, HDD, etc. costs have not dropped as years past. The only reason that we could see these prices is if some company really wants to buy market share. Dell may desperate to make one last push in PCs, or some no name like ASUS, etc. But it won't be a big name like Lenovo or HP, the #1 and #2 PC companies in the world, respectively.
October 2, 2013

New
Crutchfield · 1 hr ago
Outlet TV Deals at Crutchfield
up to $2,780 off
free shipping