By the dealnews staff 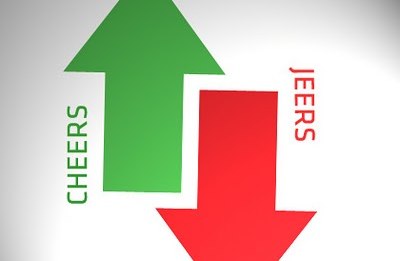 Another Black Friday is in the books, and while you have another day of good deal-shopping ahead of you on this lovely Cyber Monday, it's time to assess the deals we've seen so far. Who served consumers well, and who stumbled? Read the sixth annual dealnews awards for the best and worst of Black Friday to find out!

Cheers to Black Friday, which stepped up its game this year, surpassing Thanksgiving in the total number of Editors' Choice deals. That's the opposite of what happened in 2011. Black Friday also edged out Thanksgiving for select categories, with a greater number of top deals for HDTVs, laptops, home and garden, and gaming and toys.

Jeers to the Google Shopping tool, which crashed for several hours early morning on Thanksgiving. The price-sorting service has lately become difficult for consumers, as it omits Amazon and Walmart from many results. And on one of the most important shopping days of the year, shoppers were temporarily out of luck if they wanted to use the tool to compare prices on often short-lived sales.

Cheers to Amazon for adjusting prices throughout the week to match other retailers's deals. In some cases, the mega store seemingly took note of discounts that other stores had announced in their Black Friday circulars, then dropped its own prices before the competition. Amazon wasn't the only store to price match and strategically undercut, but it did it the most effectively.

However, jeers to Amazon for "lightning" deals that, once again, were essentially 100% claimed the second they started. An example: a choice Lenovo dual-core 16" laptop deal was going for $200, but was out of stock within 30 seconds. We appreciate mind-boggling prices, but the online equivalent of doorbusters seem to be beyond the reflexive capabilities of most human shoppers.

Jeers to Best Buy for continuously advertising "free shipping on everything," then erratically adding a $3.50 shipping fee during checkout. The store also bizarrely stopped charging sales tax at the point of placing the order, since its "tax calculation system" was temporarily down. That means customers would be charged tax at a later time, and if you didn't want to be surprised when you checked your bank statement, it was up to you to figure out what that amount might be.

Cheers to cell phone deals that yielded a net profit. Last year, we saw a plethora of trendy Android phones that were free with new 2-year contracts, and this year, stores took it one step further by offering gift cards that surpassed the amount they charged for the phone.

Jeers to a handful of temporary site outages throughout the week. Dell Home, Best Buy, and Canon all had glitches at some point. This was sometimes at night or very early in the morning, but those are prime shopping hours for Black Friday week.

Similarly, jeers to stores that made it exceedingly difficult to check out. Walmart and TigerDirect sometimes took several minutes to load, while hhgregg reportedly "shut down" for maintenance moments after releasing a doorbuster; when it returned, all items had sold out.

Cheers to newegg for not requiring coupons for many of its best deals; it is somewhat tedious to apply a coupon with the site, as they require you to sign in before even testing a discount. So this turn of events was a welcome change.

Cheers to the first refurbished iPhone 5 deal arriving ahead of schedule. Based on past deal data, we projected that service providers wouldn't start offering iPhone 5 refurbs until January, but AT&T beat everyone to the punch about a month early.

Jeers to Apple for not offering free shipping on all items in its Black Friday sale. The online branch of the Apple Store has offered free shipping with no minimum since 2006, when it first joined in on the Black Friday game, but not this year.

Jeers to MidnightBox for a misleading sale. It took 20% off all past offers, implying that many former promotions would now be even cheaper. However, according to our archives, this was not the case because the store inflated its starting prices.

Cheers to storage deals, which returned to Black Friday week 2012 in full force. Last year, we were disappointed with hard drive promotions, since the industry was badly hit just the month before by floods in Thailand. This year, it appeared to bounce back, as we saw a 40% increase in the number of Editors' Choice offers for all storage deals.

Last, but not least, a massive cheers goes out to the dealnews staff. Our writers, editors, and beyond worked extra long hours, not only on Black Friday, but also on Thanksgiving. They sought out and tested hundreds of deals, so our dear readers could save money and time, all while avoiding the in-store madness.


Black Friday may be over, but there's still many stellar deals to be had today. Be sure to check out the sales as they come in, and consider setting up an email alert for the category or product of your choice.

Hope51
Thank you for the update, eeryee.  I heard yesterday that the people that were shot were only injured--so, it's sort of a happy ending.
November 27, 2012

Dan de Grandpre (DealNews)
Sears (and Kmart) are the absolutely buggiest web sites to use that I can think of. Prices mysteriously jump when you add to cart. It's in stock? No it isn't! Kludgy navigation. Heavy pitches of service plans you don't need. Coupon codes that maybe work, maybe not. So if Sears has good prices that you can't get because of its horrific online shopping experience, I wouldn't give them a cheer.

Just now, I went to ttp://Sears.com[. Its icon at the upper right says I have one item in my shopping cart. [Click] "Your shopping cart is empty."

bowieballer
Why no cheers for Sears?  In my opinion, they were tops for BF deals on many items - 32" LCD for $97 (Wal-Mart had theirs for $147), 50" Toshiba LED for $299 (Next closest I saw was Kmart and that was not LED), KitchenAid Professional 500 Stand Mixer for $199 (Target had the Classic for this price), Brave on 3D Blu-Ray for $8 (Wal-mart had on regular Blu-Ray for $8.96) and many others.  Not to mention that unlike Best Buy's BF online presale that requires you spend $2500 per year to be eligible and did not include any of their hottest doorbusters, Sears did a presale that anyone with their free membership could access and they put their best doorbusters online!  I don't shop there often, but how could they be overlooked?
November 27, 2012

T-Bone
You guys forgot to give a big jeers to Amazon for their website glitches as well.  Happened to me during a lightning deal and it kept me from signing in long enough for the deal to disappear.  Got the same item a day or two later even at Wal-Mart though so I'm happy.

Also, thanks to you Dealnews staff for an excellent job

deprotinator
Jeers - big time JEERS - to Staples for advertising a laptop that some of their stores don't even have.  I stood in line for over an hour only to be told by the store manager that he tried to get one on that morning and it's out of stock...and he had no other way for me to purchase this deal.  Who waits until Black Friday to stock up on items in their Black Friday ad?  Then Staples won't even take the customer's money when I wouldn't mind taking a rain check.  Complete waste of people's time and totally unethical way of bringing people to the stores...and they wonder why they're losing to Amazon.
November 26, 2012

DREGstudios
Is nothing sacred?  This week proved the holidays have slipped away from the general public and been completely bastardized by Big Business.   The traditional meaning of Thanksgiving and Christmas both have been diluted by mass consumerism.  Read more about the War on the Holidays and American Values being waged from the buildings of Wall Street  at ://dregstudiosart.blogspot.com/...turkeys.html[/ur where one Turkey gets his revenge for encroaching on Thanksgiving this year!
November 26, 2012

janecote253
I too got great tips from dealnews. But I was surprised to not see 'jeers' given to Home Depot. The fact that they kept their ad secret right up until black friday is just silly, and a lost opportunity for them. I did go there on black friday, and some deals weren't bad; but they had such few customers compared to anywhere else I went that day. They really need to re-think their marketing strategies, in my opinion.
November 26, 2012

vv9898
Thank you Dealnews Staff! for all your hard work!! Your efforts was put to good use & greatly appreciated!!
November 26, 2012

Emily Dovi (DealNews)
Thanks so much! Would you mind writing up a review for it?
November 26, 2012

Kingsleymalta
I just wanted to add a "cheers" for DealNews' phone app! My dad and I both downloaded it onto our droids, and proceeded to spend all day Thursday and Friday scrolling on our phones. YOUR APP ROCKS!!
November 26, 2012

Hope51
The Tallahassee Wal-Mart had a shooting incident on Black Friday.  The irate shopper apparently wanted a particular parking place and killed two people near the front of the store to get it.  I don't think there is a suspect in custody.
November 26, 2012

KarlaF
Yeess cheers to you dealnews staff! Thank you for making our shopping experience so much better every year:)
November 26, 2012

VIEW ALL
Blog · Roundups · 6 hrs ago
The Best iPad Deals
iPads come in a range of sizes and with a variety of features, and our experts here at DealNews can help you find deals on iPads that fit your budget. Check out the iPad deals and iPad sales our experts have found.
Blog · Morning Jolt · 10 hrs ago
5 Deals You Need to Know Today: Exclusive Apple App Trials from Target
Just by signing up for a Target Circle membership, you'll get a combined year and a half of Apple trials, including Music, TV+, and Arcade. Check out this offer and more in our roundup of the five best deals we found over the last 24 hours.
Blog · Buying Guides · 11 hrs ago
7 Must-Have Power Tools for Homeowners
Simple toolkits can help you with small jobs around the home, but you may need something with more kick. Check out the power tools every homeowner should have to learn about products consumers swear by.
Blog · Roundups · 1 day ago
The Best Electronics Deals
From TVs to turntables and smartphones to Switches, there's a grand plethora of electronics deals to pick from, so we've narrowed it down to five of the best to help you choose. The results will shock you! (Hopefully not from faulty wiring.)
Blog · Marketplace · 1 day ago
Should You Use Walmart Fulfillment Services?
Walmart Fulfillment Services is an emerging program from the nation's largest retailer. But should you use this Walmart fulfillment offering? See how to get started and what the requirements are before jumping in.

That's the best price we could find by $17. Buy Now at Overstock.com

That's $249 off list and the lowest price we could find. Buy Now at Michael Kors

It's at least $12 below what you'll pay elsewhere for a physical copy or eBook. Hands-on materials and advice help cultivate agility, camaraderie, and collaboration for getting ahead in today's remote-working world. Shop Now at TradePub

Apply coupon code "SAVENOW" to take $12 off list and get the lowest price we could find. Buy Now at Green Man Gaming