Some writers will now be paid based on how many pages of their books are read. This might have side effects....
BY:
JEFF SOMOGYI
DealNews Contributing Writer 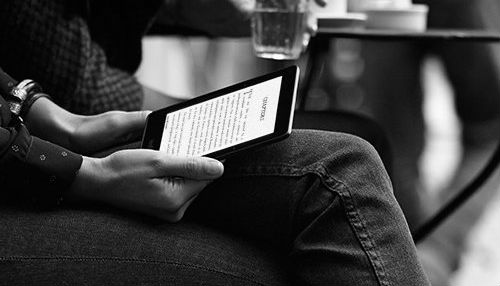 In news that sent shock waves through the writing community, Amazon has decided that it'll change the way certain authors will get paid for their books. Under the new rules, if a book is part of Kindle Unlimited or the Kindle Owner's Lending Library, then a writer will be paid a small amount for every page of their book that's read!

What Was It Before?

Under the previous contract, scribes would get paid for every download, no matter if the downloader read the book or not. It's said that authors of longer books complained, asking why authors of shorter books were being paid as much as the long-winded scribblers. Shouldn't a longer book be worth more money?

So, in what seems like a real spiteful move, Amazon made it super fair, but in doing so, somehow makes it feel super unfair.

You know the easiest way to keep people reading?


Ask them a question that isn't answered right away. Or set up a dangerous situation that isn't resolved in the very next chapter. That's right, you get people to read by employing a "Dan Brown style" — dropping cliffhangers and mysteries all over the place.

The fear is that this new payment system rewards people who write like this — and punishes those who don't. Though not a bad style of writing, per se, imagine if every book was like this? It could happen, if authors find them profitable.

It's Not Just Books

Ever notice that summer movies all have things in common? They're action films, with big stars, and lots of explosions. This is because that's what people bought tickets to last summer... and the summer before that... etc. Amazon's new pricing scheme could be the first step down a similar road for ebooks. Every one will be a summer blockbuster.

Now, we're also not slamming the popcorn flick either! Mad Max: Fury Road was the most summer block-bustery film we've ever seen and it was great! But, again, variety is the spice of life.

Of course, every generation has screamed that media is being dumbed down for the masses and that the end of any "highfalutin" content is nigh. "Dumb" things like rock 'n roll, comic books, and the Macarena (just to name a few) were all supposed to be heralds of the end of intelligent and meaningful art as we know it. They weren't. Of course, none of those things were trying to change the way Elvis was paid from a per-album fee to a per-hip-swivel contract.

But even changes to payment and publishing practices haven't killed art. While albums as an art form might be declining from their vinyl heyday, singles are hotter than ever, with more access for both artists and fans. Dickens and Tolstoy published their novels serially, but the 21st century masters of fiction managed to do just fine (and be a bit more brief) publishing novels all at once. Similarly, all-at-once releases of online content is producing some of the most critically-acclaimed shows today.

So this might just be one of those changes that seems bad, but then everything turns out alright in the end... or will it?! (Cliffhanger ending, to keep you coming back!)

Will Amazon's new payment scheme lead to worse quality books, or a fairer payment for quality authors? Tell us your thoughts, in the comments below.

HarryTuttle
Didn't read the whole article, but I got the gist of it.

Every good writer knows; nobody, but nobody actually gets what they deserve

archielee
This applies when someone downloads the book using either Kindle Unlimited (monthly flat fee subscription) or the Lending Library (monthly free download for Prime) not when they buy the book outright. if you have "unlimited" you could be downloading a lot of books but not reading them so why should the author be compensated. for the lending library you could likewise download a book and after starting to read it find that its not that great. Now if they could add a feature to the lending library so readers could cancel their monthly selection (if they don't read beyond the 2nd chapter) and then choose a different book, that would be great. If people buy the book outright the author gets paid whether or not we even read past the first page. this seems fair in that it compensates authors of interesting books.
June 25, 2015

What if you are a speed reader?

There will be a quiz after each chapter, and a book report due at the end.

Jeff Somogyi (DealNews)
@dunoreo
I like the idea of changing reading habits, out of guilt for author remuneration. Just because I didn't like the book, I don't want the author to be punished for that! They worked hard.
But, if we all scroll to the end of a book, will Amazon be forced to institute a algorithm wherein they only count pages that were paused on for x seconds, to prove they were actually being read?!

dunoreo
Wow, what a dilemma. I, in the past, have read every word of an ebook. but Amazon probably does not know because I have the wireless one (Christmas Present) and If I am not standing in the soft warm glow of an access point, I don't sync or rate the ebook on the spot. I file it to a collection and get on with my readin'. While I love the idea of dumping a real stinko book, and possibly sparing other readers the pain (oh, the pine!)... If I read a favorite book over and over, does that author make more money? I amazon going to start charging by the word? Should I change my reading related behavior to make sure the poor starving authors get their pittance? These questions are too hard, need more coffee! (and a good ebook)
PS autocorrect should think ebook is a word, it is 2015!
June 25, 2015