Black Friday 2014 Cheers & Jeers: What Store Had the Best Deals?

Amazon definitely had the most Editors' Choice deals, but almost a third of them were instances where a competitor offered the same price.
BY:
LINDSAY SAKRAIDA
DealNews Contributing Writer 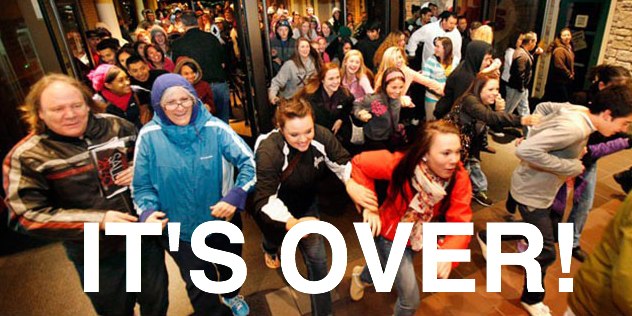 Everybody take a deep breath: Black Friday has come to an end. While there are still some Cyber Week sales to consider, and an onslaught of holiday promotions on the horizon, we can at least close the book on Black Friday 2014.

And as we do so, we've got some amusing tidbits from #BF2014 and some major gripes to share. Which retailers made the week awesome, and which just made the week more difficult? Check out our list below, and then voice your own props and grievances in the comments section. (You know, for posterity.)

And Some Big Jeers to:

Last, but certainly not least, a big CHEERS to the DealNews staff! Our writers and editors worked long hours to find and research the best deals for you bargain-loving people. We hope you all found something you wanted this Black Friday.

Readers, who do you think won Black Friday? What was the best deal, and did we miss any major cheers or jeers? Sound off in the comments below, and be sure to vote in our poll.

guruhebbar
I only followed Dealnews and as usual , still am sure i got the best of the bests. if its not on dealnews i didnt bother to waste my time browsing any other retailers site...thanks a lot dealnews team. Hats off!
December 9, 2014

nimer
SUPER CHEERS and a million thank you to Dealnews staff! You guys kept the site up-to-date more than any other deal site! You rock!
December 9, 2014

mike01001
I can't remember if it was a black Friday deal, But Staples offering the Samsung Galaxy S4 7" tab for $100 was a steal. And to a lesser degree the 8" at Costco for $180. And both were successfully purchased. Thanks for the heads up from Dealnews for both of these.
December 8, 2014

jlc2014
I agree about the useless Belk coupon! I shopped at the store on Thanksgiving and bought a dozen or so (nice) clothing items, dress pants, flannel shirts, jeans, socks, etc. and the coupon didn't work on a single item! The receipt was longer than my arm, but no 20% off. But I usually love Belk so I'll forgive them, this time.
December 8, 2014

michael bonebright (DealNews)
@nagol68
I know that feel. Every major price drop in the Steam Sale was beaten elsewhere, which was just annoying.
December 5, 2014

nagol68
I was actually quite disappointed in the video game sales this year. Last year I picked up Just Dance 2014 and Battlefield 4 for $15 each at Gamestop. There where also tons and tons of great video game lightning deals on Amazon last year, this year there was very few.
December 5, 2014

Lindsay Sakraida (DealNews)
@yolanda.cooley Oh man, I wish I had shopped that $10 ballet flat sale. My shoes are a joke at the moment.
December 5, 2014

yolanda.cooley
Select clothing stores were also a steal. I got an extra 50% off clothing from Torrid as well as some amazing deals on eBay (real leather ballet flats for $10!) those in conjunction with Ebates and cash back from my credit card made all my items 70% off or more.
December 5, 2014

joeemison
Timbuk2 had some crazy good prices on Thanksgiving, giving 80% some great items and allowing large quantities to be purchased.
December 5, 2014

okayTodd
Amazon for years had been my #1 Black Friday destination. This year Amazon just didn't care. No Blu-ray DVD calendar, no outstanding deals or finds. What happened?
December 5, 2014

chocolatedeath
Didnt see not one TV deal on Amazon.If you didnt notice they also didnt have a blu ray player either. Ok. I saw one tv and one player. Bought the movie Frozen on Walmart.com only to have them to cancel it six hours later. Bought 2 Tvs from Walmart.com only to have them to cancel both after 3 hours. In my mind Staples won. I got a Keurig for 80 bucks plus a 20 dollar gift card. A 150 dollar office chair for 50 bucks. Bonton had their coffee k cups for 60 percent off.
December 4, 2014

VIEW ALL
Blog · Morning Jolt · 8 hrs ago
5 Cyber Monday Deals You Need to Know: Save on Samsung TVs at Amazon
It's Cyber Monday, Black Friday's cousin that was named by Uncle Discount after watching The Matrix eight times in a row. But it brings discounts – for example, on a large selection of Samsung QLED and OLED TVs at Amazon. Check out this offer and more in our roundup of the five best deals we found over the last 24 hours.
Blog · Consumer News · 5 days ago
Black Friday vs. Cyber Monday: 8 Ways the Shopping Holidays Differ
Last year, U.S. consumers spent more money online on Cyber Monday than they did on Black Friday. But are Cyber Monday deals as good as Black Friday offers? Check out our guide to learn how these two shopping holidays differ.
Blog · Buying Guides · 6 days ago
The 41 Best Black Friday Gift Card Deals in 2022
Gift cards may have a bad reputation for being impersonal, but the truth is that they make great presents. Check out the best Black Friday gift card deals of 2022 for gift ideas that reward the giver, too.

That's the best price we found by $17. Add them to the cart to see the discount apply. Buy Now at Levi's

It's the lowest price we could find by $45. Buy Now at Amazon

Get 50% off full price items, plus an extra 60% off sale styles with coupon code "CYBERMONDAY". Shop Now at Reebok

That's the lowest price we could find by $4. Buy Now at Sam's Club