Prime subscribers will get news articles for free for six months, then 60% off after that.
BY:
BENJAMIN GLASER
DealNews Contributing Writer 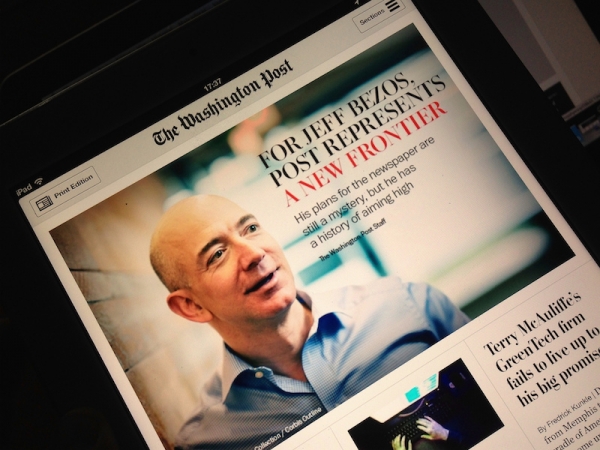 Amazon announced this week that its Prime subscribers will receive six free months of the Washington Post, followed by a heavily discounted monthly fee.

The Post was bought by Amazon founder and CEO Jeff Bezos in 2013, and although the purchase was a personal one, synergy between the two companies was always expected. Previously, owners of Amazon Kindles had received the Washington Post app pre-installed, and had been given a similar offer of free and then discounted Post access.

What It Costs and How to Get It

Under the new offer, Prime subscribers will receive six free months of access to the Washington Post. After that, it will cost $3.99, a 60% discount from the usual $9.99 a month. In other words, the Post subscription will cost $48 a year, instead of $120.

To take advantage of the deal, subscribers just need to sign in on the Washington Post using their Amazon Prime accounts.

By comparison, an All Digital subscription to the New York Times costs roughly $35 a month, or $455 a year. An Amazon Prime subscription costs $99 a year.

The Post has had a paywall since 2013, currently offering visitors 10 free articles a month (though numerous strategies exist for getting around the paywall, like going through Google instead of directly through the paper's homepage). It also recently started redirecting users who use an ad blocker, asking them to disable it before reading an article.

Lots of Prime Perks — For Now

Though best known for offering free two-day shipping on all orders, Prime has long been building a roster of perks meant to attract and keep users who will live their lives increasingly within the Amazon ecosystem. These include, but are not limited to, some free streaming on Amazon Instant Video, including Amazon's original content like Transparent; free books for Kindle; photo cloud storage, and more.

As Fortune states, what Amazon's doing for the newspaper publishing industry is similar to what it has been doing for book publishing: slashing prices even to the point of loss to expand customer base and market reach. Prime has an estimated 40 million subscribers in the US and even more abroad, and it's likely that only some are already Post subscribers.

Of course, Amazon's book strategy angered publishers, who sued and forced the seller to charge higher eBook prices. Similarly, all that free and fast shipping has begun to take its toll, with Amazon and other retailers offering incentives if shoppers choose slower shipping options. Will Amazon be able to maintain this subsidized news? The announcement suggests that the discounted Post rates will be good for life once subscribers lock it in, but notes the offer is for a "limited time."

The cost cutting measures are "good for readers — not so good for competitors," Fortune notes.

Are you an Amazon subscriber who will now sign up for the Washington Post? Or maybe you're a Post subscriber who now has more reason to get Prime? Let us know in the comments below.

vnzjunk
If the payments for your subscription vary in amount, we will tell you, at least 10 days in advance, the date and amount of your next payment.
September 18, 2015

vnzjunk
I think it is disingenuous to advertise it as FREE when in effect the first 6 months are free and then you are AUTOMATICALLY billed the discounted monthly rate after 6 months unless you unsubscribe. I think that they could have provided this little tidbit up front in stead of making you dig through to the last signup step to see the detail.
I'll just continue to read for free without giving up my credit card number or billing info. And if that free reading option is cancelled then I will just read another paper. They are not the only game in town.

By clicking 'Start my subscription,' you agree to pay $3.99 per month after the initial 6-month term,and you agree to The Washington Post's Terms of Service, Digital Products Terms of Sale & Privacy Policy. You also agree that Amazon Payments may use your selected payment method for future purchases and payments. Learn More about Amazon Payments. You may cancel at any time.

The article has been updated with this information.