Amazon Now Lists Metacritic Scores: Is This a Buyer's Boon or a Critical Error? 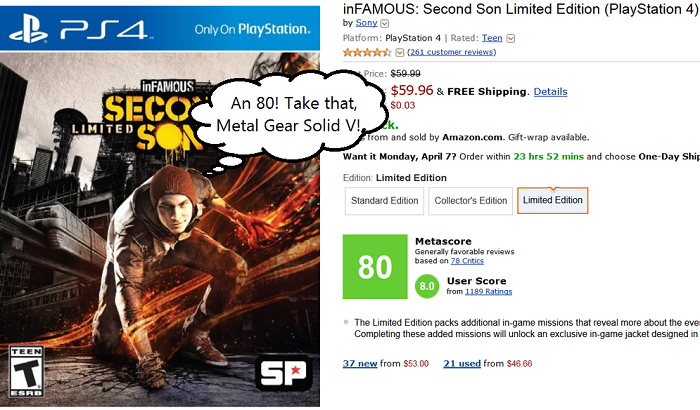 Lost in the hubbub over Amazon's Fire TV announcement and launch was a smaller, but no less significant change to the megaretailer's website: Amazon started listing Metacritic scores on its video game product pages.

The change was not missed by the Internet, of course, which immediately divided itself over the move. Proponents claim the change will help shoppers avoid wasting money on awful games. However, critics of Metacritic itself point out that the site's grading system is controversial at best, misleading at worst. What does all this mean for the budget-minded gamer? Read on for our in-depth take.

For those who aren't familiar, Metacritic is a site that collects reviews from critics and creates what it calls a "Metascore." According to the site's FAQ, "a Metascore is a weighted average of reviews from top critics and publications for a given movie, TV show, video game, or album." The site won't reveal how it calculates those scores, though. While Metacritic offers scores for all kinds of media, the site has really only faced significant controversy for its video game Metascores.

In recent years, Metacritic's lack of transparency has come under fire because Metascores are increasingly important to game developers, studios, and publishers. Predicting a game's Metascore — an entirely unpredictable aggregate based on subjective opinions — is now part of the contract negotiation process. "There are conversations I've had [with publishers] in which the royalty that we could get was based upon getting a 95," Obsidian Entertainment head Feargus Urquhart said in an interview with Kotaku. "I said, 'Okay, there are six games in the past five years who have averaged a 95, and all of those have a budget of at least three times what you're offering me.' They were like, 'Well, we just don't think we should do it if you don't hit a 95.'"

Not So Great for Gaming, Not So Awful for Game Buyers

While the gaming industry's use of Metascores is decidedly not cool, it's worth pointing out that sites like Metacritic and Rotten Tomatoes are providing a very valuable service to consumers. "I find aggregation sites like Metacritic and Rotten Tomatoes to be accurate a large majority of the time," Forbes' video game reviewer (whose scores are not considered on Metacritic) said. "While an 85 game might feel like a 90 or 80 to some, very rarely will a high-rated game be terrible and a low-rated game be a gem. If you relied simply on one critic, this would almost certainly happen sometimes, but through aggregation, a line of quality begins to emerge."

Ultimately, one has to wonder what Amazon gets out of this deal. The Metascores are not appearing on anything other than video games at the moment, despite the fact that Metacritic scores all kinds of media. If a potential buyer doesn't trust the Metascore, they can always click on it and read the individual reviews. Alternatively, they can scroll down to see what other Amazon customers think of a game.

Whether or not this partnership between Amazon and Metacritic lasts, there's no question that the score aggregation site has become a powerful force in the gaming industry and a useful tool for consumers. We've even referenced Metacritic scores in our video game roundups. Like similar sites such as Rotten Tomatoes, Metacritic can definitely change our spending habits. Whether this is a good change remains to be seen.

What do you think, readers? Has Amazon made the right move in adding Metacritic scores to its pages? Or does this decision spell disaster for quirky, low-budget games? Take a side in the comments below!

phear3d
this isn't a great idea.

think of Best Buy doing the same thing by placing stickers onto their game library selections on how terrible a game is. sure there are a lot of great games to buy, but there's a ton of games which has a 5 or less score. no one's gonna wanna buy a game that was reviewed less than a 5 so it's not going to help either amazon or it's 3rd party sellers.

de1337er
I think it's for nothing other than to make the consumer feel they're getting a better shopping experience. Sure it may lose a few sales, but it may prevent Amazon from giving out a lot of $10 credits to people who complain about some of the abysmal games Amazon sells.
April 9, 2014

Jeff Somogyi (DealNews)
It's like I can't trust other people to give me my own opinion, anymore!
April 9, 2014

josef1221
The reviews on Metacritic are just as subjective as the user reviews already on Amazon, so I don't think this is a big deal. I actually like it since I will have easier access to more reviews/opinions of a game before I decide to buy it.
April 8, 2014