The Kindle 2, Amazon's eagerly-awaited follow up to the Kindle, has made its official debut. With a lower price tag and slimmer design, it's already won the hearts of Kindle fans, but can it help the average book reader save money too?

Weighing in at 10.2 ounces, the Kindle 2 is both lighter and taller than its first-generation predecessor. In addition to its new form factor, Amazon also trimmed 0.4" off the new Kindle's waistline, making it one of the thinnest e-Book readers available. But despite its new design, the Kindle 2 is wider than the original. Amazon is hoping the extra width will make it easier and more natural to hold. Other improvements include a 5-way navigational controller and new page turn buttons designed to avoid accidental button pushes.

Features & Connectivity
With its 16-level gray scale screen, the Kindle 2 packs one of the best e-Book reader displays we've seen, trumping the displays found on the original Kindle and on Sony's PRS-700, both of which only handle 8 levels of gray scale. Unfortunately, while the Kindle 2's display might be great for books, it still lacks color and will seem outdated for reading blogs, newspapers, and magazines.

For connectivity, the Kindle 2 uses Amazon's Whispernet data service for downloading content. Whispernet relies on Sprint's 3G EVDO network, which means you can expect fast speeds when connected. However, with no Wi-Fi support you'll be limited to downloading content from CDMA-only territories. Fortunately, you can always pre-load your Kindle with content or manually transfer books from your computer to your Kindle (via USB) should you find yourself overseas.

The new Kindle now supports text-to-speech, which Amazon calls "Read-To-Me." This gives consumers the option of having the Kindle 2 read out loud via its new stereo speakers. (There's also a standard headphone jack.) Read-To-Me is fully customizable and works with books, magazines, or newspapers. In addition to text-to-speech, other new features include a faster page refresh (20% faster than the original Kindle) and a redesigned QWERTY keypad. Amazon has also fitted its new e-Book reader with 2GB of memory. However, its SD card slot is now gone. 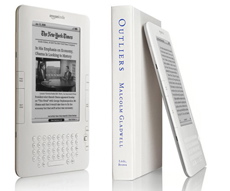 Although there's no precise battery spec, the new Kindle claims to pack 25% longer battery life than the original. Amazon claims it will last up to five days on a single charge or for over two weeks with wireless turned off. The battery also charges fully in 4 hours and can now be recharged via USB.

Value
At $359, the new Kindle is $50 under the price of Sony's top-of-the-line PRS-700, but still far from being an impulse buy. (Check out our previous e-Book Reader feature to see how it stacks up to the competition.) Factor in the subscriptions and e-Book pricing and you could end up spending more than you bargained for.

The same principle applies to e-Books. While most new releases and New York Times best sellers are discounted at $9.99 each, other books aren't as deeply discounted. For instance, the Kindle version of Joe Torre's "The Yankee Years" is priced at $13.34, but sells for $14.82 as a hardcover at Amazon.com ... a "savings" of $1.48. Meanwhile, Jose Canseco's book "Vindicated" costs more as a Kindle download ($14.27) than it does as a paperback ($10.20). In fact, most paperbacks were significantly less expensive on Amazon.com or Half.com than they were at the Kindle store.

Yet another setback is that for the price of a discounted e-Book, you could be renting two books per month at sites like BooksFree.com. Add in DRM protection and suddenly the Kindle's content seems pricier than it should be. It's also worth noting, despite Amazon's impressive e-Book catalog, not all of your favorite books and magazines may be available in the Kindle's format.

Book selection aside, the Kindle's high price of admission and lukewarm subscription and e-Book deals do not make it a bargain purchase. Avid readers can save more money by joining Netflix-like book subscriptions (like BooksFree) or local book clubs. It won't have the same panache as carrying around a Kindle, but at least you'll have extra money in your pocket.

(For more information on saving money on books, check out our previous feature on books.)

Click ahead for a side-by-side breakdown of the Kindle 2's new features.

VIEW ALL
Blog · Morning Jolt · 17 hrs ago
5 Deals You Need to Know Today: Under Armor Outlet Discounts
There's up to 40% off at Under Armor for all plus extra savings for those who spend $100 or more. Check out this offer and more in our roundup of the five best deals we found over the last 24 hours.
Blog · Buying Guides · 1 day ago
What to Expect From Father's Day Sales in 2022
Father's Day is around the corner, and sales will be in full swing before you know it! Check out our guide on what to expect from Father's Day sales in 2022, including what will be discounted and the savings we should see.
Blog · Marketplace · 2 days ago
How to Create Coupons on Amazon
Amazon brought coupons to Seller Central in 2017, but these aren't your grandmother's coupons. Learn how to create coupons on Amazon, and what to know before you do.
Blog · Buying Guides · 3 days ago
6 Simple Ways to Renovate Your Kitchen Through Home Depot
If you're feeling like your house needs a refresh, consider these simple ways to do a Home Depot kitchen renovation. You can update your look and potentially increase your home's value!
Blog · Buying Guides · 6 days ago
What's the Best Time to Buy Big-Ticket Items?
Savvy shoppers are always on the lookout for a great deal, and to help you out, we've put together guides on the best times to buy big-ticket items.