10 Awesome Terminator Collectibles (For the T-800 Who Has Everything)

Terminator Genisys is almost here! The new movie promises to bring us back to the franchise's glory days, which has signaled tons of nostalgia for both 1984's The Terminator and 1991's Terminator 2: Judgment Day.

Both were fantastic films, and both inspired more memorabilia than we could ever hope to name, including action figures, posters, and some more "interesting" things.

DealNews scoured eBay to find ten of the weirdest (and coolest) Terminator collectibles currently on the market, and we think you'll agree that it'd take an especially devoted T-800 fan to pony up for any of these babies. 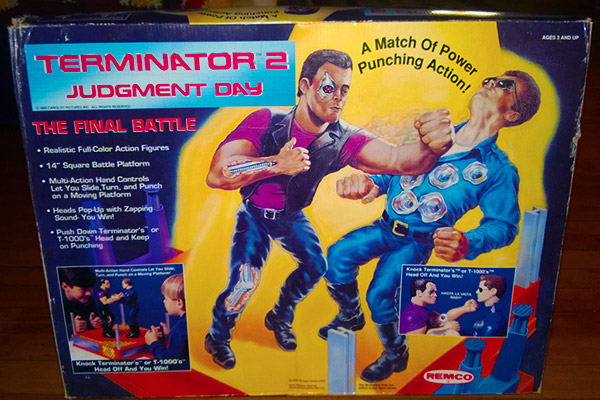 Remember Rock 'Em, Sock 'Em Robots, the game where two players used boxing robots as their avatars? Well, here's the Terminator version. Can Arnold connect with his deadly right hook, or will the machines win the future with one good uppercut?

(If you've never seen Terminator 2, we can confirm that it actually doesn't end with two Terminators settling their differences in a bright red boxing ring. Oh, what could've been.) 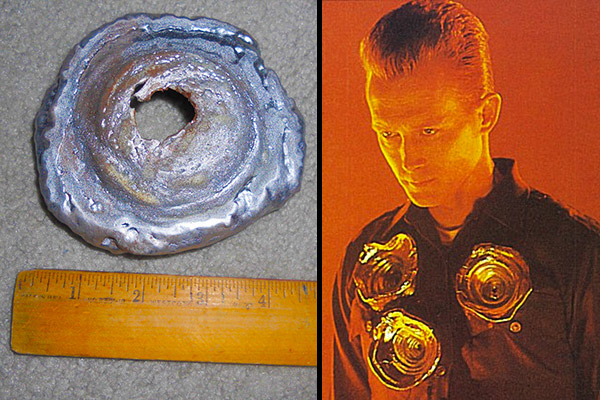 Allegedly, this is a screen-used prop from Terminator 2. You may recall that the villainous T-1000 was made of liquid metal, which could be shaped into any form. The T-1000 often used it to fashion clever human disguises, but a well-aimed shotgun blast would betray its scary robot origins.

A hundred bucks is a stiff price for a little piece of spray-painted foam, but for the Terminator fan who has everything, this is one heck of a birthday present. 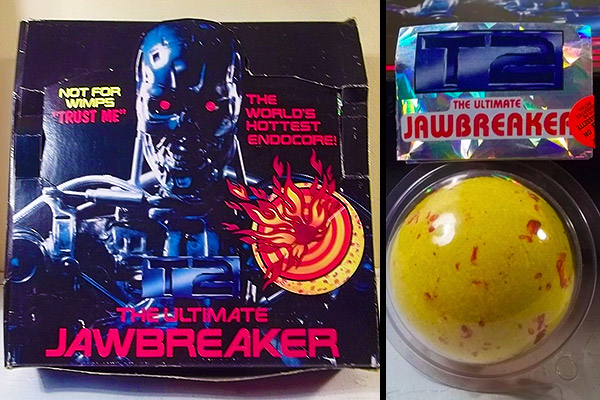 The asking price might seem absurd, but where else are you going to find a display box filled with giant Terminator jawbreakers from 1992?

Nearly the size of billiard balls, these candies had a sugary yellow shell and a hot red "endocore." (We think that means that the centers had a cinnamon flavor. You'll have to pardon us for not investing 200 bucks in expired candy to know for sure.) 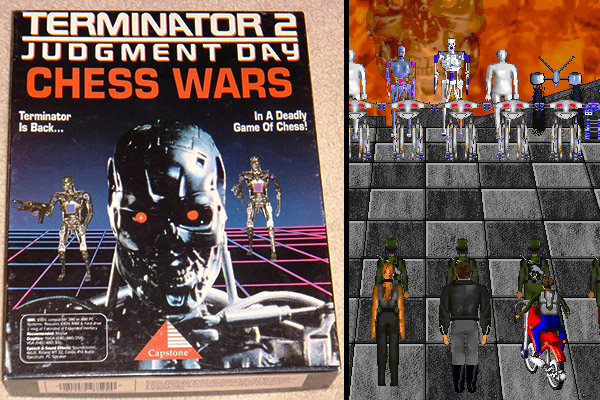 Of the many Terminator-themed video games, this one simply must be the weirdest. From 1993, the Chess Wars computer game replaced rooks and knights with the likes of Arnold Schwarzenegger and Linda Hamilton.

According to Wikipedia, each player was ranked in accordance to the official United States Chess Federation scale. We can't help but wonder if people who bought a chess game with two John Connors instead of bishops really cared about that. 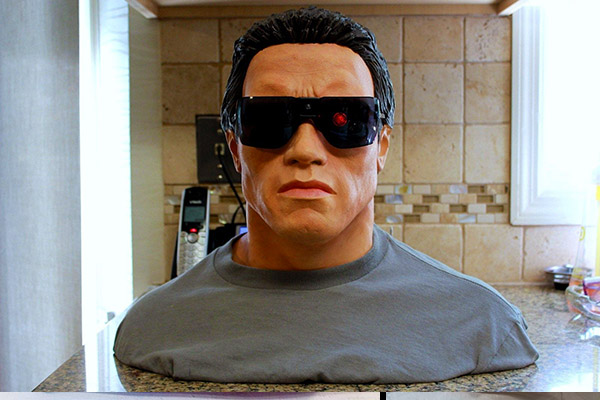 A life-sized bust of Arnold Schwarzenegger as a battle-damaged T-800, this one comes with removable sunglasses and a battery-operated light-up eye.

We're not ashamed to admit that we want this. It's not the $400 asking price that stops us, but rather the maddening thought of finding the perfect spot for a Arnold Schwarzenegger torso replica. Is this why a lot of newer houses have great rooms? 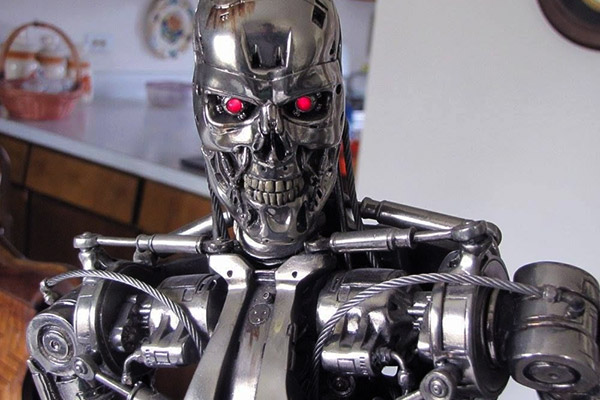 If you're looking for super expensive Terminator statues, eBay has you covered. This limited edition "Cinemaquette" is one of our favorites, mostly because none of the other Terminator statues stand over a pile of human skulls.

It's one-third the size of a "real" T-800, and without knowing exactly how many inches that amounts to, it still sounds pretty big. Only 1000 of these were made, and they regularly sell for thousands of dollars. We're jealous of anyone who owns one. (It's natural to be jealous of people who can afford to spend $4000 on movie memorabilia.) 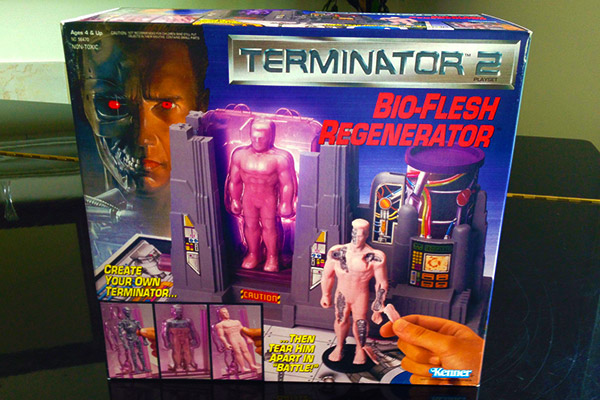 The Terminator franchise came with lots of toys, but none were stranger than the Bio-Flesh Regenerator, a bizarre cross between an action figure and a Play-Doh set.

Kids could add rubbery flesh over a Terminator "endoskeleton," and then howl with glee while tearing the skin off. This was the rare toy that let you give life and take it back! Considering that, we can't find fault with the high price. 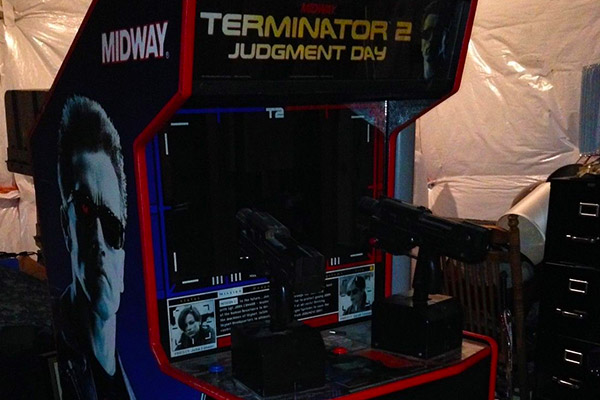 If you spent enough time in arcades during the early '90s, you should remember what a hot ticket this was. The Terminator 2 arcade game was a two-player shooter where everyone grabbed guns to mow down awful robots. With its impressive sights and sounds, it was 1991's best way to blow a roll of quarters.

Even if you're okay with paying $1200 for this, there's still the small matter of needing to drive to Virginia to pick it up. Then again, the best road trips happen for the most ridiculous reasons. 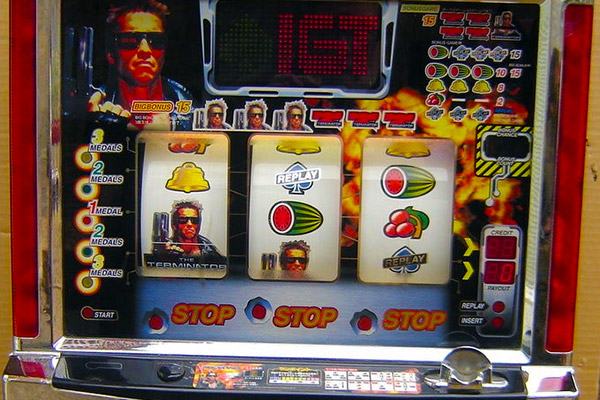 Yes, this really exists. A Terminator slot machine, with all the bells and whistles! Made in 2000, this was once an actual casino slot. (It's since been refurbished — as by law — to accept game tokens rather than quarters.)

If you're thinking about buying this, prepare to do some research: Even slot machines modified to disallow quarters are still illegal in some areas! 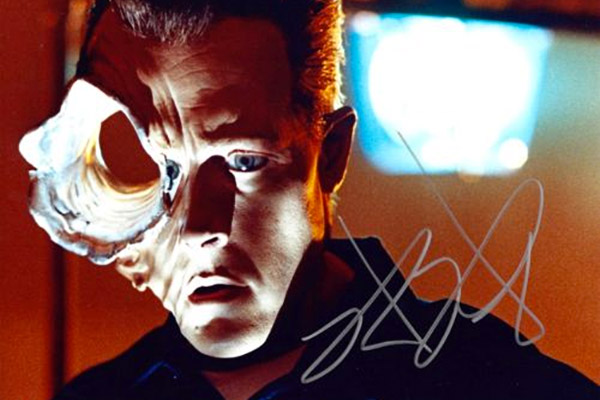 Terminator 2 made Robert Patrick's career, and we're sure he appreciates that. But we do have to wonder if he ever gets tired of signing glossy photos of his blown-apart face.

The autograph comes with a certificate of authenticity... which seems rather redundant as we can't imagine T-1000 autographs being a hot enough market to merit forgery. If crime is someone's bread and butter, isn't there a better way?

What made you a Terminator fan? The first movie? The sequel? Or was it Kenner's Bio-Flesh Regenerator? Talk about all things Terminator, in the comments!

Sounds like a great item. If I were you I'd list on eBay with a high Buy It Now price, but also accept Best Offers. Maybe something like $200 or $250 for the Buy It Now, though I'd probably accept an offer in the $150 range.

It really depends on the size and "coolness" of the light.

Also make sure you charge a pretty substantial amount for shipping, because an item like that will need to be packed extremely well, and I suspect is on the heavier side to boot.

Corrietwinb
Wondering if anyone can help?... My mom worked at a movie store in the late '70s- early '80s and she was there for the release of the first Terminator movie! Upon the release of the movie, the store was given advertising posters, and various ad merchandise. One item that caught my mother's interest was a light up Terminator 1 sign. When she left the movie store business, they gifted it to her in appreciation for her years of "rewinding tapes".I have now become the proud owner of this sign which still works perfectly. I'm afraid I don't share my mother's love of all things Terminator, and I felt it might be time to let it go to someone who does. So, my question to anyone listening out there... How would I go about finding a fair price for this item,as I can't seem to find one on any other site I've looked at? Any help would be greatly appreciated!! PS... So sorry my post is so long lol!
March 2, 2017

HowardaC
Well some of those asking prices are ridiculously inflated. A T2 arcade machine, for example, is 3-400 bucks and if you pay more than that you got ripped off. Japanese slot machines are around 200 bucks. As a matter of fact, there is one on eBay for 300 right now. I've seen the bio-regeneration playset for as little as 30 bucks.

These are the "I'm too lazy to get off my butt so I'll just use eBay" prices. ;)

Jeff Somogyi (DealNews)
"I know, now, why you cry... because memorabilia prices are so high."
*lowered into molton metal*
June 30, 2015

Every day through the 20h at 1 am ET, Woot will discount one item on the homepage of its mobile app to $1. Buy Now at Woot! An Amazon Company