Staples Will Be Closed on Thanksgiving This Year

People will still be able to shop online though. Will other stores follow suit?
BY:
LOUIS RAMIREZ
DealNews Contributing Writer 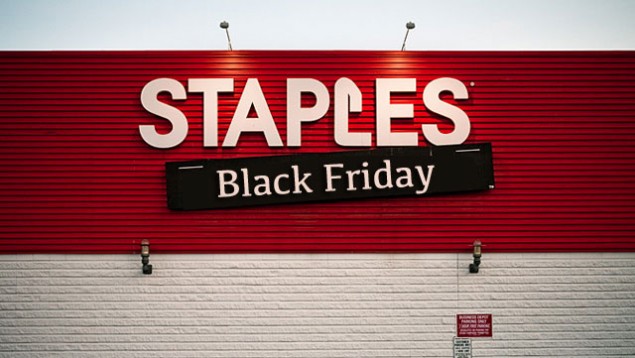 "We want our customers and associates to enjoy Thanksgiving their own way," said Demos Parneros, Staples' president of North American stores and online via a press release.

In-Store Sales Have Declined, But Online Shopping Is Still Available

For the past two years, Staples has been open on Thanksgiving Day, but a study by the National Retail Federation shows that online and in-store sales from Thanksgiving Day through the weekend dropped 11% last year, despite some retailers opening their stores earlier than ever. Approximately 133.7 million consumers shopped or planned to shop during last year's 4-day weekend, which was 5.2% fewer than the same period in 2013.

Does that ring a death bell for Black Friday? Not necessarily. Retailers have turned Black Friday into a month-long event, so if shoppers are spreading their purchases throughout the month, it's not too surprising that sales on Black Friday weekend would drop. And although Staples' physical stores will be closed, the retailer is still pointing consumers toward its website, which is open 24/7. The more interesting question is if other big retailers like Walmart, Target, or Best Buy will follow suit.

Readers, do you applaud Staples' recent announcement or do you prefer they remain open on Thanksgiving? Let us know in the comments below.

Tvs333
I love a deal - I love Black Friday. But I hate stores being open on Thanksgiving Day. Staples, you have a customer for life. #ilovestaples!
October 7, 2015

Another_User
I agree with many others: kudos for allowing employees to spend a MAJOR holiday the way they want. I too wish more would follow suit and exclude more holidays. Btw Staples was denied merging with Office Depot before (the 90's?) mostly because of OfficeMax, but now that those two are one I'd be surprised if the FTC allows a merger of Staples & OD (look at the failed merger of Comcast and TWC). If they do, then hooray as that means even more store employees will enjoy T-Day as they want instead of working early AM.
October 7, 2015

skittles
I commend them and wish all other stores would do the same. They could still do online sales and let the employees spend time with their family.
October 6, 2015

COMPUTIAC
All store's should be closed on major holiday's.

Stop being so greedy !

zeram1
Could it be because they won the "office supply wars" (since they acquired OD, which in turn, had already merged with OM), and thus have no more b&m competition?
October 6, 2015

luvsdeals
Way to go, Staples! I already liked them, but now I like them even more!!!
October 6, 2015

Cilvre
they earn my business for that
October 6, 2015

ChrisHall1956
Good for Staples! Here is to other companies following suit. Hopefully Easter will also be honored.
October 6, 2015

smusherface
I applaud their decision, especially since it could effect their bottom line, which for many retailers is the only thing that matters. That being said, I do suspect that an increase in online Black Friday shopping may have been a factor in that decision, though I don't have any statistics to support this supposition. There's a higher profit margin with online sales as well, since there are not as many overhead costs & less employees to pay. Whatever the reason, I'm very happy for the in-store employees & their families.
October 6, 2015

Apply coupon code "TKWINZB3" for a savings of $47. Buy Now at Amazon