Apple is expected to take 50% off the contract price of its iPhone 6 smartphone once its replacement is unveiled.
BY:
LOUIS RAMIREZ
DealNews Contributing Writer 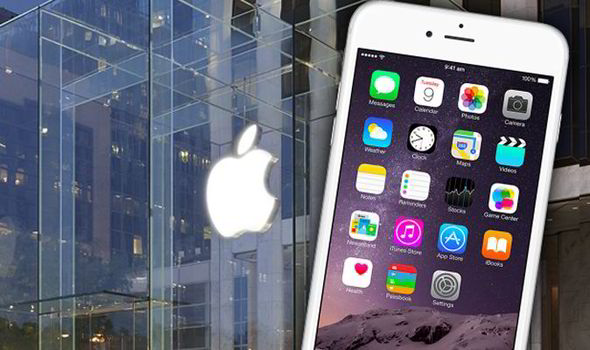 The buzz surrounding Apple's next-generation iPhone — likely to be called the iPhone 6s — is getting louder with each passing week. According to the latest iPhone rumors, the new smartphone could include Force Touch, a redesigned Apple A9 processor with 2GB of RAM, an improved 12MP camera sensor, and may come in a new "rose gold" color.

However, as excited as we are about the launch of a new iPhone, we're even more excited about the possibility of yet another iPhone price drop.

For the past few years, Apple has discounted the subsidized price of its previous-generation iPhones by 50% every time a new model is announced in September. That means consumers could see some excellent deals on the current iPhone 6 once its replacement, the iPhone 6s, is unveiled. What will that mean for prices?

Price Cuts Will Still Happen, Despite the Fading Subsidy Model

But first, a note about these prices. As we mentioned, we're referring to cuts to the upfront price that a shopper will pay for a subsidized phone while signing a two-year contract. A newly released base model iPhone typically sells for $199 on contract. Once it becomes a previous generation model, Apple typically drops the price, as noted below.

However, as you might have noticed, the subsidization model is slowly fading out. T-Mobile is gaining in popularity, and Verizon recently announced that it's dropping subsidies — which, in theory, means paying full price for your phone, and thus lower monthly payments. But one could argue that not all that much is changing, since users will still be able to buy a phone with the exact same down payment, and pay it off in installments.

Therefore, the usual "price cuts" for subsidized iPhones are likely to remain relevant for even contract-free carriers. And, for the time being, AT&T is still going strong with subsidies. However, if you are someone who wants to pay the full price of your phone upfront, rather than in monthly installments, check out our quick guide on unlocked iPhone deals.

The iPhone 6 Will Drop to $99 on Contract

Although the Apple Store isn't renowned for its deals, it is known for keeping around its older tech at cheaper price points. At last year's iPhone 6 keynote, for instance, it slashed the subsidized price of the iPhone 5s to $99 (50% off) and offered the iPhone 5c for free on contract (50% off).

This year we expect Apple to offer a similar pricing structure with its current iPhones, dropping the price of the iPhone 6 to just $99 and the iPhone 5s to $0, both with a contract renewal. For consumers on a non-subsidized plan, you can expect these prices as down payment, if you opt to pay off the rest on a monthly basis.

Retailers Could Offer Even Sharper Discounts

Naturally, retailers will undercut Apple at its own game and could offer the iPhone 6 for 50% less than Apple's new $99 price, for an effective price of $50. If you can wait, we recommend shopping for the best iPhone 6 deals after the iPhone 6s is officially announced.

However, keep in mind that it may take up to a month after the iPhone 6s' announcement for the iPhone 6 to get a noteworthy price cut. Last year, we didn't see deals on the older-generation iPhone 5s until the start of November.

So if you want an iPhone 6 in your hands sooner rather than later, the best time to buy an iPhone will be in August, or a month before the new model is announced. Last year, for instance, the iPhone 5s hit $58 in late August (days before the iPhone 6 debuted), and the year before that the iPhone 4s hit $49 in September (days after the launch of the iPhone 5).

iPhone 6 Plus Deals Will Be Harder to Find

Last September Apple announced both a new iPhone 6 and a larger iPhone 6 Plus for $299 on contract. Because the iPhone 6 Plus represents a new product category for Apple, there's no precedent we can look to in order to predict what kind of discount this phone may see in September. (We're not even sure if there will be an iPhone 6 Plus follow up, although most rumors seems to think so.)

However, since its debut, the iPhone 6 Plus hasn't seen many deals. In fact, the iPhone 6 Plus' price hasn't dropped below $279. So in terms of price cuts, it's hard to say what Apple will do with its iPhone 6 Plus. However, deals on this phone are so rare, consumers are better off waiting until the new batch of iPhones are announced before purchasing a new iPhone 6 Plus.

Slight Discounts on the iPhone 6s

Finally, if you prefer upgrading to Apple's latest and greatest, there's good news. Retailers like Walmart and Best Buy are typically the first to discount Apple's latest smartphones, usually by $10 to $20. By mid-to-late October, you could see deals that take $100 off the full price of a new iPhone.

Also remember to keep an eye out for trade-in deals. Last year, Verizon Wireless let its subscribers trade in an iPhone 4 or iPhone 4s (in good working condition) for a $200 Verizon Wireless Gift Card, which users could then use to purchase the just-released iPhone 6.

Deals will come in all shapes and sizes, so it's best to be vigilant and check our Editors' Choice page for the latest sales.

Lindsay Sakraida (DealNews)
@BlueOak There are people who are well aware of how the next generation affects pricing, and then there are those who either don't, or were unaware that it's "about that time again." We'd be doing a disservice to people who fall into the latter category by assuming everyone has the same level of knowledge when it comes to the pricing of a very very popular item.
August 28, 2015

xspeedy
The paltry savings of $100 for the 6 isn't worth it. Get the 6s the day it comes out - that is the best value. The longer you wait, the worse the value as the phone grows in obsolescence. Apple doesn't slowly drop prices as does Samsung or others.
August 21, 2015

The iPhone 5s is likely to get cheaper once the "6s" is announced, so if you can wait till after Apple's keynote (rumored to be Sept 9th), you might be able to save some extra bucks on an unlocked 5s.

lewales
What about the iPhone 5s? Any thoughts on discounts we might see on those? My iPhone 4s died and I'm getting by with a cheap flip phone until I find a (no-contract) deal I like.
August 20, 2015