Would you eat a "Thing Burger"? What about Transformers strawberry peanut butter M&Ms?
BY:
JEFF SOMOGYI
DealNews Contributing Writer

Restaurants and snack food companies have long been creating tie-in products to coincide with big movie releases, and it's especially frequent during the summer blockbuster months. However, the results are just as frequently ridiculous.

With a new Fantastic Four movie hitting theaters, we're once again being treated to a round of these culinary absurdities. And so, we felt it was time to take a look at the history of ridiculous movie tie-in foods. From creepy lollipops to the classic Ecto Cooler, here's our top 10!

The Thing Burger at Denny's

The item that inspired this list, was inspired by the need for Denny's to cash in on the upcoming Fantastic Four movie. There's nothing overtly over-the-top about it (what does it say about modern food culture that a burger topped with cheese, bacon, hash browns, and an egg isn't considered "too weird"?), but what struck us as odd is that, according to Marvel canon, the Thing is of the Jewish faith and this sandwich is definitely not Kosher. 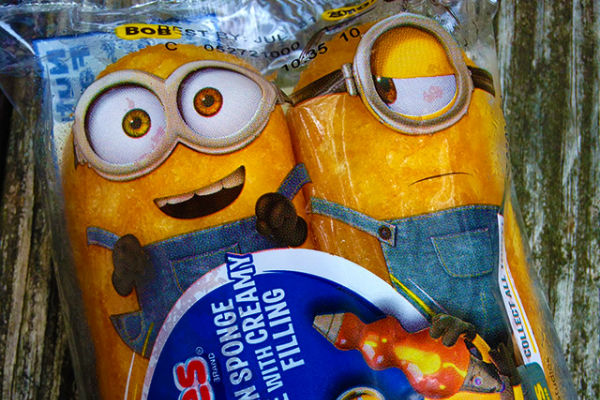 We'd be remiss if we didn't mention something Minions-related, because that movie is cross-promotion-ing all over the place this summer: Amazon boxes, Tic-Tacs, Happy Meals, and even — as we learned from this post by DinosaurDracula — Twinkies! Possibly the cleverest Twinkie promotion of all time, it's the well-designed wrapper that gives the "cakes" their minion-y appearance.

However, remove the wrapper and the tie-in goes away and all you're left with is a stupid, regular Twinkie and some garbage cellophane. Is this meant to teach children the value of leaving collectibles as mint-in-box? 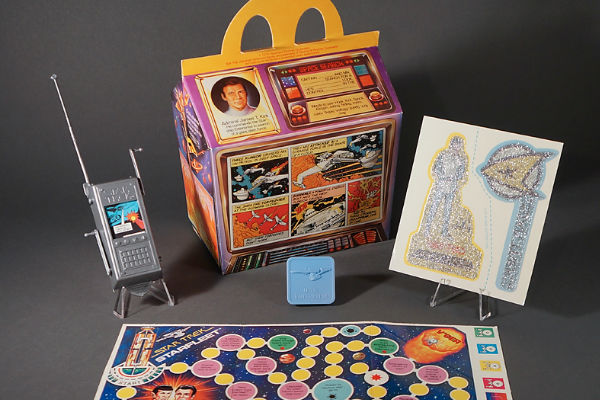 The first-ever movie/food tie-in promotion, we have this very Happy Meal to blame for everything that came after. In 1979, McDonald's executives thought kids would flock to see Star Trek: The Motion Picture, despite it being a rehash of the TV series' "Nomad" story — but I digress.

The toy assortment included a ring with a secret compartment, cardboard board game, glittery iron-on, bracelet, or communicator. Clearly the best of the bunch was that plastic communicator, as kids could pretend to talk to their favorite characters. "Scotty, beam me up some trans-fats!" 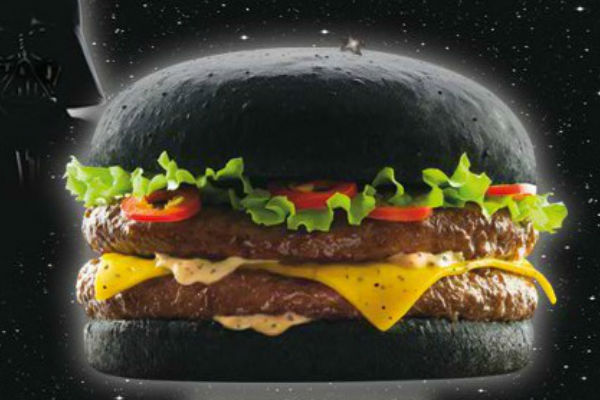 Note: The "Vador" spelling is not a typo. In Dutch "vader" means "father", so the spelling was probably changed to protect Anakin's identity as Luke's father? (Whoops, spoilers.) 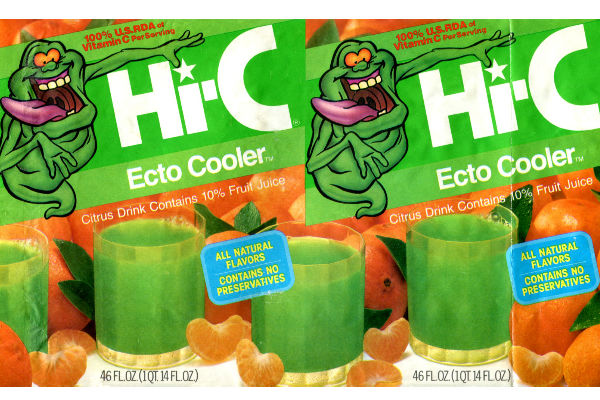 Few movie-related foods strike a chord like Ecto Cooler did. Technically a tie-in to "The Real Ghostbusters" cartoon, this neon-green, tangerine-tasting sugar water captured the imaginations of a generation of kids, allowing the "juice" to stay on shelves for more than a decade after the show was cancelled.

Many people who purport to now be grown ups spend time trying to recreate the recipe with other juices and dyes, or petitioning Coca-Cola (Hi-C's parent company) to bring it back (because the idea of drinking faux-ectoplasm isn't sickening, to people of a certain age). 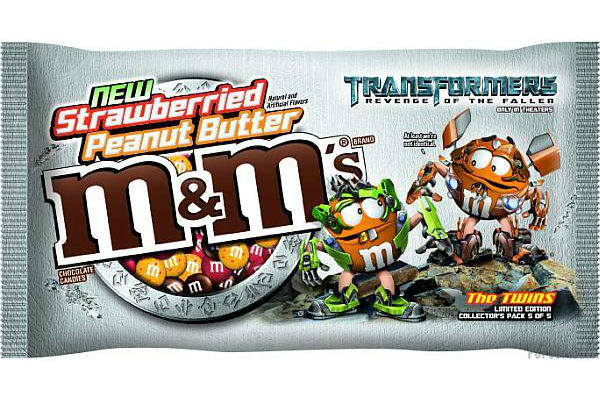 Can you see the synergy? That's right! They transformed good ole M&Ms into a candy abomination that you'd never want to eat. (They also make those *creak* *crunch* *crackle* "transforming" noises, when you chew them.) 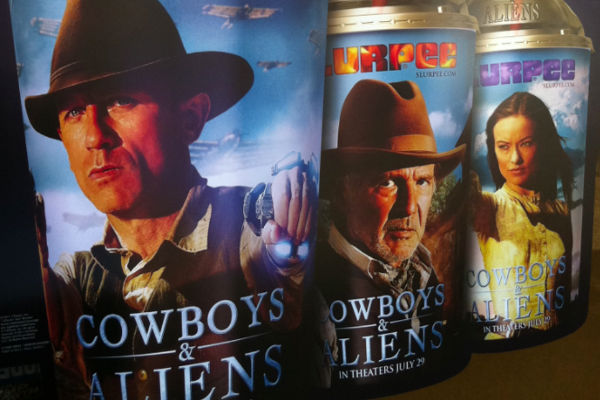 Cowboys and Aliens Slurpee at 7-Eleven

Very few movies are deemed worthy enough to get the Slurpee treatment from 7-Eleven. In fact, only 13 movies have ever been so blessed. In July of 2011, Cowboys & Aliens — with it's hot stars and goofy title — was poised to destroy theaters that summer. It didn't.

However, the Slurpee, called "Alienade" (a neon blue mix of strawberry, raspberry, and lemonade — the favorite flavors of aliens... or maybe cowboys) did destroy a few kids' teeth with cavities. We'd also like to point out that this stinkburger of a movie was so bad that 7-Eleven has not done a movie tie-in Slurpee since! Thanks, Cowboys & Aliens, for ruining it for everyone! 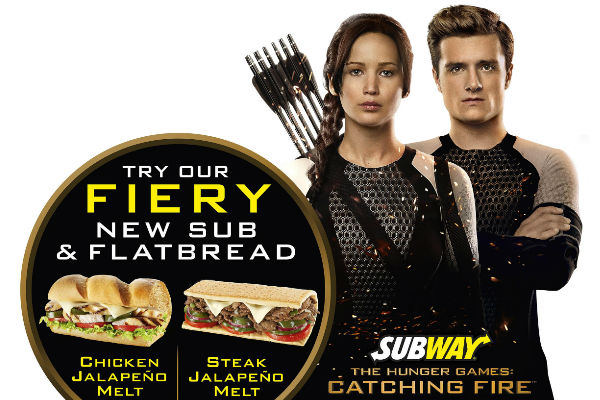 Could this possibly be the most misguided tie-in of all time? Did Subway execs just see "hunger" and think, "OUR SANDWICHES SOLVE HUNGER! LICENSE IT!!!"? Since they are "fiery" subs (using spicy ingredients), it's also likely the marketing person just heard "catching fire" and ran with it. No matter how they got to this place, it certainly wasn't by thinking about children killing each other for sport. 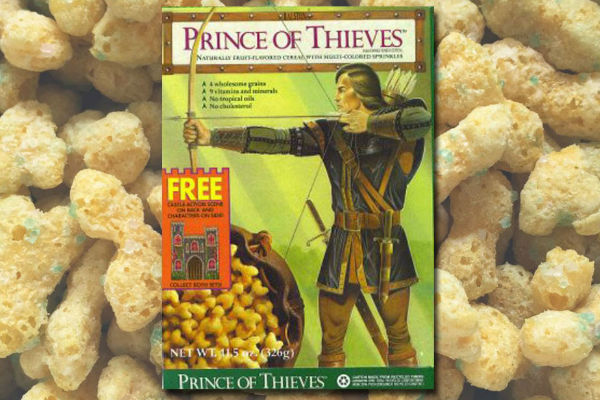 Here's one we had to check and double-check, then check again just to make sure it was really a movie tie-in, because the box gives you no indication that it has anything at all to do with the Kevin Costner film.

Yet, hitting shelves in 1991, alongside the release of the film, it's in-box promotional giveaway was a Robin Hood: Prince of Thieves movie poster, so it's either the most convenient coincidence since Robin meeting Azeem, or the weakest promotional tie-in of all time. 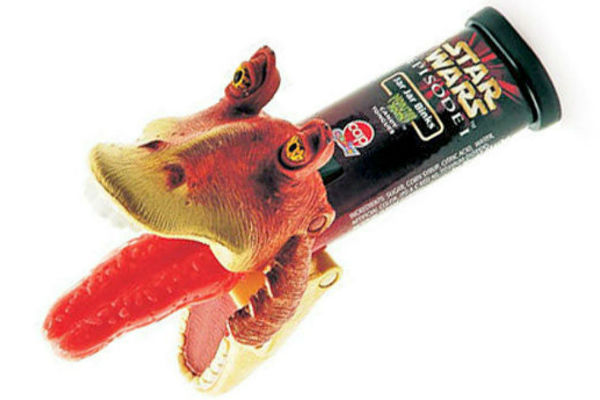 You might be shocked and awed at the amount of Minions merch that coats everything you see in a blanket of yellow and eyeballs, but, having lived through the 90s, let us tell you that this is nothing compared to the volume of merch generated by the Star Wars prequels.

Back then, Lucas wasn't concerned about what the product was, only that the producer paid for the license. Thus, the world was "blessed" with the above nightmare-maker. Tongue-shaped and hidden inside closable Jar Jar jaws, it's either the worst or best idea for a lollipop that anyone's ever had.

We think we've made a very compelling case against rampant movie/food tie-ins, but we only had room for 10. Tell us what films you've enjoyed, without your mouth, in the comments below!

regularg0nz0
Crystal Pepsi's making a comeback. Coke would be foolish not to pursue the licensing for Ecto Cooler. (pretty sure it only got pulled because contracts expired)
August 5, 2015

Zifna
The Ecto Cooler was magnificent, I can't believe it's gone.
August 3, 2015

Jeff Somogyi (DealNews)
@India-dealnews
Right? It would seem so surprising to me if they DIDN'T bring back Ecto Cooler. A new movie, rampant nostalgia over the old drink. It's the perfect storm!
August 3, 2015

India-dealnews
I can think of a whole slew of people who would love to see Hi-C
(Coke) bring back the Ecto Cooler. Who knows, maybe they will. I see great potential to bring back an oldie but a goodie for a tie-in with the upcoming new Ghostbusters movie.
August 3, 2015

VIEW ALL
Blog · Buying Guides · 4 hrs ago
What to Expect From Father's Day Sales in 2022
Father's Day is around the corner, and sales will be in full swing before you know it! Check out our guide on what to expect from Father's Day sales in 2022, including what will be discounted and the savings we should see.
Blog · Morning Jolt · 15 hrs ago
5 Deals You Need to Know Today: Save an Extra 50% off in Levi's Memorial Day Sale
It's an extra 50% off sale styles and 30% off everything else in Levi's Memorial Day hijinks. Check out this offer and more in our roundup of the five best deals we found over the last 24 hours.
Blog · Marketplace · 1 day ago
How to Create Coupons on Amazon
Amazon brought coupons to Seller Central in 2017, but these aren't your grandmother's coupons. Learn how to create coupons on Amazon, and what to know before you do.
Blog · Buying Guides · 2 days ago
6 Simple Ways to Renovate Your Kitchen Through Home Depot
If you're feeling like your house needs a refresh, consider these simple ways to do a Home Depot kitchen renovation. You can update your look and potentially increase your home's value!
Blog · Buying Guides · 5 days ago
What's the Best Time to Buy Big-Ticket Items?
Savvy shoppers are always on the lookout for a great deal, and to help you out, we've put together guides on the best times to buy big-ticket items.