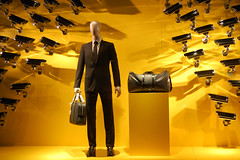 Like the proverbial guy who won't stop at a gas station to ask for directions — although with a GPS at hand it's rarely needed anymore — men shopping at stores don't want to stop and ask where anything is or be bothered much on their single-minded pursuit to buy a particular item.

So what's a retailer to do to attract men into their stores, entice them to buy more than they planned, and make it easy for them to spend their money overall?

We asked Philip Graves, an expert in consumer behavior and author of "Consumerology: The Market Myth, the Truth about Consumers and the Psychology of Shopping" to tell us the tricks of the trade. This is what he said:

Simplification
No one wants to be overwhelmed by too many choices in a store, but men in particular need simplicity. They are much more focused shoppers than women and don't process multiple choices, many categories or wide selections well, says Graves. They prefer single-purpose stores or clearly delineated departments rather than large, general-merchandise stores where you can get everything at once. And men get more fatigued by shopping for long periods of time, he adds, so they want to be in and out as quickly as possible.

"The Apple Store is a great male environment," Grave says, given that is has a lot of space between items and no clutter in a simplified layout.

The idea that less is more also works on websites. Graves has worked with websites that lowered the number of choices within a product category from 25 to five and saw a 25% increase in the number of customers who bought something.

Simplification can also lead to the perception of higher quality, he says, such as computer stores that have few computers on display so customers aren't overwhelmed by a big selection. Men give up more quickly than women when overwhelmed with choices, and are more fixated on accomplishing the goal than enjoying the shopping experience.

"We find it extremely frustrating when we can't meet that need directly," he says.

Much like simplification, stores that focus on what the male shopper is there for have the greatest success. For a physical store, that means good lines of sight and clearly categorized items. Men don't want to meander.

"Women are happier to go and explore and be delighted by discovery," Graves says.

A man's favorite store is a specialty store — suits, guitars, tech gadgets — whereas department stores have to organize their wares in a way that competes for notice. "You have to work much harder to put attention on an item so men will discover it," Graves says.

A good example of an online store that has focus is Amazon, he says. While it sells everything under the sun, its search engine makes it possible to isolate a category by showing only a few pages of results. The pages are formulaic, and one-click ordering allows shoppers to be in and out extremely quickly.

Genuine Expertise
A retailer can help a man overcome a fear of inadequacy of not being an expert in a subject if the salesperson's credentials are clear. Graves points to outdoor supplier REI as doing a great job with its clinics, and making specialists available who actually spend time in the great outdoors using REI products when they're not at work.

"A lot of retailers will say, 'We're the experts,' but in fact it's an easier claim to make than to actually fulfill," he says.

Providing genuine expertise is an opportunity for retailers to help men who don't feel as capable as they want to, such as DIY projects and a visit to a hardware store.

Stores such as Ace Hardware and Guitar Center also do it well by hiring employees who explain things in a way that the customer understands, and not that upstages the customer, Graves says.

Reassurance
The brands that work best with men are the ones that provide some sort of status symbol that takes away the worry of buying a good product.

"A brand is a great shortcut for a whole package of values," says Graves. "Men are very much driven by concerns about status," he said.

That's why so many men's brands turn to professional athletes as spokesmen, and why it is such a problem if that athlete ends up "disgracing" himself somehow.

Aaron Crowe is a freelance journalist in the San Francisco Bay Area. He has worked as a reporter and an editor for newspapers and websites. Follow him on Twitter — @AaronCrowe.

Does anybody edit this stuff? 'Removed' isn't the correct word for this sentence, and 'lowed' isn't a word at all. Perhaps this was supposed to say 'lowered'?