Wasabi Kit Kats, tuna salad Doritos, and cherry blossom Fraps are just a few of the twists on American snacks you can find in Japan.
BY:
ALISON BARRETTA
DealNews Contributing Writer

Wasabi Kit Kats? Tuna Mayonnaise Doritos? Cucumber Pepsi? No, these aren't the results of manatee idea balls (we think). These Franken-snacks actually exist (or have existed) for public consumption in Japan. Although other countries in Asia, like Taiwan, have their own interpretations of Western-style snack foods, the de facto world capital of odd flavors is considered to be the Land of the Rising Sun.

But what's the deal with Japan's fascination with novelty, especially when it comes to food? As TIME explains, the Japanese economy is fueled by innovation — something that's apparent in its contributions to technology. On the other hand, Japanese tastes are very fickle, which leads to companies testing the limits when it comes to introducing new and unusual treats to the market. Sometimes, these odd flavors stick around or become an annual tradition; often, they vanish, only to live on in the "craziest snack food" lists that populate the Internet. (Hey...just like this one!)

Below, we've rounded up an assortment of familiar Western-style foods with a Japanese twist. They'll either have you scratching your head in bemusement or wondering how you can procure these goodies for yourself. (Unfortunately, several of these items may have been discontinued.)

Kit Kats are a popular treat among the Japanese, mainly because the name of the snack translates to a variation of "good luck" in their native tongue. Unlike here in the States, the choice of Kit Kat flavors extends well beyond plain ol' chocolate. Behold some of Japan's more unorthodox Kit Kat offerings: 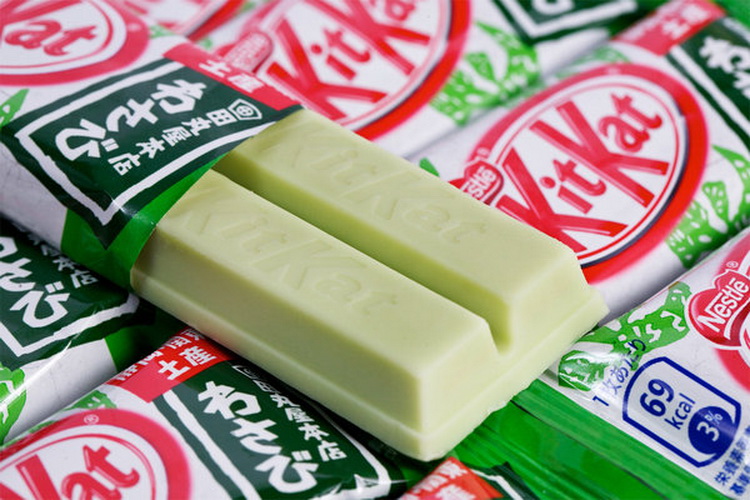 What is this? Wasabi Kit Kat

What's it taste like? This one I've personally tried. It's not spicy, but rather refreshing, almost minty. I brought several packs home from Japan for friends and family to try; most of them were pleasantly surprised by the flavor. 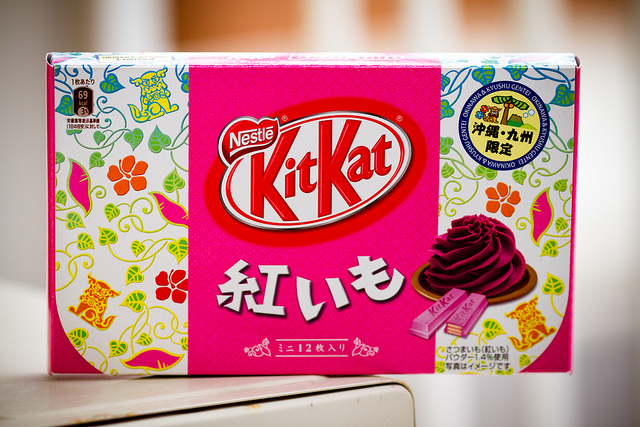 What is this? Beni-Imo Kit Kat

What is that in English? Purple Sweet Potato Kit Kat

What's it taste like? According to Mike Fahey of Kotaku, his tasting notes were as follows: "Too sweet. Lingers far too long. Must drink to cleanse palate. WILL NOT GO AWAY."

What is this? Petit Cheese Kit Kat

Is this still considered candy? I suppose so?!

What's it taste like? Per Oyatsu Break: "The cheese taste is a little milder than you're expecting, but the scent of it is still incredibly strong." Despite the smell, says the review, the primary flavor is that of a sweet white chocolate.

Another American-born snack food that the Japanese enjoy is Doritos. Much like Kit Kats, these corn chips have been flavored in ways that no one stateside could have ever imagined. Of particular interest is the Gourmet Doritos (?) line, which has produced these fine variations: 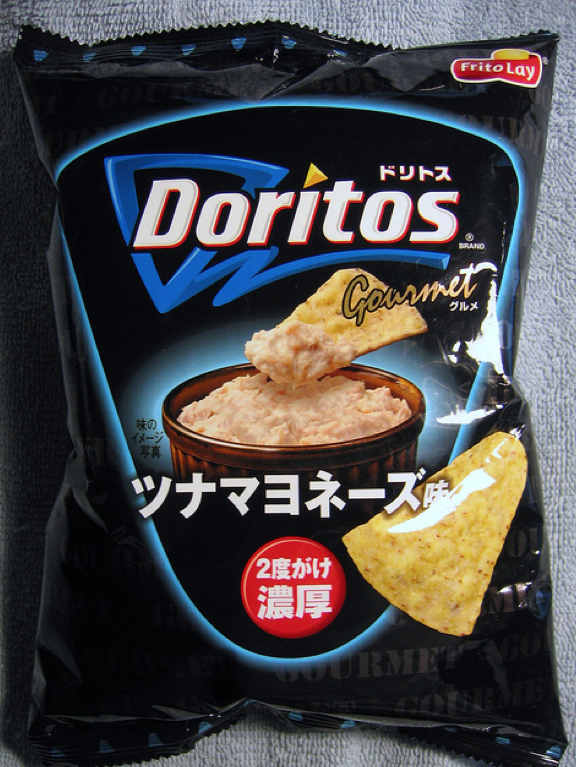 What is this? Tuna Mayonnaise Doritos

Did you PhotoShop this? Even if I had the skills, why?

What's it taste like? As intimidating as it may seem at first, unbrave girl says it's nothing out of the ordinary: "...aside from a slight mayonnaise-y aftertaste, they tasted pretty much like your ordinary corn chips. I couldn't even taste the tuna flavor at all."

What is this? Wasabi Mayonnaise Doritos

Mayonnaise again? Is mayo a thing in Japan? You could say that

What's it taste like? This video review from J-List shows that while they look like your ordinary corn chips, they also pack a bit of a spicy kick, especially if you eat more than one at a time. 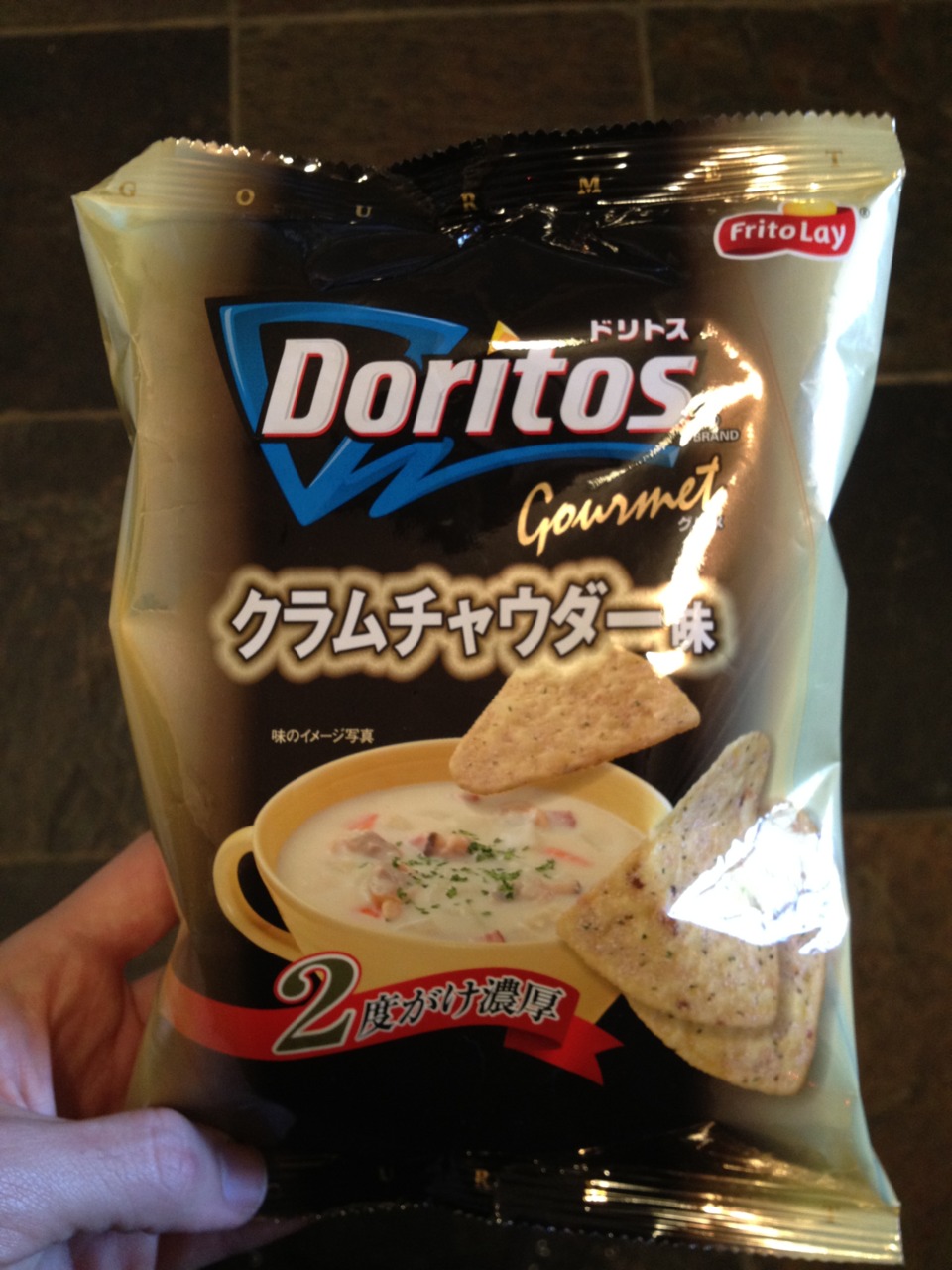 What is this? Clam Chowder Doritos

Does it have mayonnaise in it? As far as I am aware, no

What's it taste like? Despite a "fishfoody" smell upon opening the bag, Food Junk claims that the seafood taste of the chips is more subtle and "surprisingly authentic."

Who remembers the long-extinct Pepsi Kona? How about brief 90s sensation Crystal Pepsi? Those are a couple of the soft drink manufacturer's more ambitious endeavors here in America. Not to be outdone, Suntory (which distributes Pepsi in Japan) has dressed this soft drink up in a wide array of flavors, such as the following: 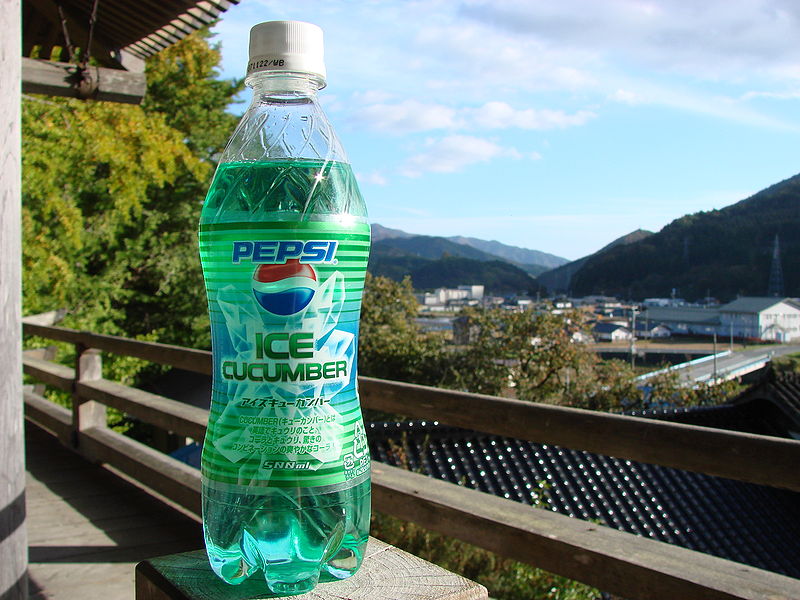 What is this? Ice Cucumber Pepsi

This really exists? Existed, as it was a limited edition flavor in 2007

What's it taste like? Kotaku's Brian Ashcraft has tried it and is not a fan: "This was, in my opinion, a truly horrid drink that didn't taste like cucumbers, but tasted like awful." This YouTube review seems to echo that sentiment. 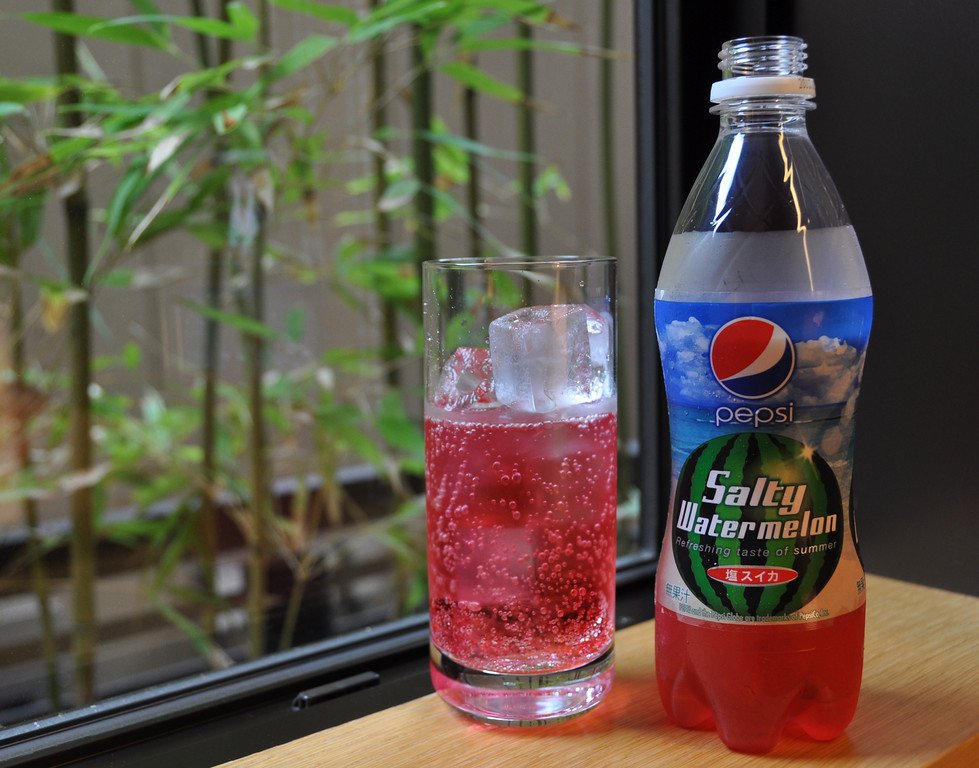 What is this? Salty Watermelon Pepsi

Salt on watermelon? Really? It's quite tasty, and not terribly uncommon

What's it taste like? "A refreshing taste of summer," boasts the label. Jonathan Gold of The Los Angeles Times describes it as a drink "with the fragrance of melted Jolly Ranchers but a muted, herbal taste that seemed to call out for alcohol." 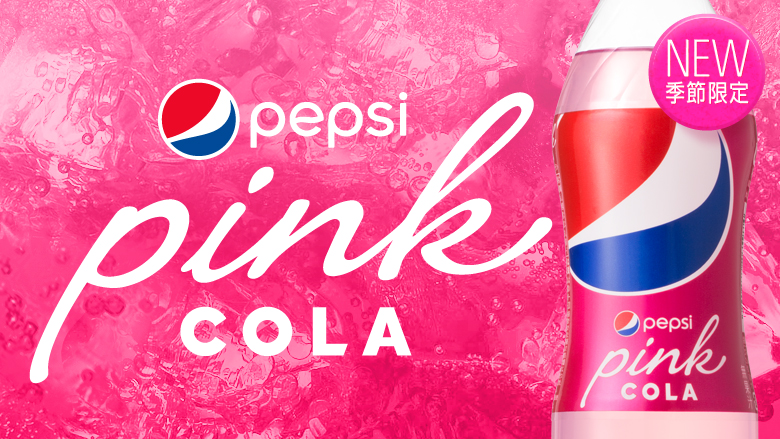 What is this? Pepsi Pink

Is "Pink" code for something? Strawberry Milk

What's it taste like? Well...like a carbonated take on strawberry milk?! In her video review, Mimei Land says it tastes more like strawberry candy.

In the States, Starbucks and other establishments celebrate the coming of autumn by pumpkin-izing everything (usually too soon). In Japan, spring is synonymous with sakura (cherry blossoms). It's a sure sign that pink blooms are looming when Sutaba locations across Japan start peddling cherry-flavored treats. Below are this year's Starbucks springtime specials: 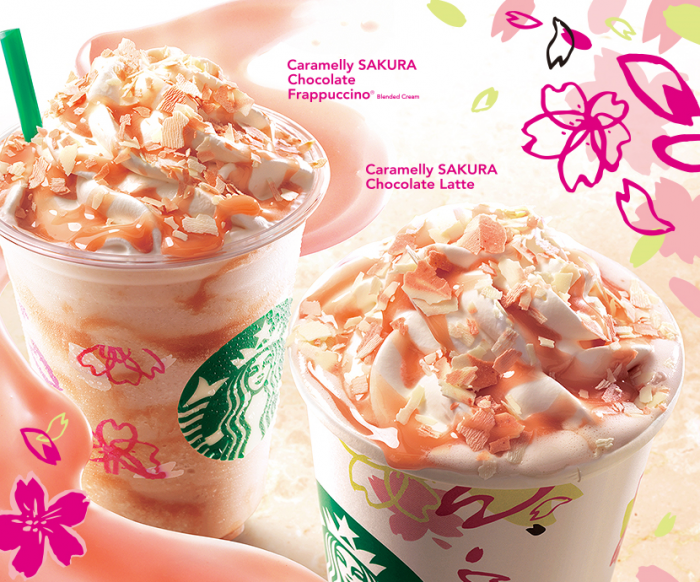 Do these have actual cherry blossoms in them? The caramel sauce is made from sakura petals

What do they taste like? RocketNews24 says both drinks are creamy and sweet. For a more potent cherry flavor, opt for the Frappuccino. 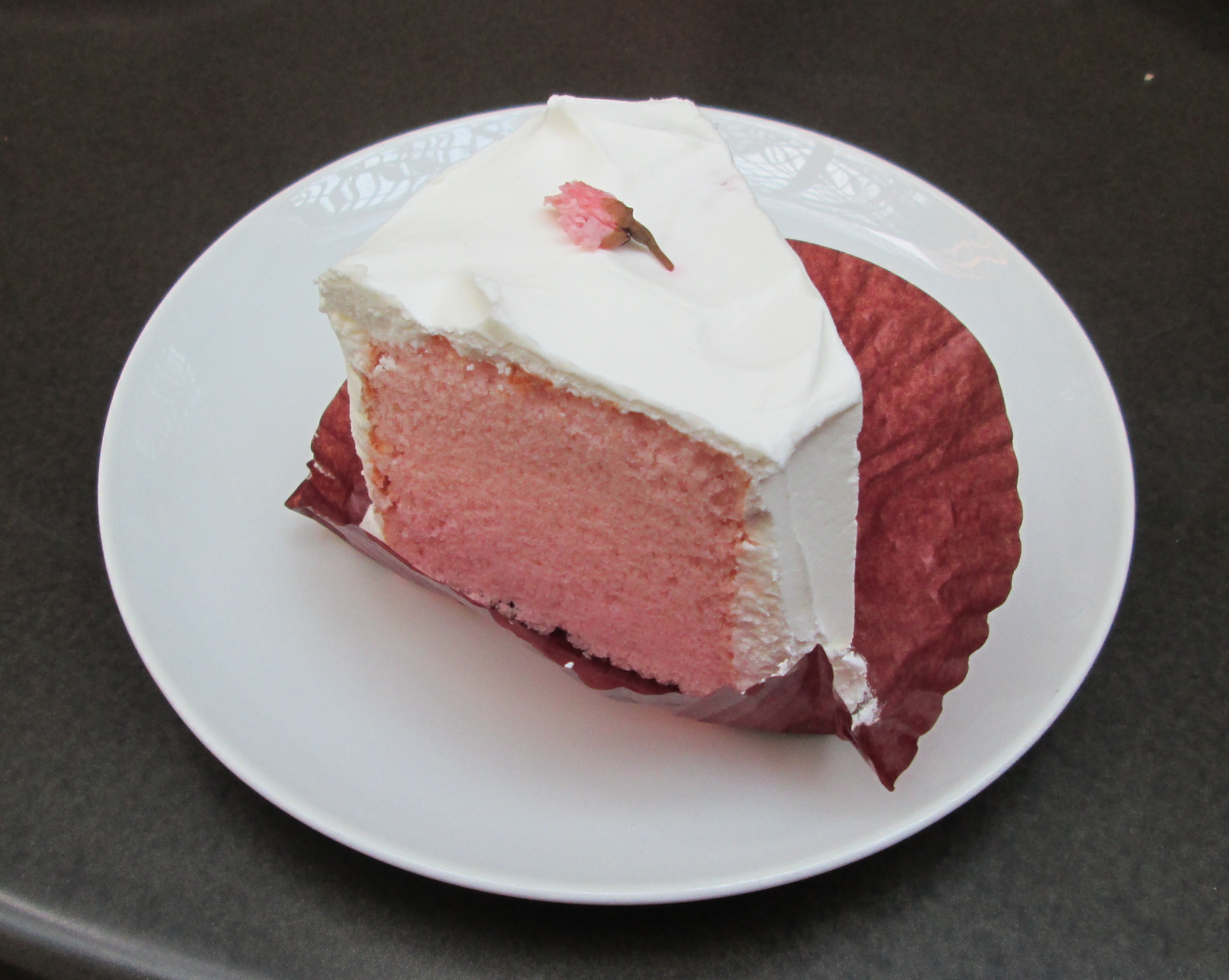 What is this? Sakura Chiffon Cake

Do these have actual cherry blossoms in them? The sponge and cream are made of petals and leaves; the bud on top is real

For those in America who are curious to try some of the more unusually-flavored Japanese snacks and soft drinks, there's good news: finding these items isn't terribly difficult, depending on what you'd like to buy.

Should you not live in the vicinity of an international food market, you can purchase the latest-and-greatest treats from Japan online through sites such as JBox and Amazon. If you like surprises, consider subscribing to Skoshbox, a monthly service that serves up boxes chock-full of sweet and savory snacks straight from Japan.

So, have we piqued your curiosity? Which of the above delicacies would you dare to try? Better yet, have you tried any them — or other fun-flavored foods that weren't present on this list? Share your tasty tales with us in the comments section. Don't be shy!

Allyson
Food for thought (yes, I went there): Depending on where you live, you might be able to find some of these items (or similar) in an Asian supermarket. I found Kit-Kat bars that were made with Matcha green tea powder in a Korean supermarket.
March 8, 2015

Alison Barretta (DealNews)
Trying to think of any sakura-flavored items I have tried in the past. Not many, unfortunately. I think the taste was more floral/fruity - not an in-your-face cherry.
March 5, 2015

Maybe I'll give these a try, since I can't get the Sakura Starbucks goodies shipped to me.

Deedas
I've tried several of the Dorito gourmet flavors and quite frankly they're forgettable. I have not tried the tuna nor the clam chowder. But if they're as bland as the other ones I say pass. They don't seem to add too much flavor to them. I feel like I'm eating plain corn chips that accidentally got mixed in with some flavor. I have tried the cucumber Pepsi but it was so long ago I don't even remember if I liked it. It most not have been too awesome since I can't remember how good it was.
March 4, 2015

Jeffrey Contray (DealNews)
I had snoek and atchar (essentially smoked fish paste and mango chutney) potato chips in South Africa that were quite good -- I definitely would love to try clam chowder or tuna-mayo Doritos.
March 4, 2015

Also, I'm with @JonFen, I think I could handle a Doritos taste test...

JonFen
Clam Chowder Doritos! 8'O
Get in my belly.

That's $30 off list and the best price we've seen. Buy Now at Amazon

There are over 200 units to save on, in a variety of conditions. Shop Now at eBay