With HBO on Board, 54% of Consumers Now Think Amazon Prime Is 'Worth It' 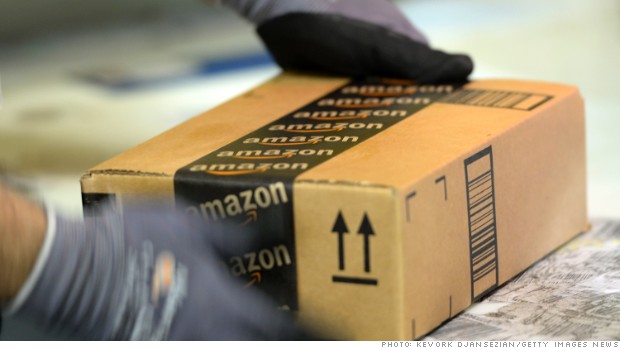 At this point, we've come to expect a note-worthy announcement or two from Amazon on a regular basis, but last week was a doozy. The Internet retailer declared that it has entered a multi-year contract with HBO to be the sole streaming provider of its content. That means that Prime members will be the only users who are able to stream HBO shows without subscribing to the channel itself.

This was obviously a huge blow to Netflix, the undisputed leader in the streaming media market. But it would seem that the positive effects extend Amazon's competitive edge against its content rival.

According to a DealNews survey, 54% of consumers who originally thought the new $99 subscription rate for Amazon Prime was too high now feel that the cost is justified, due to the addition of HBO content. They believe that the union has made it more attractive for them to renew their existing subscription or subscribe anew, despite the price hike. 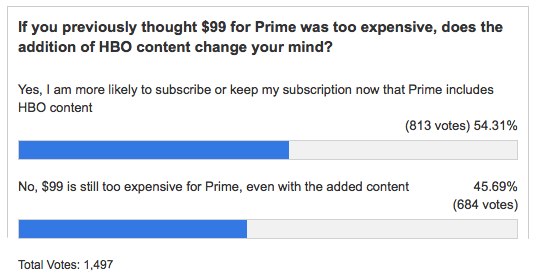 This isn't terribly surprising, as the most common complaint when the hike was originally announced was the desire for better value from the streaming library. In theory, if a consumer is already spending $7.99 a month for Netflix (which may increase by $1 or $2 soon), then he is forking out $96 a year for streaming alone; if Amazon can provide a comparable or superior streaming library, then $3 more for Prime — which also provides free shipping, in addition to a plethora of other perks — seems like a no-brainer.

And that's ultimately great news for Amazon, as its sweeping business seems to be distilled down to a single idea: do everything it can to entrench people in its ecosystem, to the extent that acting outside of it becomes tedious. Prime is one of the major tools to help orchestrate this goal, and Amazon's promotion of the service will likely only deepen. For example, rumor has it that the long-awaited Amazon smartphone will come with a "Prime Data" plan that allows users to stream its music, movies, and TV shows without dipping into their monthly data allotment from their wireless provider.

It's also important to remember that Amazon is slowly losing the battle over collecting state sales tax, which has had a negative impact on the volume of transactions in affected states. Therefore, entangling customers in its web of convenience will become utterly crucial towards maintaining commercial dominance. When getting what you need or want is a few easy clicks away, customers begin to care less about other options. As one shopper explained in a BBC program (about how half of online transactions in the UK take place through Amazon): "If I want to know something, I'll Google it. If I want to buy something, I'll Amazon it."

The more Amazon is able to enlist people in its Prime program, the more that mindset pervades.

jsmithrulez2
Still worth it. Amazon 2-day shipping is much better than waiting an entire week. More people stream then own DVRs these days. Naive children like mirrormirror need to educate themselves on digital marketing. Thank you Dealnews!
February 12, 2015

mirrormirror
still not worth it. Amazon offers enough free shipping if you are willing to wait a week, so Prime makes little sense with DVRs these days. If they or hulu offered streaming of all current TV shows as they air instead of the next day, it would be worth it to cut the cable cord. But streaming takes a lot of bandwidth & many providers are quick to throttle users that watch a lot of video so they will subscribe to their TV offerings. Sure its a conflict of interest, but the cable/telecom companies pretty much run the FCC which was supposed to regulate them. Want to know why we are still waiting for feature parity with broadcast for online streaming? Look at the money Telecoms & ISPs spend to fix the system so they can inflate prices & limit choice.
May 1, 2014

Romo0012
I like Prime as a member myself, but now most of their stuff isn't fulfilled by prime. I am already a HBO subscriber so maybe unsubscribing might save me a few dollars a month.
April 29, 2014

Mike_from_the_block
get it all free, i found an invite only torrent site called scene access and they have tv shows minutes after they are over and every movie i could ever see in my life. I dont have to go to movie theaters anymore. SAVE THE MONEY AND BOYCOTT THESE PAY SERVICES!!
April 29, 2014

theTorrey77
No Game of Thrones.

Anywho….I use Prime for the free shipping, and I'm considering not renewing as I don't shop that much with Amazon.

larknoelle
As I commented in the poll itself, I wonder if people would still say 'yes' if it was made clear as it wasn't in the dealnews poll, that seasons won't air for 3 years. This isn't like having HBO Go free with your Amazon Prime subscription.
April 28, 2014