The Color Mixture in an M&Ms Bag Is a Precise Science, and Other Candy Facts

Here at dealnews, we of course like good prices, but we also love everyday data that sheds light on what Americans like to indulge in. As we come closer to the spookiest of holidays, we turned to our friends at Bundle for a look at the real sweetness behind Halloween candy.

How sweet? We're talkin' 600 million tons of candy purchased every Halloween, which accounts for a $1.9 billion haul, or $44 per household! So, double bag those pillowcases for the customary Halloween candy binge and take a moment to review the facts and figures behind the hidden world of candy. (We won't tell your dentist if you don't.)

There's a Lot of Candy Corn Out There 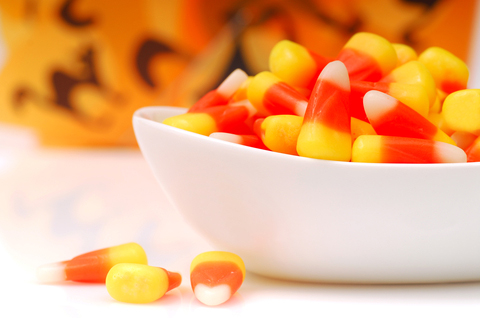 Candy corn is, by volume, America's most popular candy (followed by Snickers, Reese's Peanut Butter Cups, Kit Kats, and M&Ms, in that order). Halloween accounts for 75% of all candy corn's annual production. About 35 million pounds of the stuff — or roughly nine billion pieces — are produced each year, which translates to about 27 individual corns for each and every American. In fact, if you laid each little candy out end-to-end, they would circle the Moon four times. 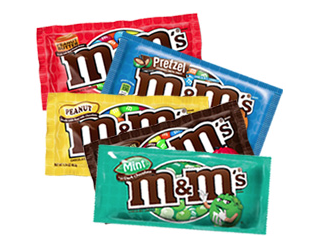 While some folks claim to be able to taste the difference between red and blue M&Ms, the good people at M&Ms attempt to give the rest of us ample opportunity to just choose our favorites to eat first from the bag. But, there is a science behind the color mix in your favorite bag of M&Ms, and its based on "consumer preference tests." On average, the mix of each variety of M&Ms follows these color percentage breakdown:

Mr. Goodbar Is No Good for You

Of all the common individual candies handed out at Halloween, Mr. Goodbar is the least healthy of the chocolate bunch. A 49-gram Mr. Goodbar has 250 calories, 17 grams of fat, and 23 grams of sugar. According to myhealthnewsdaily.com, who rated the sweets, the next least-healthy candies are Nutrageous, Snickers, Baby Ruth, and Mounds. Meanwhile, the (relatively) "healthiest" candies were Jolly Ranchers (70 calories, no fat, 11 grams of sugar), followed by Blow Pops; Gobstoppers; Pixy Stix; and our old standby, candy corn.

Chocolate is, by far, America's preferred Halloween candy. Of the nearly $2 billion that Americans spend on Halloween candy each year, about $1.2 billion goes to the cocoa kind; only $680 million is spent on sugary candy. The average American consumes 24 pounds of chocolate every year — that amounts to almost 284 Hershey bars per person.

According to a survey from the National Confectioners Association, 90% of parents admit to sneaking candy from their kids' trick-or-treat bags. The favorite treats to be stolen from their own children are snack-sized chocolate bars (70%), candy-coated chocolate pieces (40%), caramels (37%), and gum (26%). The candy least worthy of violating parent-child trust: licorice (18%).

We May Be Seeing the End of Super-Sized Candy

As America turns its attention to the obesity epidemic, many candy manufacturers are sensing that they may be seen as the next "Big Tobacco." Before proactive government regulations are placed on top of their business, the industry has begun enacting certain self-regulations. Mars, Inc. (the company that manufactures M&Ms, Twix, Milky Way, and 3 Musketeers, among others) has pledged to only sell products that are less than 250 calories. For the record, the average Snickers bar has 280 calories and the company has not explicitly stated how it will reach all its caloric goals.

OK! Enough of all this talking about candy, and let's start doing some eating! Check out our food and drink deals to see if any candy offers pop up, or set up an email alert to be notified via your inbox. You can also check out our Halloween sales page for general seasonal merriment.

Evan Dashevsky is a dealnews contributing writer. He was a contributor to PCMag and ExtremeTech and is currently a contributing editor for DVICE. Follow his cough-sized thoughts @haldash.

wifiwardrive
600 million tons seems like like lot.  Thats almost 4000 pounds for every man, woman and child in the US.  On the flip side, $44 per household seems pretty cheap for something like 10,000 pounds of candy.
October 23, 2012

That's $30 off list and the best price we've seen. Buy Now at Amazon

There are over 200 units to save on, in a variety of conditions. Shop Now at eBay