Doughnut or Donut? Who Cares! They're Free! 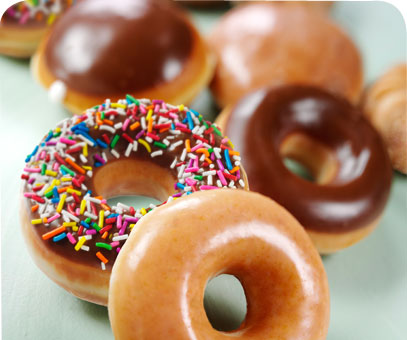 We've been eagerly waiting for this day to come, and finally, it's here: National Doughnut Day! That means free doughnuts for everyone!

If you assumed, though, that this is a new holiday meant to capitalize on the recent explosion of pastry-obsession in this country, let us disabuse you of that fact. The truth is, it's been celebrated since 1938! Originally a fundraiser for the Salvation Army, it has since evolved into a simpler celebration of the torus-shaped sweets, with stores giving away free pastries on the first Friday of June.

Before we get to what doughy deals you can expect to see this Friday, let's address the elephant in the room: the spelling issue. Several of you probably have a knee-jerk, teeth-grinding reaction whenever anyone writes "donut" instead of the "correct" spelling. "The Internet is killing our language!" you scream, while tearing out your hair. Others couldn't care less.

However, according to Grammarist, the "slob spelling" has been around since the 1800s, even though it only became popular vernacular after the Dunkin' Donuts chain went national. A GoogleFight of the two words shows that "donut" is used nearly five times as often online. And so the language evolves!

Shush Up and Give Me Doughnuts!

The deals this year range from "free with purchase" to just plain "free!" One might be strictly better than the other, but it's not like you were not going to buy something else (i.e. a coffee drink) to go with the doughnut, right? So it's moot. Deliciously, deliciously moot.

After jumping through some hoops, Tim Hortons will bestow upon the dedicated a free doughnut with any purchase. However, you will have to go to its Facebook page and hand over a "Like" to receive a printable coupon to bring with you. If you factor in the price of another purchase and the cost of your printer ink, piece of printer paper, and the energy your computer consumed so that you can visit Facebook, this might not be as lucrative as you first thought.

Similarly-hurdled is Dunkin' Donuts' offer which, though it requires no Facebook-ery, only offers up a free doughnut with any beverage purchase (instead of any purchase). So instead of buying one doughnut to get one free, you're in for at least the price of a cup of coffee, which can range from $2 to $20+ (if you buy their "Box o' Joe" — equivalent to 10 cups of coffee — which is certainly not economical if you just want the free doughnut).

The best offer by far comes from Krispy Kreme: these guys are going to hand out a single doughnut to everyone who walks though the door! For free! No hoops, no extra purchase, just pure, unadulterated, free fried dough. This is what America is all about. Visit multiple locations to get more... but just know that even if you walk to each store, you're probably not burning off all the calories. (Likewise, as our Facebook fan Amber Beatty pointed out, Winn-Dixie also offers a completely free doughnut, although it'll be in the form of a "Jumbo Donut Hole" as opposed to the traditional ring.)

Of course, all of these deals are only at "participating" stores, so don't blame us if you show up to your local doughnut office and are turned away with a "Not here, buddy!" and a sneer. Then everyone in the store starts laughing and calling you a "cheapskate" until you are guilted into buying two dozen doughnuts which you will then eat while crying on your walk home. It could happen.

A Final Note on Spelling, Because It Bothers Us

Is there some unspoken rule that national chains have to have a misspelling in their name? Surely Tim owns the shop, so it should be Tim Horton's? As stated above, we're coming to terms with "donut," but the apostrophe-shortening of "dunking" is dubious. And we just throw our hands up in defeat at the phonetic nightmare that is Krispy Kreme. We eventually then lower those hands though and pick up another donut because when all is said and done, they're delicious. Happy National Doughnut Day!

And if you get your fill of "normal" doughnuts, consider perhaps the wonder that is the bacon doughnut sandwich.

Jeff Somogyi is the dealnews Media Editor. He thinks that the only thing better than a doughnut is two doughnuts. See more of his hole-y thoughts on Google+ or his new Twitter account.

GeorgeHielscher
I am wholly (hole-y?) in favor of the modern spelling of donut. A word as wonderful as donut should not contain a silent "ugh". The silent "ugh" is often, maybe appropriately, used in the names of places, such as "Hillsborough", but simply does not fit in a delectable breakfast staple. Please, DO-NUT use the UGH.
June 2, 2017