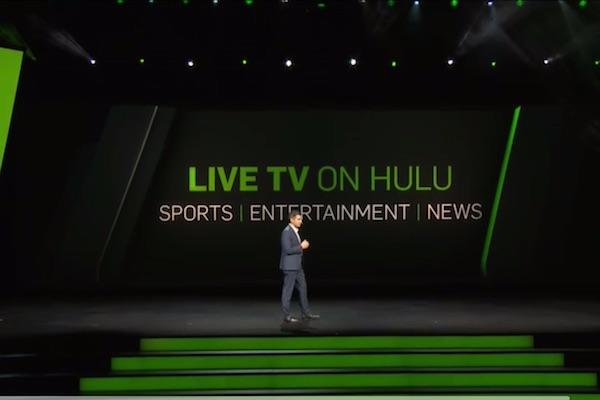 Hulu, long known as the destination for TV episodes a day or two after they air, wants to get into live broadcasting. They announced an online streaming package last week that would include broadcast and cable channels. If successful, this could be a game changer, as cable-free households could have a new, perhaps better option for live TV.

Most Networks, Some Cable, and Even DVR for $40 a Month

Customers would be able to stream entire channels in the package for a monthly fee. Partners include 21st Century Fox, Walt Disney Company, and Comcast's NBCUniversal, so their channels are likely to be part of the deal. Hulu wants to introduce the package early next year, and while there aren't exact pricing details yet (that's something still being discussed), executives do expect the new service package to cost about $40 per month.

SEE ALSO: How to Cut the Cable Cord: 6 Steps to Stream TV and Save Money

There are rumors the new service could also include a "cloud-based digital video recorder". This would be a huge selling point for users who miss having such an option via cable or satellite subscriptions.

The new service reportedly won't resemble a regular cable channel. Instead, it's going to offer a more intuitive, personalized experience. The bad news (or good news, depending on how you feel about commercials), is that it would also allow for more targeted ads. You wouldn't be able to completely do away with commercials, but at least the ones you see might be more relevant.

Rivalries Could Lead to Similar Services

This is a bold move from Hulu, but there's a chance that traditional cable and satellite providers might see this move as a declaration of war. Additionally, any networks left out of the new package could band together and form a rival service.

Disney and Fox could end up competing with their own biggest customers.

Traditional cable companies like Comcast and Time Warner Cable are customers of Disney, Fox, and other TV networks. If Hulu is able to license live content from these networks as part of its digital service, Disney and Fox could end up competing with their own biggest customers.

Get Live TV Now With These Other Options

Though Hulu is the biggest name to throw its hat in the ring for live TV streaming, it's not the only choice. The cheapest option is probably investing in a digital antenna. It'll only set you back the cost of the antenna, which can be as low as $10. Once you hook it up, you'll be able to receive digital broadcasts of your local affiliates, plus other channels like MeTV, depending on where you live.

If you want more than local channels and old movies, you can also invest in Sling TV or PlayStation Vue. Subscriptions start at $20 per month and $30 per month, respectively; you can add even more channels to both services for additional monthly fees.

Readers, would you try a streaming package like this from Hulu? If not, why not? Sound off below!

DCleveland
I added a channel master dvr to our antenna. It not only streams but records live TV, rewind, fast forward, etc. A few apps are built in for streaming like sling. Should have been included in this review.
May 15, 2016

AllSeasonRadial
Still a no-go for us, since our data is capped at 300 GB which we use up easily even without such a streaming service since we completely cut the cord in 2013.
May 15, 2016

mike01001
I have been using Sony Vue for a week now and think it is an excellent alternative to a cable/satellite service. No paying for a hundred music channels etc. As for internet, yes you need it but who doesn't already have it. You do need a minimum of 10 mb download speeds. All their content is in 720 with a limited function cloud DVR.. I strongly suggest looking at this service. I probably come off as a paid schill.
May 12, 2016

jeffreolson
For me, it's $60 for high speed internet. Adding $40 brings me back to $100 a month and inching toward what I paid before cutting cable. Doesn't make sense for cable cutters
May 12, 2016

Lindsay Sakraida (DealNews)
@LonnieMcClure They do, but you have to pay more for that. I think it's the notion of paying anything at all and still having to endure commercials. Most digital products are based on free with ads, or paid with no ads. Hulu is the only service I can think of that is still paid with ads. I understand why they are, but I think it annoys a lot of people into not subscribing at all, on principle.
May 11, 2016

LonnieMcClure
@HeyTiger: Did you forget Hulu has a commercial-free subscription tier now?
May 10, 2016

HeyTiger
I will never understand hulu subscribers. You pay for the service, but they still force you to endure advertising. Pass.
May 10, 2016