On the Apple Store's 10th Anniversary, a Look Back and Forward 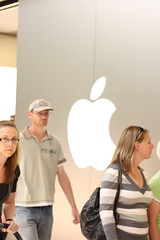 Apple products have certainly changed the way we live — ahem, the iPod and iPhone and iPad — but Apple has also fundamentally changed the way we shop. As Apple celebrates the 10th anniversary of its retail stores this weekend, we take a look back at the way it used to be, since we've been following deals on Macs for a very long time (dealnews just celebrated its 14th anniversary).

On May 19, 2001, Apple opened two stores: in Glendale, Calif. and McLean, Va. Both retail locations were light and airy and the stated goal was to increase sales of the brand's computers. At the time, Apple held just 5% of the market share on computers and the idea was to provide a place where consumers could see and interact with the products. So the company hired a former Target executive, Ron Johnson, now executive vice president of retail, and jumped into the retail arena.

Until there were Apple Stores, Apple products were sold mostly through mom and pop computer stores, which acted as authorized resellers. National chains at that time were largely PC-focused, with the exception of CompUSA. But even there, the Apple store-within-a-store was in the back corner and Apple specialists — "geniuses" as they're now called — were hard to come by in superstores that sold a lot of everything. It's that pairing of product and service that really made the Apple Store better than even the small shops that gave personal service.

Nonetheless, Apple stores were widely criticized at launch. The strategy to locate in posh urban areas with heavy foot traffic and high visibility flew in the face of what had worked in computer and consumer electronics retailing until then. The spaces the company picked were among the most expensive in commercial real estate; computers were cumbersome; and people needed to park or at the very least a place to load up their purchases. These were pricey playgrounds. How would Apple ever open 25 of them (their goal at the time), and make the stores profitable?

Apple is certainly having the last laugh.

Sales at Apple stores are now a little more than $4,000 per square foot, more than any other retailer, including Best Buy ($930) and Tiffany ($2,666). "Apple is extracting more money out of those retail operations than anyone else in the world," says Michael Rose, lead editor at The Unofficial Apple Weblog.

It might have been a much different story, however, if the iPod hadn't come along later that fall. Of course, those claiming Apple's retail strategy was doomed didn't know the iPod was coming in October, but Apple did.

"The iPod could have flopped, but it was a world-dominating success," says Rose. "Ten years later, Apple owns 70% of the market share on that kind of product." It's also managed to increase market share in the computer category to about 10% overall, and nearly twice that for notebook computers, according to Rose.

There are now 320 Apple Stores worldwide, many of them architecturally significant, like New York's gleaming glass cube and Chicago's lucite stairway and grass roof. All have the signature Genius Bar, an auditorium for educational events and classrooms to learn how to get more out of Apple products. And this weekend, to celebrate the anniversary, some kind of celebration is planned. The whole thing is shrouded in secrecy.

If the past is any indication, consider that for the 20th anniversary of the Macintosh computer in 1997, Apple released a collector's edition computer complete with a custom-made Bose sound system, internal TV tuner, 75 character keyboard, leather palm rests, a 12.1" screen and a whopping 2GB of memory, all for $7,499. "It's was a pretty big failure," says Jim Adams, senior editor at dealnews and dealmac. "They only made 12,000 of them and probably sold half of those. They won't do that again."

There's speculation about a new iPhone or maybe an Apple-branded TV. More likely it's something store related, like the rollout of an iPad based POS system to accept mobile transactions within the store or some kind of digital signage. A new product won't likely be announced until later this year, possibly in conjunction with the developers conference in June.

Apple representatives were recently at the Michigan Ave. store in Chicago, giving media sneak peaks at new apps and ways in which the iPod, iPad, and TV can all work together using Apple's mobile operating system (iOS). The company is promoting the iOS as ecosystem, placing particular emphasis on new game apps that turn the iPad and iPod into controllers. It's a different kind of gaming experience than existing consoles, and with Nintendo sales declining, there's room for another platform — one that would certainly benefit from retail stores, where they could try out all the products.

So the future of the Apple Store may rest in gaming, or just pushing the envelope as it's always done. And that makes it still sometimes hard to imagine that just 10 years ago, there were no iPods or iPhones, or that Apple was a little cult brand sold in small shops or direct mail order. Apple even offered price matching and coupons way back when. Today, Apple rarely drops prices, never holds sales on new merchandise and commands the highest profit margin in its product categories. And we all just wait and see what's coming next, because we can't even begin to guess.


Laura Heller is a freelance writer based in Chicago who specializes in mass market retail trends and consumer electronics industries. You can follow her on Twitter@lfheller. You can also sign up for an email alert for all dealnews features.
DealNews may be compensated by companies mentioned in this article. Please note that, although prices sometimes fluctuate or expire unexpectedly, all products and deals mentioned in this feature were available at the lowest total price we could find at the time of publication (unless otherwise specified).