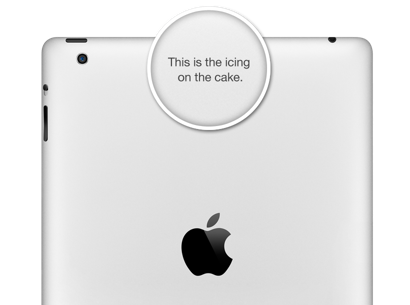 What could be nicer than gifting your beloved niece a new iPad mini for the holidays? A tablet engraved with a personalized, laser-cut message, you might think.

But, before you take advantage of Apple's free engraving services and arrange to etch "I love you" or "Merry Christmas!" on the gadget, consider how it might impact its trade-in value down the road. Sure, most of us don't like to think of our gifts being resold, but electronics by nature are highly replaceable — unlike other gifts that might get engraved like jewelry or a money clip — and Apple's devices in particular are popular second-hand items.

"Engraving really doesn't add value; in fact, it can take value away from the device," says Anthony Scarsella, Chief Gadget Officer at tech reseller Gazelle. He likens inscriptions on consumer electronics to custom details on a car — the jazzed-up engine or body parts devalue the vehicle even if they seem to improve it aesthetically.

Officials at other trade-in and buyback sites, such as NextWorth and CExchange, also warn that engraved iPads and iPods may fetch fewer trade-in dollars than similar un-engraved models. Jeff Trachsel, Chief Marketing Officer at NextWorth, says his company is upfront and clear about any engravings on the devices it resells — and demand for such items is thin. "The more personal the note, the harder it is to sell," he says. "If it's a phone number it's one thing, but if it's a love note to a significant other, it will turn a lot of people away."

The Cost of Engraving

Based on numbers provided by these companies, an engraved iPad will sell for anywhere from 20% to 30% less than an unpersonalized device in the same condition. Bob Kilinski, Chief Marketing Officer at CExchange, says an iPad 2 or iPad 3 in good condition could fetch about $120 and $300 respectively. However, similar engraved products would get 25% to 30% less.

However, not all inscriptions affect the resell value of electronics. The type of engraving affects the amount customers selling their devices will net, says Kilinski. "If it's minor and doesn't identify a person, we don't change the value [the seller will receive]. But if it has a name or address, the drop in value can be significantly more than 30%."

Similarly, Gazelle's Scarsella also agrees that engravings don't necessarily lower the buyback value of used devices. Most iPads that Gazelle buys through its website are sold to the company's international and domestic wholesale partners. "Engraving doesn't really affect wholesalers; they are going to change the part or professionally remove the engraving anyway." Because wholesalers don't pay Gazelle less for engraved devices, the company is able to offer the public the same price for engraved and un-engraved iPads of similar specs.

But in those cases where Gazelle sells used devices directly on third-party websites, an engraved iPad could net far fewer dollars. "We have a process whereby we can buff the engraving to sell the device on eBay or Amazon," explains Scarsella. "Because the process degrades the rating from good to fair, the value [a seller gets] can be 30% less."

For consumer electronics that outlive the 2- to 3-year mark (at which point many people tend to trade up to a newer device), engraving is best avoided, says Nextworth's Trachsel. "If you think of the life of your device, and whether you want to maximize the resale value, it's probably not a great idea to have it engraved."

Kilinski also goes as far as to describe engravings as "illogical" since most consumers use some sort of protective cover for their device anyway. Instead, he recommends a personalized case and the Find My iPhone app, which is more effective than engraving in case of loss or theft.

In general, the consumer electronics engraving trend is on the decline. "Consumers are very aware that Apple products hold value exceptionally well ... In less than a year there will be a new device to replace the current device," says Scarsella. "They expect to trade it, sell it, or hand it down."

At the same time, many buyers in the secondary market are extremely price-sensitive and may not care about engraving on a device if it saves them even a few dollars, Trachsel says. "They may put a case on it and never notice it has been engraved."

However, on rare occasions, engraving can actually be a selling point. Scarsella recalls an iPod touch that had a highly stylized and elaborate "tattoo of a unicorn" etched into its metal back cover. "It was kind of unique and cool," he says. "It sold as is. It's something we don't see often." But apart from the more artistic engravings, it's in most consumers best interests to avoid personalization along the lines of names and addresses, as these engravings will likely depreciate the value of the device.

Related DealNews Features:
Follow @DealNews on Twitter for the latest roundups, price trend info, and stories. You can also sign up for an email alert for all DealNews features.
DealNews may be compensated by companies mentioned in this article. Please note that, although prices sometimes fluctuate or expire unexpectedly, all products and deals mentioned in this feature were available at the lowest total price we could find at the time of publication (unless otherwise specified).

gizmovision
take a wire brush to it on a dremmel tool
February 13, 2014

harpervalley300
Jeff Trachsel, Chief Marketing Officer at NextWorth, says his company is upfront and clear about any engravings on the devices it resells — and demand for such items is thin.

GiaHuy
what if I like the product, and do NOT like the sticker sticks onto my device ?
December 4, 2013

bcope01
Why not put an aesthetically pleasing sticker over the engraving and call it good? Seems like they are just looking for an excuse to screw over the person trading the device in. Doubt they are actually reselling the item for 30% less than like items without engraving.
December 3, 2013

strikeone
Thanks for finally putting some numbers to all this, great points.
December 3, 2013