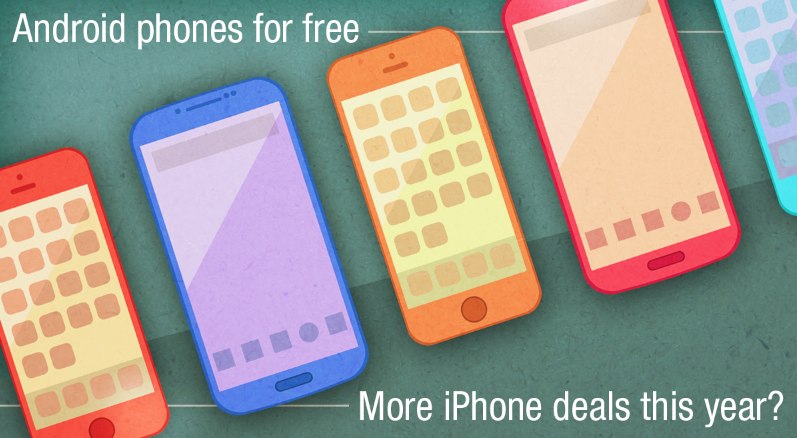 Black Friday 2012 blew our minds by offering up several of the hottest new phones for a profit — something we hadn't seen happen in years. With 2013's phone landscape eerily similar to last year's, we're predicting a return of these Black Friday phone deals in which customers come out ahead by getting a discounted phone and a gift card or credit of some sort.

In the movie Groundhog Day, Bill Murray's character lives the same day over and over again. When looking at the hot, new Android phones heading into this Black Friday season, you also might experience déjà vu. Last year's sales included deals on a new Motorola line of phones and the newest Samsung Galaxy smartphone. This year's models include the new Motorola line (including the MAXX, Droid Ultra, and Moto X) and the newest Samsung Galaxy S4! Since the release schedules of these phones are almost exactly the same, too, it stands to reason that we'll be seeing very similar discounts on these handsets.

Two weeks before Black Friday last year, both Amazon and T-Mobile offered a wide selection of Android phone deals for 1 cent and $0 after rebate (respectively) for users who started a new 2-year contract. We predict that we'll see similar deals again this year, too. However, for an even better deal, watch for smartphone promotions on the Wednesday before Black Friday; last year, this is when we saw the first "for-profit" deals, as Walmart, Amazon, Best Buy, and Dell all offered gift cards of up to $100 with select Android purchases. Even the uber-popular Samsung Galaxy S3 was included in the promotions.

There's a catch, of course. Although these smartphones were discounted, they weren't free (the S3 cost $48) and the "profit" came in the form of store gift cards. There's a possibility that more stores will offer similar deals in 2013, but how many retailers would you really want a $100 credit to? Either way, these deals will continue into the days after Black Friday and might even return later on in December as well.

If store credit isn't your thing, free or near-free phone deals will almost certainly return after Black Friday. For example, during the December lead-up to the Christmas season, the Galaxy S3 dropped to 1 cent. We predict that this will happen again for the Samsung Galaxy S4, and perhaps other top Android handsets, too. So if you miss the for-profit deals during Black Friday, shopping after the holiday weekend is a safe alternative.

In the past, the iPhone hasn't been a major player during Black Friday, but there are reasons to wonder if this year will be different. We've already seen some crazy deals on the latest iPhones, since Sprint knocked a full $100 off both models for new customers who port their number from another carrier and commit to a 2-year contract. This shows that retailers are willing to use the iPhone like a loss-leading doorbuster in the hopes of securing additional business and publicity; as such, we might actually see some iPhone deals for the current models this Black Friday. Moreover, Apple just discontinued the barely-a-year-old iPhone 5, which remains an appealing option for many users; it currently sells for $100 at many stores, so look for deals that knock it to $50 or less.

However despite the Sprint promotion (which is only applicable for a very small segment of users), it's important to keep in mind that only Walmart has stepped up to offer a "normal" price cut for contract renewals. Thus, if 2013 Black Friday iPhone deals mimic those from last year, then you can expect discounts on refurbished older generation models like the iPhone 5, and, if you're lucky, the 5C and 5S. For more details on Black Friday iPhone deals, check out our complete Apple predictions page.

Currently, they have this "Holiday Central" thing that has pretty weak deals in it, but they will give you a $50 in-store credit when you switch to them. However, these deals end 11/28, which would leave plenty of room for a Black Friday sale.

Last year, T-Mobile themselves did have a one-day sale on BF, but there was nothing very noteworthy about it. In fact, I'm not seeing ANY phones for the T-Mobile network listed on Black Friday. (Though they did start popping up on 3rd party sites - wirefly, etc - a couple days later, but there were not many).

Honestly, we just don't have a lot of precedence from T-Mobile to claim a big sale ... but there is always the chance that they will surprise us. I'd suggest keeping an eye out for their say, but keep one eye on 3rd party merchants to see if they offer a sweet enough enticement to switch carriers.

Noblewolf
I was hoping someone (the OP) would reply to my previous comment/question.
November 25, 2013

Noblewolf
I wonder what type of black friday sales t-mobile is going to have. I plan on switching but waiting till black friday to see what type of discounts they have on their phones, if any. I already have a SGS4 from verizon and do not want to downgrade. I also do not want to use their monthly payment plan. I just want to buy the phone up front... with my company's discount, the 2 line family plan with unlimited everthing comes out to $78 plus tax.

If you (DN) have any ideas or predictions what T-mobile black Friday promotions... I am all ears.

BUGNBXR
Currently, Target is offering the iPhone 5c for $49.99 with two year contract. No need to wait for Black Friday.
November 3, 2013

As I become more interested in not having to have a 2-year contract & $600 tier phones, I do look forward to deals on unlocked/no-contract phones. This is just my personal preference.
October 9, 2013

Blog · Marketplace · 4 days ago
The 11 Best Items to Sell Online in July 2021
Want to know what to sell in July, a month that could mark a turning point for both consumers and Marketplace sellers? We go over the items that were most popular with DealNews readers in July 2020 and July 2019.

Blog · Roundups · 4 days ago
The Best Electronics Deals
From TVs to turntables and smartphones to Switches, there's a grand plethora of electronics deals to pick from, so we've narrowed it down to five of the best to help you choose. The results will shock you! (Hopefully not from faulty wiring.)

Get this price via coupon code "DNEXP" and save $80 off list. Buy Now at Proozy

That's a savings of $76 off list price. Shop Now at That Daily Deal