Apple Undercuts Apple, Offers Refurbs for Up to $100 Less on Its eBay Store 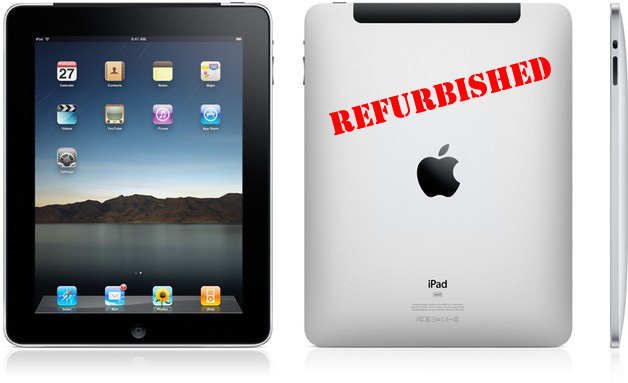 Late last year, it was discovered that Apple was potentially selling its refurbished wares through eBay, discreetly under the seller name Refurbished-Outlet. At the time, 9to5 Mac pointed to the near identical re-certification practices as evidence that this was an Apple-run outfit; all items came with a full 1-year warranty, final inspection was completed by Apple itself, and all of the items were priced the same as the Apple Store. The eBay front still exists, but it appears as if the latter practice has changed — and in the consumer's favor.

dealnews recently discovered that several Apple items on the eBay store have dropped to prices that are lower than what the Apple Store charges, in some cases by a significant margin. Currently, the most notable price cut is on the current-generation 13.3" MacBook Air with a 128GB SSD, which comes in at an all-time low of $899 — $100 less than what Apple charges directly.

Additionally, the eBay store offers both the fourth-generation 32GB and 64GB iPod touch players for $179 and $229, respectively; that's $30 and $50 less than Apple Store prices. Even more curious is the fact that we've actually seen the Apple Store offer these exact price cuts in the past; both models fell to $179 and $229 in January.

Lamentably, the MacBook Pro and 256GB MacBook Air offerings are priced the same as the Apple Store, as are all of the third-generation iPads. Both of the refurbished iPad 2s are cheaper, but they're only available in Verizon 3G flavors: the 32GB is $429 and the 64GB is $529, which are both $50 less than their price tags at the Apple Store.

Why Are Apple's Prices Lower on eBay?

Discounts are of course great, but why is Apple selling its refurbished products at a different price? And why is it using a mysterious eBay store to begin with? AppleInsider has suggested that Apple has been experimenting with eBay in "unconventional" ways to push laptops in large volumes. The publication floats the theory that the manufacturer is approaching "eBay power sellers" and giving them MacBook Pro Retina laptops to sell at a discount. While that involves third party sellers and a computer model that isn't currently in the Refurbished-Outlet store, the idea of discreetly promoting discounts in order to increase sales could still apply.

Regardless, the news means that consumers have a new opportunity to save money. And as we've said many times before, purchasing an Apple-certified refurb is an excellent way to score an iDevice at a discount since the manufacturer does a near flawless job of refreshing its electronics. In fact, for many people an Apple-refurbished product is the only refurb they'll buy. With these recent cuts, those consumers can now get that same quality second-hand product for even less.

Interested in buying refurbished Apple deals? Set up an email alert to receive notification as soon as we post them to the site.

Related dealnews Features:
Follow @dealnews for the latest roundups, price trend info, and stories. You can also sign up for an email alert for all dealnews features.
DealNews may be compensated by companies mentioned in this article. Please note that, although prices sometimes fluctuate or expire unexpectedly, all products and deals mentioned in this feature were available at the lowest total price we could find at the time of publication (unless otherwise specified).

jmckeithmd
OK, What did you guys do? When I go to the Refurbished-Outlet store on e-bay, there is nothing for sale. Did Apple withdraw their products now that you outed them?
April 1, 2013

Adventure Seeker
Sure, snaimpally... If that happens, think of the volume... think of the commissions for ebay.
March 8, 2013

qaz111111
IF you are shopping for an item and haven't looked on ebay then you are not shopping. The current edition of ebay charges too much for most individuals to stomach. Thus the majority of sellers are businesses of some sort. Often the business is an individual whose store front is ebay. Beware of warranty issues from buying through this channel. Frauds are not that uncommon as well so do protect yourself. IF you want a deal on an apple product then educate yourself on the item and it's generations because you may be buying an older version of what you want without realizing it until it is too late. Buyer beware. IF the deal looks too good... find out what you don't know!
March 8, 2013

Greg the Gruesome
In this context, it's "discreetly" not "discretely".
March 7, 2013

snaimpally
Ebay originally started as a consumer to consumer website. However, in the last 10-12 years, ebay management has made a concerted push to get more businesses to sell using ebay. It would not surprise me if ebay is offering Apple incentives (lower commission based on volume etc.) to sell on ebay. Ideally, ebay would like to see all Apple refurbs on ebay, with the Apple store merely offering a link to their ebay store.
March 7, 2013

VIEW ALL
Blog · Morning Jolt · 3 hrs ago
5 Deals You Need to Know Today: Realize Your Lighting Nightmare Before Christmas at Woot
Your home can become a beacon of monstrously uncoordinated multicolored lights with the savings Woot is offering on holiday lighting. Check out this offer and more in our roundup of the five best deals we found over the last 24 hours.
Blog · Consumer News · 17 hrs ago
How Will the Omicron Variant Affect Your Travel Plans?
Most of us are probably well aware of the delta variant of COVID-19, but now the omicron variant has arrived. How will omicron affect your travel plans, whether for the holidays or beyond?
Blog · Consumer News · 2 days ago
Every Major Store's Holiday Return Policy for 2021
As much as we hope everyone will love the presents we give them, that doesn't always happen. Check out our guide to the holiday return policies at 48 top stores, in case you or someone you know needs to return gifts.
Blog · Consumer News · 5 days ago
Yikes! What to Do When Your Amazon Package Is Not Delivered
Now that Amazon packages are trackable to within minutes of delivery, one lost parcel can seem like a mystery worthy of a podcast. Before you freak out, check out our guide on what to do if your Amazon package never arrived.
Blog · Roundups · 5 days ago
The Best Green Monday Deals of 2021
Green Monday is December 13 this year, and it'll be a great day to find last-minute savings. We're rounding up the best Green Monday deals for 2021, so you can take full advantage of the discounts!

That's $102 off list and the best deal we could find. Buy Now at Harman Audio

Coupon code "IRELAND250" saves $250 per person on a wide selection of tours and explore the cliffs, castles, and Cadbury chocolate of the Emerald Isle.

(Seriously, don't sleep on Cadbury when you're there - you may want to bring an extra suitcase to bring some home.) Shop Now at Dunhill Travel

That's the best price we could find by $170. Buy Now at Walmart

Bundle up and cross off two popular bucket list items, with a Northern Lights by boat tour and visit to the Blue Lagoon, at a $64 low. Buy Now at Travelzoo