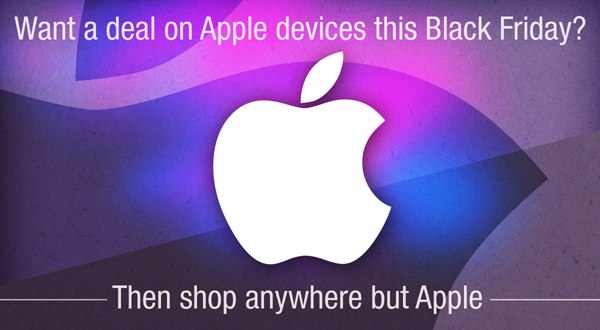 You may think that the Apple Black Friday sale is the best time to purchase all things Apple, but it's actually an extremely mediocre promotion. Yes, the media will flock to cover it and your local Apple Store will be overcrowded with shoppers, but year after year Apple offers the same predictable 5% to 10% off iPods, computers, and iPads with free shipping sitewide. These are discounts that, quite frankly, can be beaten elsewhere.

Where to Find the Best Apple Black Friday Deals

Like we've seen in previous years, authorized resellers like Amazon, Best Buy, and MacMall will have better discounts than the Apple Store. For instance, last year we saw Best Buy shave $60 off all new, current-generation iPads, whereas Apple took just $41 off. MacBook Pros and MacBook Airs also saw discounts at Fry's and Amazon that were better than Apple's own sale. Bottom line: if Apple is taking 5% to 10% off, you can expect resellers to discount as much as twice that amount, or up to 20% off.

Black Friday iPad Deals Will Include the iPad Air

The iPad Air and iPad mini 2 are now official. However, bargain hunters looking for iPads on sale may want to seek out Black Friday deals on previous-generation models.

For instance, last year when the iPad 3 was discontinued, Meijer took $50 off all models; conversely, we've seen two retailers in the past week drop the price of the now-discontinued iPad 4 to a slightly lower $399, or $100 off. (Keep that number in mind if you're considering buying the older iPad 2, which currently still retails for $399.) If you missed out on those deals, then be on the lookout: we will likely find similar offers between now and Black Friday, although the price is unlikely to drop below $399 since retailers still offer the iPad 2 at that price point. Alternatively, Apple currently offers refurbished iPad 4 tablets priced from $379.

Another potentially surprising prediction is that we actually expect to see deals on the iPad Air. Last Black Friday we found a few deals on the then brand-new iPad 4, and similar price cuts on the iPad Air would drop the 16GB WiFi version to $440 (12% off) just weeks after its debut. On its launch date Walmart dropped the 16GB model's price to $479 (a first for any iPad debut), and soon after Staples and Best Buy followed suit.

If you want a deal on the upcoming iPad mini 2, however, you might be in for a disappointment; last year we didn't see any Black Friday discounts on the iPad mini, probably because it was an entirely new product category. And with Apple admitting there might be a shortage of iPad mini 2s, scoring one will be twice as hard. However, starting in early 2014 we should see an influx of deals that drop prices on the new tablet by 10%.

With the iPad 4 erased from Apple's lineup, consumers can save a few bucks on this tablet by opting for a refurbished model rather than a factory-sealed one. Although refurb models tend sell fast, you can expect to see prices on refurbished units discounted to $379, which is roughly 24% off retail.

Surprisingly, Apple decided to keep the original iPad mini in its lineup slashing its price to $299, which is $30 less than before. But that doesn't mean the discounts stop there. When the iPad 2 was first knocked down to a lower price tier in 2012, resellers began periodically taking an additional 10% off its new retail price. By Black Friday, the 16GB version even saw a 15% discount. If discounts to the mini follow a similar trend, then resellers like MacMall and Micro Center might offer the iPad mini for prices between $254 and $269 in the coming months. However, keep in mind that Apple currently sells factory-refurbished iPad minis starting at $249, and many people consider these units good as new. 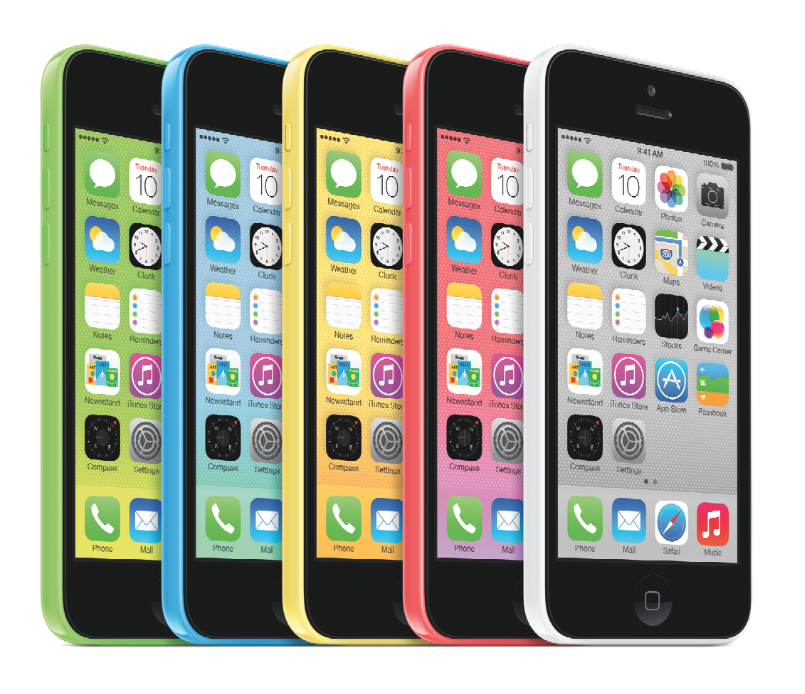 Is This the Year for Black Friday iPhone Deals?

Typically, the iPhone hasn't been a major player during Black Friday. Two years ago, we were surprised to see a single sale on the iPhone 4S (the latest model at the time), and last year the tradition of scarcity continued as we only saw a pair of refurbished deals; AT&T offered both the refurbished iPhone 5 from $99.99 and a refurb iPhone 4S for $1. While these offers were excellent at the time, no one could claim that iPhone deals have been numerous during the Black Friday season.

However, there are reasons to wonder if this year will be different. First, we've already seen some crazy deals on the latest iPhones in the name of marketing and publicity. While Walmart's modest discounts on the iPhone 5C and iPhone 5S are comparable to what it offered last year shortly after the iPhone 5 release, Sprint took its promotion even further by knocking a full $100 off both models for new customers who port their number from another carrier and commit to a 2-year contract. While such a discount hardly helps someone who has no interest in leaving their wireless provider, it signifies one thing: retailers continue to push the discounting boundaries with the iPhone in the hopes of securing long-term business and garnering publicity; we thus wouldn't be surprised to see another retailer offer a deal on the current phones this Black Friday. Just remember that there will probably be some catch, like having to pick it up in-store or switching providers.

Moreover, Apple just discontinued two phones with the latest announcement — both the iPhone 5 and iPhone 4 are no longer being manufactured. It would be hard to make the iPhone 4 any cheaper, so if anything, retailers would have to offer it for-profit to make it an enticing Black Friday deal. More likely, however, is that we'll see discounts on the only-a-year-old iPhone 5, as it remains an appealing option for many users; it currently sells for $100 at many stores, so look for deals that knock it to $50 or less.

However despite the Sprint promotion (which is only applicable for a very small segment of users), it's important to keep in mind that only Walmart has stepped up to offer a "normal" price cut for contract renewals. Thus, if 2013 Black Friday iPhone deals mimic those from last year, then we might only see refurbished deals on older generation models like the iPhone 5 (and if you're lucky, the 5C and 5S). And in such a case, you'd be better off waiting to buy the iPhone 5S until December or later: Walmart and Fry's Electronics slashed more than $70 off the iPhone 5 last year during the holidays.

Blog · Roundups · 42 mins ago
The Best Electronics Deals
From TVs to turntables and smartphones to Switches, there's a grand plethora of electronics deals to pick from, so we've narrowed it down to five of the best to help you choose. The results will shock you! (Hopefully not from faulty wiring.)

Blog · Marketplace · 5 hrs ago
The Ultimate Guide to Reducing Amazon Seller Fees
Selling on Amazon comes with a lot of fees, and if you don't pay close attention, it's all too easy to spend more than you make. So we look at Amazon selling fees and talk about how you can minimize them — or avoid them entirely.

Blog · Morning Jolt · 6 hrs ago
5 Deals You Need to Know Today: Prices from $5 in Reebok's End of Season Sale
The season has apparently ended and Reebok is here to celebrate with prices starting from $5. Check out this offer and more in our roundup of the five best deals we found over the last 24 hours.

Blog · Buying Guides · 1 day ago
The 6 Best Things to Buy in February (Including Presidents' Day Sales!)
February might not seem like a good month to shop, but its holidays bring at least a few opportunities to save. Check out our guide on what to buy in February and what to skip.

Blog · Consumer News · 22 hrs ago
More Men Than Women Have an Emergency Fund: Here's How Our Shopping Habits Will Differ in 2021
We conducted an online shopping survey to see how consumers are spending and saving their money, and we want to share our findings! Check out what we learned about the shopping habits of men, women, and various age groups.

Apply coupon code "JANDEALS" for the best price we could find by $7. Buy Now at Columbia

It's $45 under list and the lowest price we could find. Buy Now at PlayStation Store

That's the best price we could find by $15. Buy Now at Macy's

Give some sweets to your sweetie and save a buck under what you'd pay at Walmart. Buy Now at Amazon

Apply coupon code "63WTNTY259" to get the lowest price we could find by $10. Buy Now at Newegg