Only media players that support Amazon's Prime Video app will be sold on the e-tailer's site.
BY:
LOUIS RAMIREZ
DealNews Contributing Writer 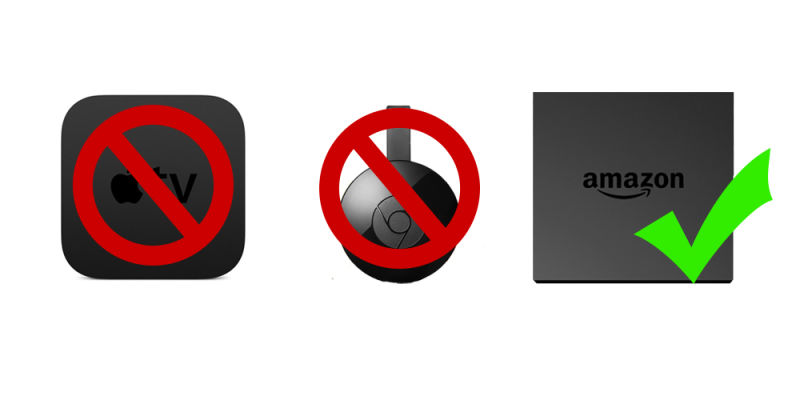 The biggest online retailer on the planet just decided to ban two very popular streaming devices on its site.

On Thursday, Amazon announced that it would end all sales of the Apple TV and Google Chromecast media players by the end of this month. The reason behind this surprising move, according to Amazon, is to avoid confusion.

Both Apple TV and Google Chromecast don't fully support Amazon's Prime Video application. In an email the store sent to sellers, Amazon said that "Prime Video has become an important part of Prime. It's important that the streaming media players we sell interact well with Prime Video in order to avoid customer confusion."

As a result, Apple TV and Google Chromecast will get the virtual boot after October 29. However, other streaming devices and consoles that support Prime Video, such as the Xbox One, PlayStation 4, and Roku set-top boxes, will continue to be sold via Amazon.

We Will Still Find Deals on the Apple TV and Chromecast

The good news is that this shouldn't have a negative affect on the prices we expect to see for these streaming players. While Amazon did slash the price of the Chromecast and Apple TV last Black Friday, other retailers like Newegg, Target, and Best Buy offered similar or slightly better deals of their own.

As for Amazon's Fire TV, we can only hope this means the e-tailer will offer more aggressive deals on its own streaming media options.

Readers, what do you think about Amazon's decision? Share your thoughts in the comments below!

As for blocking Chromecast I don't see that as a big deal. I have Chromecast, but my Android devices have older versions that are not new enough to stream to it. The apps that do work want access to all of my personal information. Great marketing ploy to collect viewer demographics while providing little benefit.

Yes Amazon tracks me as much as Google. But Amazon doesn't have access to my Google+ account. Yet.

MacsAre1
Turns out Apple doesn't sell the Chromecast or the Fire TV stick in its stores, either. Amazon's just finally reciprocating the favor.
October 7, 2015

snarminoxx
AppleTV and Chromecast represent a threat to Amazon's streaming PrimeTV service. With Apple (and possibly Google) in the process of developing its own Netflix/PrimeTV-like streaming service with proprietary content, it is only natural that Amazon would take at least some protective measures.

By not selling AppleTV, Amazon makes it harder for Apple to distribute a device that will serve to undermine Amazon's own subscription service. Using the rationale that Chromecast or AppleTV don't interact well with PrimeTV is window-dressing, as such technical issues could easily be resolved if they were motivated to do so.

In summary, Amazon has no legal obligation to sell its competitors' products on its website; it is smart to discontinue sales of products that undermine its company interest.
October 7, 2015

Jsmithrules
I thought at one point that Amazon's ideology had to do with giving consumers control; I guess not. Rather than always having to depend on big box retail stores who price gouge. Amazon opened us to the ability of giving us control over consumer goods: buying alternatives, price matching, and consumer feedback. But at this point I am starting to think that they are changing that ideology, they just want to be like google, apple, and microsoft.
October 6, 2015

R1one
well, amazon seems to be offering the same services or better devices like chromecast or apple TV. Is apple or Chromecast doing and selling Amazon products? Big No. Business stand point, Amazon is doing a wise decision. They are not only selling Amazon fire stick but all wide variety of products. Sure amazon will lose sale but thats is not the ultimate goal. Amazon want to be Amazon in its entirety! And so is Apple, Google etc. This means competition and its good for the customers.
October 6, 2015

parlski
Will they not sell DVD players or Televisions that do not support amazon prime 100%
October 6, 2015

QuikCalls
I think they will loose a lot of mindshare and maybe even invite a lawsuit but I think its a dangerous trend if they not only decide to stop selling it themselves but also tell sellers that they can not sell it on Amazon anymore. They might hurt their whole business by pulling this stunt.
PS: It would be so easy for Amazon to support the Chromecase and I wish that would happen.
October 5, 2015

spferdil
I've never signed up for Prime because I don't want (or need) any more media players. If Amazon can't make their service available on the same players I use for other services then I will not use their service. Why should you have to have a different media player for each service?
October 5, 2015

mtlmn1971
It is up to Amazon to write, release and support their App on either one of those devices. Google isn't blocking Amazon from releasing a Chromecast app and I'm sure Apple isn't as well. This is just a marketing decision to protect Amazon's own devices, the Fire TV and Fire Stick. Roku as well as Play Station and Xbox all previously supported Amazon content before Amazon had the fire devices but with the new Chromecast and new Apple TV, I think Amazon is worried they may lose ground. I am a Prime member and I own a fire tv and 2 sticks. I also own 2 chromecasts. I can easily go and purchase either the new Chomecast or ATV elsewhere but I will be buying the Chromecast audio to use on a vintage stereo. With all that said, I understand their point of thinking but I don't like being told what I can purchase or as a seller being told that because it competes with our own product, you can no longer purchase it or sell it. I may not renew my Prime just for this reason. My decision.
October 5, 2015

Greg the Gruesome
@Yeoman007: Then why does the Prime Video app on Roku work well?
October 5, 2015

Yeoman007
@byebyegravity - Apple and Google have NO control over how well the Amazon Prime app---written by AMAZON---works. That is entirely under AMAZON's control.
October 5, 2015

kinghiggs
That's "effect," not "affect." Effect is the result of a cause, while affect is to cause a change.
October 5, 2015

Louis Ramirez (DealNews)
@pmurray63
Correct. It's easy to blame Google and Apple, but at least in the case of Chromecast -- Amazon wants users to use its "version" of Android and not play by Google's guidelines.
October 5, 2015

pmurray63
Yeah, from what I read over the past few days, Amazon apparently doesn't want their service to work with other hardware. Glad I didn't take them up on their Prime sale last week.
October 5, 2015

jacksj3
This is a ridiculous decision. They could easily make their apps compatible with the Chromecast and AppleTV and chose not to do so.
October 5, 2015

byebyegravity
This makes perfect sense. If I bought a video player on Amazon, I would certainly expect it to support Amazon's video service.
October 5, 2015

Apply coupon code "60QJMNLX" for a savings of $21. Buy Now at Amazon

Apply coupon code "4X4XZI4V" for a savings of $4. Buy Now at Amazon