7 Reasons Why the New Apple TV is More Expensive

Apple's streaming device is $50 more than top-of-the-line competitors like the Roku 3. So what are you getting for that money?
BY:
MOLLY MCLAUGHLIN
DealNews Contributing Writer 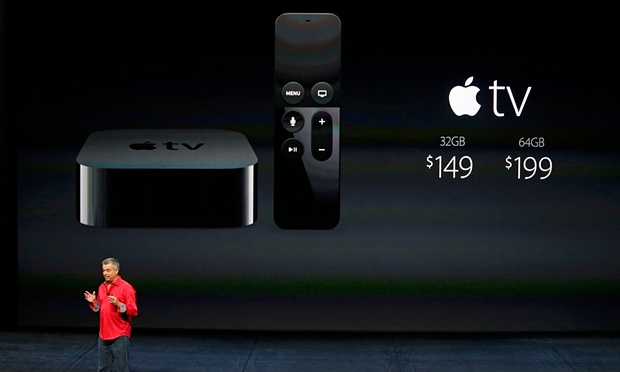 After three years, Apple's streaming device is finally getting an update, as Tim Cook announced at yesterday's Keynote Event in San Francisco.

The revamped Apple TV features a brand-new user interface and OS (tvOS), a dedicated App Store, and a remote with Siri integration and a touch interface. Two models will be available in late October, a 32GB unit for $149, and a 64GB unit for $199.

That's a significant increase from the $99 price tag that the previous-generation Apple TV originally commanded. Plus, considering Roku offers a streaming stick for just $49 as well as a full-featured set-top box for $99, and Google's Chromecast sells for just $35, Apple presumably wants to present the new device as a premium product.

In order to do that, it needs to offer something extra in terms of performance to justify the additional price hike. Here's a look at some of the new features that make the latest Apple TV more expensive.

The remote, now known as the Siri Remote, has a glass touch surface across the top that you can use to navigate the Apple TV interface, gliding through content. You can also use the touch pad to rewind and fast forward while watching a program. The Siri remote communicates via Bluetooth with the set-top box, which means you don't have to point it directly at the Apple TV. You can also access volume control on the remote. Apple says the remote will last for up to three months on one charge.

On the new remote, you can press the Siri button to activate voice commands to search, pause, rewind, and fast forward; you can even ask Siri to skip ahead by a certain amount of minutes!

You can also use Siri just as you would on your iPhone, using broad search terms, such as "show me funny movies." In these cases, you can view the results along the bottom of the screen, and easily return to what you were doing before if you don't find what you need.

If you conduct a more targeted search, such as "show Modern Family episode with Edward Norton" — a search that Apple demonstrated at the event — the Apple TV will take you to the Modern Family show page, with that episode selected (if that content is available).

Get Information About What You're Watching

Voice activation goes beyond just the standard controls you're accustomed to on a remote. For example, if you miss a line, you can ask Siri "What did she say?", and the video will rewind 30 seconds and temporarily turn on captions. You can also ask, "Who stars in this," and the cast will display at the bottom of screen.

Finally, you can ask Siri for information like sports scores or weather while you're watching a video. You can then swipe up on the touch pad to get more details, and the video will automatically pause in the background until you return.

Previously, the Apple TV didn't have its own app store; you had to wait for software updates to get new apps. Now, Apple has designed a tvOS (based on iOS) that is available for developers to create apps for the Apple TV — and not just streaming apps, but games, online stores, and many of the apps you can use on your iPhone or iPad.

New apps include Airbnb, Zillow, and Gilt. The iTunes store has been redesigned to match what you see on mobile, and the new Apple Music service will also be available on Apple TV. One purchase buys the app or content on all your iOS devices.

Apple's big push with the new Apple TV is the integration of gaming. The remote includes a wrist strap and a built-in accelerometer and gyroscope so that you can use it as a game controller (similar to the Roku's offering and reminiscent of the Wii). Some games allow multiple players to join in using their iPhone or iPod touch.

MLB.TV announced at the keynote its MLB app for Apple, which offers live baseball games in full HD at 60 FPS, so you don't miss a play. During games, you can choose to display baseball stats, synced with the live broadcast. You can also get notifications on other games, enable split screen if you want to follow multiple games and swipe back and forth to change focus. In 2016, the NHL Game Center will launch its own app for hockey fans.

This is a pretty huge deal, as the inability to stream sports has been one of the major obstacles for many households hoping to cut cable altogether. However, some other options have become available (like with Sling TV), and the details of the MLB and NHL's offerings for Apple TV have yet to be seen.

One of the more frustrating things about streaming set-top boxes is that you have to search each app separately to find the TV show or movie you'd like to watch. Now, using Siri voice commands, you can search iTunes, Netflix, Hulu, HBO, and Showtime all at once (Apple will add more services in the future). As of now, Amazon is not included in the bulk search.

For now, Apple TV can't match the amount of content available on the Roku, which has more than 2000 streaming channels. The Roku also has voice search, a point-anywhere remote, and motion control for games. The big deal here is tvOS and the new App Store, which opens up huge potential for Apple and puts your TV experience more in line with mobile.

A lot of Apple TV is resting on potential right now. We're excited to see how the App Store looks when the Apple TV is available at the end of the October. Stay tuned, and be sure to check DealNews for all the latest TV streamer deals.

dtrudea
Geez Wally! Do us all a favor and take an English class so u learn how to write properly.
September 12, 2015

Lindsay Sakraida (DealNews)
@swinn Apologies to everyone who pointed this out, we meant to say the previous generation Apple TV was $99, and remained that way for 2 1/2 years before it dropped to $69. So while the original was much higher, this is still a jump from what people are accustomed to for the Apple TV in recent years.
September 11, 2015

Heyitsrick
"The big deal here is tvOS and the new App Store, which opens up huge potential for Apple and puts your TV experience more in line with mobile."

Why is there an expectation that people want to do traditional "app" things on a giant screen TV? I can mirror/cast my Android phone to my HDTV, and some apps actually even scale to full-screen mode well. But it still doesn't make me want to use my TV for that. I've been able to display my laptop's screen in "HD" resolution on my HDTV, but that doesn't make me want to surf the web on it.

Video programming/content is what is key, not "home automation", etc. I'm not going to buy an expensive streamer to give me a bigger screen to turn my lights on/off. Make sense? Perhaps the advent of more Wii-style gaming might make it useful, but not for apps in the traditional sense. Not for me, anyway.

swinn
"That's a significant increase from the $99 price tag that the first Apple TV originally commanded."

denverphotopro
I'll stick with my Roku 3, thanks. Good review but nothing about the new Atv is attractive enough to get me to buy it.
September 11, 2015

Anthony S Jennings
The price increase is directly related to storage capacity (because the app store is coming). Current generation Apple TV's have very little storage, which I believe act simply as a cache for streaming. First generation Apple TV's (the big white ones) had lots of storage to sync content from your desktop iTunes to it. And it too was pricey.
September 11, 2015

naredeals
That was a great synopsis! Better than I could get at the NYT or other tech publications. Thanks. I think this content is a great dealnews feature. Many of us come for the deal so it's nice to get perspective too.
September 10, 2015

TravTech
Roku has a search function that searches all of the major apps (Netflix, Hulu, HBO, Vudu, Amazon, and more) at once. And even some of the lesser apps like Crackle.

It may not search every one of the thousands of apps / channels available on Roku, but finding specific content isn't quite the chore you've made it out to be either.

The newer model Roku 3's have voice search and have had it for some time now. Not sure what else you'd be needing voice commands for with such simple devices, unless maybe you've got some sort of handicap.

Roku may not have been the first, but they do it right. All I've seen since from Apple and Google (and some lesser brands) have been them trying to keep up.

Heck Roku even allows the installation of "unofficial" apps and channels. Databases of which are available on the web allowing for even more preference customization.
September 10, 2015

Lindsay Sakraida (DealNews)
@Ardbeg Your note made me realize I miscounted for the headline, we have seven entries here. So your point makes #8 ;)
September 10, 2015

Cilvre
did everyone somehow forget how expensive the earlier apple media players used to be before that last model? im surprised its not even more expensive. Reason? just cause.
September 10, 2015

Stack savings on a selection of big brands like adidas, Nike, Toms, Lacoste, and more. Shop Now at Shoebacca