Purchasing concert tickets is getting increasingly expensive, but what if you could stay at home and watch your favorite concerts for free? Thanks to the Internet, music fans can do just that. From Radiohead to The Rolling Stones, the following websites will let you stream live and pre-recorded concerts so you don't have to deal with overpriced beers and sticky floors.

FabChannel is the closest you'll get to attending a concert from the comforts of your home. This site hosts over 700 full-length concerts from major and indie bands such as Bloc Party, The Black Keys, The Fratellis, and more. Performances are streamed from one of two concert venues in Amsterdam — Paradiso or Melkweg. (The site also has partnerships with two venues in Barcelona and with the Roxy in Los Angeles.) All of the shows are professionally filmed by FabChannel crew using different angles and cameras. (You can take a look at the FabChannel equipment here.)

Most of the site's concerts are filmed in widescreen although a few are in standard aspect ratio. Quality-wise, video looks great on a laptop, but suffers from pixelation in full-screen mode. Sound quality, however, is consistently good. Each concert is preceded by a brief Google ad, however the rest of the show is commercial free. Recordings include everything from the moment the band comes out to seconds after the final encore. (Opening acts are not part of the stream.)

The site's interface and video player are second to none. When watching via the embedded window, a small sidebar to the right of your screen lists the concert's set list and lets you jump to any song with a simple click. (Otherwise, concerts play as one continuous stream.) While listening to any song, you can also click on the "buy" button to purchase it from the iTunes Store. (Of note, the link takes you to the European iTunes Store.)

Concerts take a few days to post, but each show is posted with the band's and record label's permission. (Universal Music is one of the site's biggest labels.) Most concerts remain archived, but in some cases the band or record label only grants temporary permission to stream its footage. In those cases, the concert is marked as "expired," as with this Lily Allen show. In addition to streaming shows, FabChannel also integrates well with other sites. For instance, members (membership is free) can embed concerts onto their Facebook pages, MySpace profiles, or Blogger accounts. You can also download select tracks for free or have the site e-mail you for when they stream live concerts. Our one nitpick with FabChannel — you can't control the volume setting on the site's player. It's either on or muted. But that's a small fault for a site that's otherwise doing everything right.

Update: Unfortunately, the deteriorating advertising market and the lack of record label participation has caused FabChannel to shut down effective today. The site's concert archives will remain available for streaming until March 13. Click here for the press release. 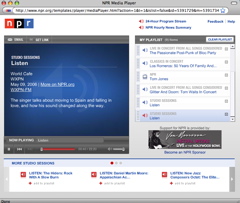 Boasting the most eclectic online music collection, NPR's All Songs Considered is a great source for music fans who like all musical genres. The site hosts full-length concerts and exclusive studio sessions from both mainstream and obscure artists like Radiohead, Tom Waits, Los Romeros, Antony and the Johnsons, and Josh Rouse. The show is recorded weekly and while most of the concerts are audio-only, a few contain video. The quality of the videos is excellent (slightly sharper than FabChannel), although you cannot watch videos in full-screen mode. Likewise, despite having a set list for each show, you cannot skip to specific songs during a stream.

Fortunately, commercials are kept to a minimum (only one brief spot is aired before each stream) and RSS feeds can keep you up to date on new and upcoming concerts. Should you want your concerts to go, you can download each NPR stream as a podcast from the iTunes Store for free.

Wolfgang's Vault is a musical paradise for classic rock fans holding over a thousand legendary rock concerts from performers like Jimi Hendrix, The Rolling Stones, Pink Floyd, and Eric Clapton. The site was started by Bill Sagan after he acquired the concert recordings that belonged to music promoter Bill Graham. Since then the site has grown to include hundreds of vintage recordings, all of which are commercial free and licensed by BMI, ASCAP, or SESAC.

Before you can stream any concerts (audio-only), you must sign-in to the site. (Membership is free.) Once you've browsed through the catalogs and found a show you want to watch, the pop-up player is launched as a separate window. It includes the show's set list and lets users jump from one song to another at any time. Sound quality is excellent as these are master recordings from Graham's archives rather than copies. Songs, however, are treated as individual files so you'll hear a slight pause after each song, which is great if you don't want to listen to the audience in between songs, but it does detract from the concert-like experience.

Wolfgang's Vault recently launched Concert Vault for the iPhone/iPod, which lets you stream its entire music collection for free from your iPhone or iPod Touch.

Offering more than just free concerts, SyncLive is an online music community where members can chat about shows, browse through archived concerts, and maintain music profiles of their favorite bands. SyncLive also doubles as podium for unsigned musicians to record and showcase their talents. (The site actually encourages unsigned bands to record their own shows and broadcast them on the site for free.)

Unfortunately, the site's interface was our least favorite. It's cluttered with tabs and suffered from slow load times. Likewise, video quality was disappointing. Various shows we watched were filmed from a distance (think bootleg DVD quality) and looked grainy in both the embedded window and larger pop-up player. You can barely discern any faces in this The Ting Tings concert, for instance.

The site displays a lot of artist information including a bio, list of upcoming shows, and a list of that performer's archived shows on SyncLive. Members can also chat with one another while watching a concert together. Although most of the site's bands are unsigned, you'll also find shows from mainstream artists like B.B. King, The Ting Tings, and Public Enemy. 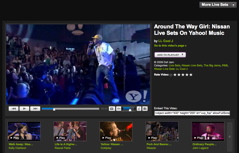 Although it features a modest library, top 40 fans can get their fix of live music from Nissan Live on Yahoo! Music. This joint collaboration between Yahoo! and Nissan features bi-monthly performances filmed at the Fox Studio in Los Angeles. Because Nissan is the sole sponsor, online advertising is noticeable although not overly intrusive.

The video player is embedded into your Web browser and gives viewers the option of viewing in full-screen mode. Videos start after a brief commercial and are not continuous, so on occasion you have to select the next song you want to stream. In addition to the videos, the site also includes concert photos and Q&A sessions with various bands. Unfortunately, you cannot fast forward or rewind videos. The site also lacks the community aspect of SyncLive. Archived artists include contemporary musicians such as Coldplay, John Legend, and Kelly Clarkson.

Of the sites we looked at, Wolfgang's Vault and FabChannel were our favorites. FabChannel in particular did an excellent job of recreating the concert experience, complete with video, audience cheers, and excellent footage.

The good news, however, is that there's no site we hated. While some sites had a better music catalog or better video quality than others, each site brought something different to the table, which is good news for music fans counting their dollars.