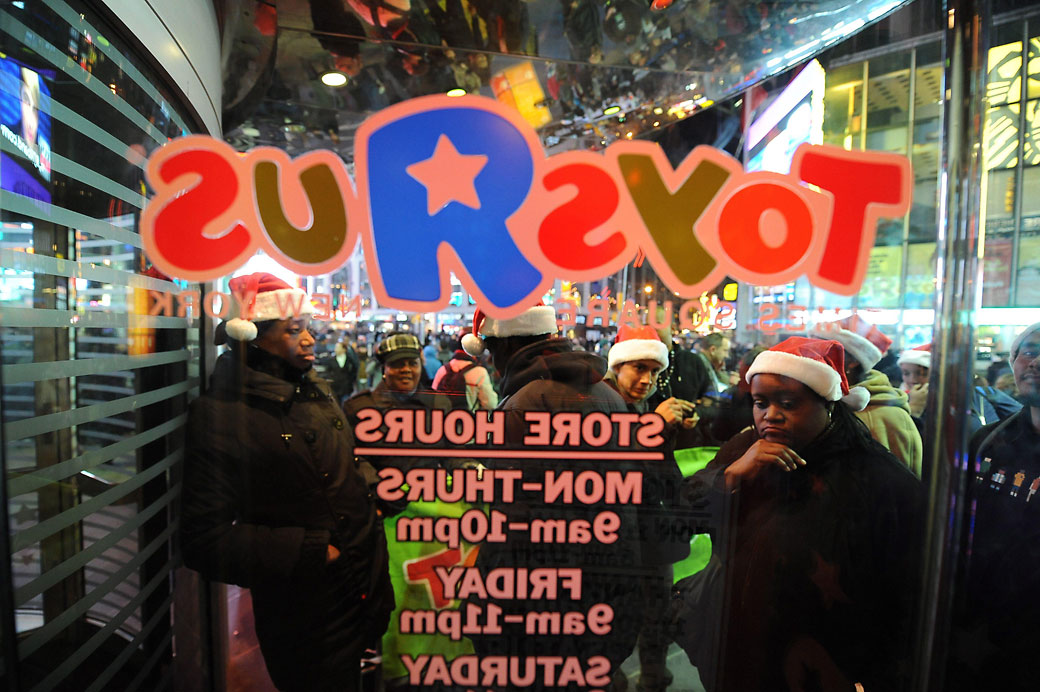 With the leaking of the 2013 Toys "R" Us Black Friday ad, parents will find a treasure trove of excellent Black Friday deals — although they might want to buy some of the best offers for themselves. Even still, we found some very popular holiday 2013 toy offerings in the massive, 28-page ad. And even though we maintain that the best time to buy toys, some of the offers are quite enticing. But before we dig in, let's talk about Thanksgiving and Black Friday store hours.

Toys "R" Us Is Moving Black Friday to Thanksgiving Day

According to the ad, Toys "R" Us and Babies "R" Us stores will open their doors at 5 pm on Thanksgiving, but sale prices will go live online at 12:01 am Thursday. However, the best deals (including the doorbusters) will be store-only offerings. It's worth noting that a selection of doorbusters are being offered on Thanksgiving only, from 5 pm to 9 pm. A different set of items will be offered as "bonus doorbusters" on Friday, starting at 5 am, but they'll be sold at this price through closing time on Saturday. OK kids, now let's check out the toy deals!

Overall, Toys "R" Us bowled us over with its non-toy deals, and thus far has presented one of the most exciting leaked ads we've seen. Its discount on the Kindle Fire HD 8.9" tablet alone is worth making a trip to the store, and its Thanksgiving-only prices on the Skylanders SWAP Force and Disney Infinity starter sets are the best we've seen. While the toy giant's leaked Black Friday toy deals are certainly competitive when compared to current prices, we think Toys "R" Us can and will do better come mid-December.

So readers, will you abandon your turkey dinner to catch the Thanksgiving doorbusters at Toys "R" Us? Or are you still waiting for a Black Friday ad to knock your socks off? Let us know in the comments below! And be sure to check out our Black Friday deals page for all the latest news, ads, and predictions.


Michael adds the finishing touches to most of the Blog articles you'll see on DealNews. His work has appeared on sites like Lifehacker, the Huffington Post, and MSN Money. See him rant about video games by following him on Twitter @ThatBonebright.
DealNews may be compensated by companies mentioned in this article. Please note that, although prices sometimes fluctuate or expire unexpectedly, all products and deals mentioned in this feature were available at the lowest total price we could find at the time of publication (unless otherwise specified).

dealinmama
For those who are saying they won't shop at such stores because they are open on Thanksgiving, please know the employees have a choice. My husband works retail and the employees were offered triple time to come in and work on Thanksgiving. There was a rush on the sign-in because many of them want some extra Christmas money. My husband chose not to work and stay home with us. No one was MADE to work on that day.
November 23, 2013

Wisepam
I totally agree!! I will not shop in ANY store that opens on Thursday. People want and SHOULD be at home with their family!!! And I am so proud of anyone that feels the same way!!!!
November 22, 2013

arielfire
sorry i want those deals... but refuse to support making people work on Thanksgiving to get me a deal.
November 7, 2013

hcass08035
I will not shop in a store that opens on Thanksgiving day, no matter how good the deals might seem. It is not necessary for retail to open on Thanksgiving!
November 7, 2013

VIEW ALL
Blog · Roundups · 6 hrs ago
The Best Men's Clothing & Accessories Deals
From adidas to Uniqlo and Allen Edmonds to Wilsons Leather, this is your guide to the best men's clearance sales, designer clothes deals, and everything discounted in the world of men's clothing.
Blog · Morning Jolt · 11 hrs ago
5 Deals You Need to Know Today: Save $100 on Sony Headphones!
These discounted noise-cancelling headphones will drown out everything except our roundup of the five best deals we found over the last 24 hours.
Blog · Buying Guides · 3 days ago
What to Expect From the Amazon Black Friday Sale in 2021
Does Amazon do Black Friday? The answer is a very emphatic yes, but don't count on the site to treat the holiday the way others do. Read on for our complete guide on what kinds of items will be on sale and how to snag the Amazon Black Friday deals that are worthy of your effort.
Blog · Buying Guides · 5 days ago
What to Expect From the Target Black Friday Sale in 2021
If Target is on your list of stores to shop for Black Friday 2021, you'll want to ensure your strategy is a winner. Read on for our guide on what to expect from the Target Black Friday sale this year.
Blog · Roundups · 6 days ago
Affordable Gaming Laptops
If you're looking for our current list of the finest gaming laptops at the finest available prices, welcome. There's deals aplenty on high end laptops and more budget conscious options as well as some associated accessories that might enhance your overall laptop gaming experience.

Apply coupon code "FLASH" to get this deal on Halloween-themed decor, clothing, and more. Shop Now at Kohl's

That's $19 under our mention from two weeks ago, $122 off list price, and the lowest price we've seen. Buy Now at Amazon

It's $60 less than buying it new elsewhere. Buy Now at Home & Cook

It's $350 under list and the lowest price we could find. Buy Now at Lowe's