Hatchimals Are Sold Out Everywhere, But Walmart Will Have Them on Black Friday

Somehow, the Hatchimal might end up being the biggest Black Friday deal of the year.
BY:
STEPHEN SLAYBAUGH
DealNews Contributing Writer 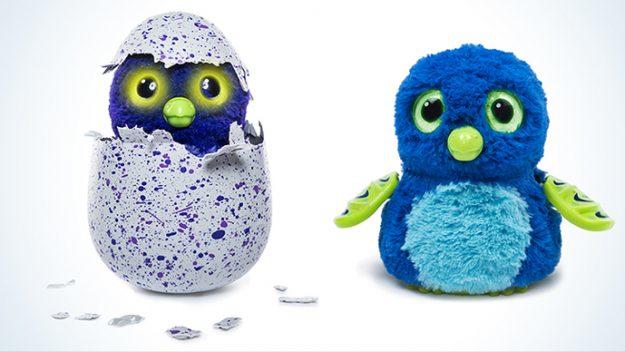 Every year, as children the country over begin writing letters to Santa, there are always one or two toys that — as if in some great conspiracy to drive parents mad — rise to the top of their wishlists. With supply unable to meet demand, such items soon become sparse and parents become frantic in trying not to dash their little ones' holiday spirit.

This year the most coveted of toys is called a Hatchimal. And because of its desirability, it might end up being the biggest Black Friday doorbuster of the year.

What Exactly Is a Hatchimal?

Somewhere between a Furby and Tamagotchi, the item arrives as an egg that hatches when your child plays with it. Once hatched, the furry animal goes through three stages — baby, toddler, and kid — learning to walk, dance, play games, and repeat words with your child.

Hatchimals come in five types — Pengualas, Draggles, Owlicorns, Burtles, and Bearakeets — with each type coming in one of two colors that isn't revealed until the toy hatches.

But regardless of what type and color your child may desire, you are going to have a heck of a time finding one. They have been flying off shelves, and most stores are now out of stock.

A note on the Hatchimals website states, "While additional product will hit retail shelves in November, we anticipate this inventory will also sell out quickly. We have increased production and a whole new batch of Hatchimals will be ready to hatch in early 2017."

As such, you currently will only find the toy, which has a list price of $60, available from secondary sellers asking for $200 or more. And apparently, there's no hope of new stock before the holidays.

SEE ALSO: The Holiday Toy Lists Are Here! Do You Care?

Walmart Is Hoarding Stock for its Black Friday Sales

Assuming you don't want to pay that much, what are your options? Unfortunately, there aren't many. In fact, there may be only one.

Walmart's Black Friday ad includes a Hatchimal discount. Despite the recent sell outs, a publicist for Walmart confirmed that the store will indeed have a limited quantity of Hatchimals in-stock when they open their doors on Thanksgiving at 6 pm local time.

Despite the recent sell outs, a publicist for Walmart confirmed that the store will have a limited quantity of Hatchimals in-stock when doors open on Thanksgiving.

But if you want to avoid the possibility of any physical altercations in securing a toy for your tot, you might be better off staying up late the night before to begin looking online when Walmart Black Friday deals start appearing at 12:01 am. Your vigilance will be rewarded, though, as they will be marking them down slightly to $48.88.

Do we know how many each store will have? Unfortunately, no. Is this a ploy to get bodies into stores on Thanksgiving? Of course! Do you have a choice? Doesn't seem like it.

What do you think readers? Have you had any luck finding a Hatchimal? Will you attempt to get one on Thanksgiving? Let us know in the comments below.

Scroogus Maximus
Oh, look, a knock-off Wuzzle. There's a reason that show failed after 1.5 seasons....and this squeal-prone dancing Furby will endear parents everywhere to the "Oops, the batteries are dead and we don't have any more" defense. Possibly also the "Dog ate it- and yes, I know we don't have a dog" argument...
November 21, 2016

Blog · Morning Jolt · 11 hrs ago
5 Deals You Need to Know Today: Up to 70% off with Overstock's BF Spring Sale
A Black Friday sale in spring? Madness and savings abound at Overstock. Check out this offer and more in our roundup of the five best deals we found over the last 24 hours.

Clip the coupon on the product page to get this price. It's $5 off and the best price we could find. Buy Now at Amazon