The Best of the Black Friday Ads: Gaming Consoles 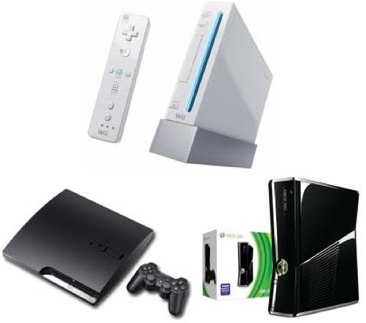 In our Black Friday predictions piece, we posited that many of the game console deals during the shopping holiday weekend would involve appealing bundle offers. And as more and more Black Friday ads have leaked, it looks like we were spot-on. That said, there are also several notable console-only deals.

Below we've rounded up all the Black Friday gaming console deal mentions we've seen so far, but there are some particularly noteworthy offers to highlight first. Nintendo fans should check out the Wii consoles for $99, which tie an October deal as the lowest price we've seen for a new Wii. (That October deal, by the way, was a bundle with in-store pickup only at Fry's; typically, only refurbished consoles hit this price point.)

While some of these offers are obviously better than others, keep in mind that most offers apply to in-store only sales and will be in short supply, so it's good to keep track of all your options. Therefore, we've rounded up all the game console ads we've seen so far.

We're constantly unearthing new ads, so keep an eye on future ones by bookmarking our Black Friday page.

Jeff Somogyi is the dealnews Media Editor. He writes features, content, and hosts the podcast. He encourages you to follow him on Twitter or on his blog, but not in real life. You can also sign up for an email alert for all dealnews features.
DealNews may be compensated by companies mentioned in this article. Please note that, although prices sometimes fluctuate or expire unexpectedly, all products and deals mentioned in this feature were available at the lowest total price we could find at the time of publication (unless otherwise specified).

VIEW ALL
Blog · Morning Jolt · 1 day ago
5 Deals You Need to Know Today: Save Over $100 on a Marmot Coat
I'd expect the yellow-bellied marmot would be too cowardly to take advantage of this coat deal, but the Olympic marmot would be all over it. Be the Olympic marmot you always dreamed of being, and check out this offer and more in our roundup of the five best deals we found over the last 24 hours.
Blog · Buying Guides · 1 day ago
The 7 Best Things to Buy in October (And 7 Things to Buy Later)
Black Friday is just around the corner, deal-seekers, but October has excellent deals that are worth shopping. Check out our guide on what to buy in October and what to wait on until later.
Blog · Roundups · 2 days ago
The Best Electronics Deals
From TVs to turntables and smartphones to Switches, there's a grand plethora of electronics deals to pick from, so we've narrowed it down to five of the best to help you choose. The results will shock you! (Hopefully not from faulty wiring.)
Blog · Buying Guides · 2 days ago
Need Your Smartphone Repaired? When to Fix Your Phone and When to Replace It
If your phone is in need of some TLC, the good news is you have options! Check out when to repair your smartphone and when you should just buy a new one, and how Batteries Plus can help.
Blog · Buying Guides · 2 days ago
Apple Black Friday 2021: What Deals Can You Expect on Your Favorite Devices?
Apple items are known for being high-quality, but also for having high prices. Want to save on Apple around Black Friday 2021? It should be a great time to get deals on your favorite i-products, as long as you know where to shop.

It's under list and the lowest price we could find. For further comparison, you would pay $53 or more for a similar unit elsewhere. Buy Now at Amazon

It's the best price we could find by $5. Buy Now at Ace Hardware

That's a savings of $70 off the list price. Buy Now at Nike