A svelte laptop will never go out of style, and while many consider Apple's current-generation MacBook Air the pinnacle of ultraportables, new models are starting to encroach on Apple's territory. The latest contender is the Samsung NP900X3A laptop. But does this Windows newcomer have what it takes to topple Apple? 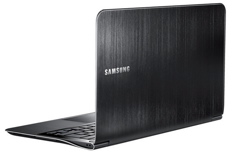 Under the hood, the NP900X3A houses Intel's latest Sandy Bridge 1.4GHz Core i5 2537M processor. While we applaud Samsung for choosing one of the latest Intel CPUs, we're disappointed that it chose the slowest of the new breed. Nevertheless, the processor is more than capable of standing on its own and it gracefully outperforms the Air's two-generations-old Intel Core 2 Duo processor by a score of 7,593 to 5,701, according to PC Mag's PCMark Vantage lab tests. Even with upgrades, Apple's top-of-the-line Air is limited to a Core 2 Duo processor. (To Apple's defense, the Core i5 2537M was not available at the time of the Air's release.)

As far as connectivity, Apple's first-generation MacBook Air was slammed for skimping on I/O ports. This time around, Apple fitted its Air with two USB ports, an SD card slot, a Mini DisplayPort and a headphone mini-jack. Samsung tops that by adding a mini HDMI port, one USB 3.0 port, and an Ethernet port to the mix, but it also substitutes the SD card slot for a less popular microSD card slot. The Samsung's ports are also difficult to get to as they are accessed via two flip-down doors on either side of the laptop. 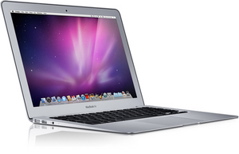 Despite its use of newer technology, we ultimately give our nod of approval to the 13" MacBook Air. Not because its more powerful, but because compared to the NP900X3A, the Air looks downright affordable.

Sure, the NP900X3A will eventually be discounted too, but for now, it commands too high a price for what amounts to a modest increase in performance over the current-gen 13" MacBook Air.


An avid gadget lover, Louis Ramirez has covered technology for Gizmodo, CNET, Laptop, and various other publications. Follow him on Twitter — @LouisRamirez. You can also sign up for an email alert for all dealnews features.
DealNews may be compensated by companies mentioned in this article. Please note that, although prices sometimes fluctuate or expire unexpectedly, all products and deals mentioned in this feature were available at the lowest total price we could find at the time of publication (unless otherwise specified).

Dealhunter89
Windows 7 OS has been great and as far as critics go they too agree its a great OS. The problem with windows vs mac is that apple is the only company aloud to make computers with OSX installed. Windows is installed on many different hardware companies, some do a great job, and others do very poor. Therefor people's experiences are so much different. There is a standard set when making apple computers so everyone knows what to expect buying one. With Windows, some will be amazing, others tragic. Windows has struggled but my personal opinion is they are far from out of the game in software with PC and cell phone technology. I think windows 7 phones are going to take off when Nokia begins to release them which will promote Zune marketplace which I am a big fan of. People don't want to pay 1.29 for a song. Ownership for media is becoming a thing of the past look at Netflix taking over so quickly. It just takes time to adjust people's ideas on those kinds of concepts. I am not saying all of my predictions are accurate they are hunches and I don't think will catch on for 3 to 5 years because Mac still has a strong hold on things. Look out for Google though...Chrome computers coming and android is looking strong...this could really hurt apple.
April 15, 2011

gkcmilner
I don't like your poll. The question should be "Which is a better value?" or "which would you buy?".

With the price disparity it's not fare to the Apple to ask which is better since you can tell from the specs the Samsung is better. But I would rather buy the Apple because it's so much cheaper. Plus I prefer the higher resolution display and and superior graphics card. I also agree that the standard SD card slot is much better than a micro SD slot since I always pop the card out of my camera and right into my computer to view, download, and edit pictures. The C2D processor combined with the nvidia is still a pretty powerful combo for most any application.

sambanh73
I agree that apple hardware and price are not the best, except for the recent batch of macbook pros. but you know what, b/c of jobs high demand, their os and design unmatched. you get so much productivity out of mac osx, it is not funny. windows is losing grounds from every direction and can't come up with a successful product anymore. as a matter of fact, when did they ever really come up with a successful product? never. everything built was either a stolen idea, outright bought, or copied. my future mac computers will be bought from their refurbs.
April 14, 2011

iam_f159
Agree! And I guess it depends on what you gonna do with it as well. For what I have to do on daily basis...Apple products won't do at all except iPhone and iPad...
April 13, 2011

jobelle20
the MacBook Air isn't due for a refresh for another several months, the Samsung Series 9 may be the most portable, thinnest and lightest laptop option right now.
April 13, 2011

Dafus
Three years of AppleCare adds $250 to the price. AppleCare, however, is widely viewed as the best in the business; it provides both phone advice and cost-free repair for three years. I consider it to be vital, and a part of the price of Apple computers. (AppleCare for Desktops is less expensive.)
April 13, 2011

Dafus
It would certainly make a more fair comparison if you included the option that boosts the Air to GB ram. That adds $100 to the price, and makes the machine far more attractive to my eyes.
April 13, 2011

Dealhunter89
Apple products are heavily overrated. I have owned iMacs, Macbook Pros, and Macbook Airs. They are reliable, very sleek, and have nice displays/keyboards/trackpads. But things like ram, memory, processor speeds, and video cards are always behind pc computers of equal or often times less cost price. So for this comparison when looking at the samsung if you were to strictly judge the performance of the two side by side the Samsung wins in a landslide ( I have done the test). When multitasking, downloading heavy content, and just over all sleekness samsung series 9 wins every day, with regards to the display you cant see much of a difference although the pro is indeed superior there. But it is frustrating when I read these reviews because when comparing mac and pc rarely if ever does pc get any wins over mac even though the pcs being compared are often priced much lower. Apple is a great brand with regards to simplisity, looks, and reliability, but when you are factoring power, storage, and multitasking PC will win every time when you compare two models of the same price point. An example below

People think macs cant get viruses=not true. Less likely yes. Get free avg virus protection with pc and your fine though. Apple is a brand that is trendy and people want just because it is a status symbol not because they make better products than PC.

So logically if you are looking to spend less and get more, its pc every day of the week.

VIEW ALL
Blog · Roundups · 1 day ago
The Best Patio Furniture Deals
From dining sets to fire pits to clearance sales, let the experts at DealNews guide you to the best discount patio furniture available today.
Blog · Morning Jolt · 1 day ago
5 Deals You Need to Know Today: Save $30 On the Brand New iPad
The iPad's newest iteration has a preorder price-drop celebration, so with no undue hesitation let's see this fun Friday temptation. Check out this offer and more in our roundup of the five best deals we found over the last 24 hours.
Blog · Roundups · 2 days ago
The Best Smart Home Deals
Whether it's a smart assistant, a security hub, a smart lighting setup, or one of the many other home automations on offer, these are our picks for the best smart home deals available right now.
Blog · Roundups · 4 days ago
Affordable Gaming Laptops
If you're looking for our current list of the finest gaming laptops at the finest available prices, welcome. There's deals aplenty on high end laptops and more budget conscious options as well as some associated accessories that might enhance your overall laptop gaming experience.
Blog · Roundups · 5 days ago
The Best Tool Deals
We've rounded up the best deals on tools, accessories, combo kits and more – from beginners to hobbyists to pro-am and beyond, look no further for your cheap tool needs.

Clip the on-page $2 off coupon and apply code "F9SDJROJ" to save a total of $25 off the list price. Buy Now at Amazon

Clip the $3 off on page coupon and apply code "H7G8LIGZ" to get $3 under our mention from two weeks ago and save $28. Buy Now at Amazon

Apply coupon code "6UIW5UTE" for a savings of $12. Buy Now at Amazon