How Streaming The Super Bowl Will Be Different This Year

For the first time last year, the Super Bowl was legally streamed live online. According to NBC, 2.1 million people logged in to check out the game on their laptops. Of course 111.3 million people watched the game on TV, but more than two million tech-savvy viewers is nothing to sneeze about. In fact, there must be some merit to it, as this year CBS (which has the rights to broadcast the game) is also going to stream the match live. 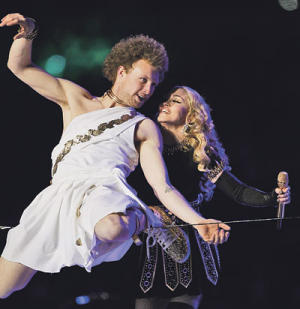 Last year's stream wasn't all cookies and cream, though, as the 'net had several complaints to make about how the game's streaming was handled. First and foremost (and oddly enough), most people complained about the lack of commercials. At any other time of the year viewers complain about commercials, but on Super Bowl Sunday, black becomes white and we all crave ads. Last year when going into a break, the NBC live stream cut to a plain logo with a note that regular programming would resume shortly.

The second complaint was that the same "blackout" treatment was given to the half-time show. We assume that NBC did not secure the rights to Madonna (or maybe that be-afro'd slack-line dancer?) and their only alternative was a blank screen. So, essentially, the only two things that non-sports fans would tune into the Bowl for were removed from the game.

Oddly enough, when most people complain about last year's stream, their third place problem was with game's streaming quality. In several cases, viewers complained about the video not being true HD, being "muddy" at times, and even dropping out all together, although that last complaint seems to have been rare. By all reports we could find, these experiences happened mostly at the start of the game and after half-time, so it was probably a result of a huge influx of new streamers tuning in all at once. (Possibly lookie-loos who just wanted to check it out and who then dropped out, thereby freeing up bandwidth for the remaining viewers.)

Improvements for Streaming in 2013

This year, it sounds as though CBS is seeking to rectify last year's complaints and is taking steps to make sure this year's stream is even better than last. Firstly, CBS has guaranteed that viewers will be able to see the commercials. Not only that, the network will also make the ads available as individual clips once they've aired live, so that media fiends can link to them and share them via social networking. (Like, "Hey guys! Check out this commercial that we all just watched live!" #Tweet) CBS has also secured the rights to stream the half-time show; Beyoncé fans everywhere can relax. (Or "throw their hands up at me." Either or.)

Of course, CBS is also keeping all the additional functionality that NBC offered last year. Watching online will give viewers access to DVR functions, stats, extra camera angles, and more. Unfortunately, the one thing that CBS has not mentioned is if it has completely ironed out the streaming wrinkles that would ensure everyone sees the game in flawless HD with no drop-outs.

Get Set for Streaming in Advance

All you have to do to enjoy watching the game online is have a browser with the latest Flash Player installed. Pro tip: It's best to install this update now and get it working, rather than leave it to the last minute and risk something going wrong and missing part of the game because a plug-in isn't installing correctly. For a full list of CBS's online video requirements click here.

Of course, just like last year, TV and online streaming won't be your only options to catch the Super Bowl ... if you're a Verizon customer. Verizon customers who have a smartphone or tablet that can run the NFL Mobile app (available for both Android and iOS) can stream the game, too. Verizon has not announced that it has made any upgrades to the service since last year, so viewers will likely get exactly what they got last time: Access to the live stream, alternate camera angles, and stats. (Again with the stats? Well, it is a fact that four out of five people prefer twice as many statistics as half the people do the other 90% of the time!)

As it was with Super Bowl XLVI, with so many ways to watch, there should be no excuse for anyone to miss the Super Bowl ... unless you just don't like sports. So, how are you going to watch, this year? Tell us all about your party plans, in the comments below! GO [INSERT TEAM NAME]!

Jeff Somogyi is the dealnews Media Editor. He giggles uncontrollably at the mention of a "tight end." Thus, he has never been invited to any Super Bowl parties. See more of his personal fouls on Google+, Twitter, or on his blog.

Blog · Consumer News · 19 hrs ago
Consumer Buying Behavior in 2021: How Have Shoppers Changed?
The world drastically changed in 2020, and shoppers are more cautious now. Check out our predictions for consumer buying behavior in 2021.

Blog · Buying Guides · 19 hrs ago
Everything You Need to Know to Buy Refurbished Electronics
Electronics are pricey, which is why refurbished models can be such great deals. Check out our in-depth guide to buying refurbished electronics, which has smart shopping tips and the discounts you can get on smartphones, iPads, and computers.

Blog · Morning Jolt · 21 hrs ago
5 Deals You Need to Know Today: Huge Savings on Men's Coats at Nordstrom Rack
Hundreds of men's coats are discounted up to 91% at Nordstrom Rack today. Check out this offer and more in our roundup of the five best deals we found over the last 24 hours.

Apply coupon code "CNZ3TCNW" to save 50% off. Buy Now at Amazon

Save on shoes, hoodies, activewear, and accessories. Shop Now at DTLR|Villa

Most retailers charge $40 or more. Buy Now at Olympia Sports

That's the best price we could find by $148. Buy Now at Costco

Use coupon code "SPRING" to save $401 with the lowest price we've seen. Buy Now at BuyDig