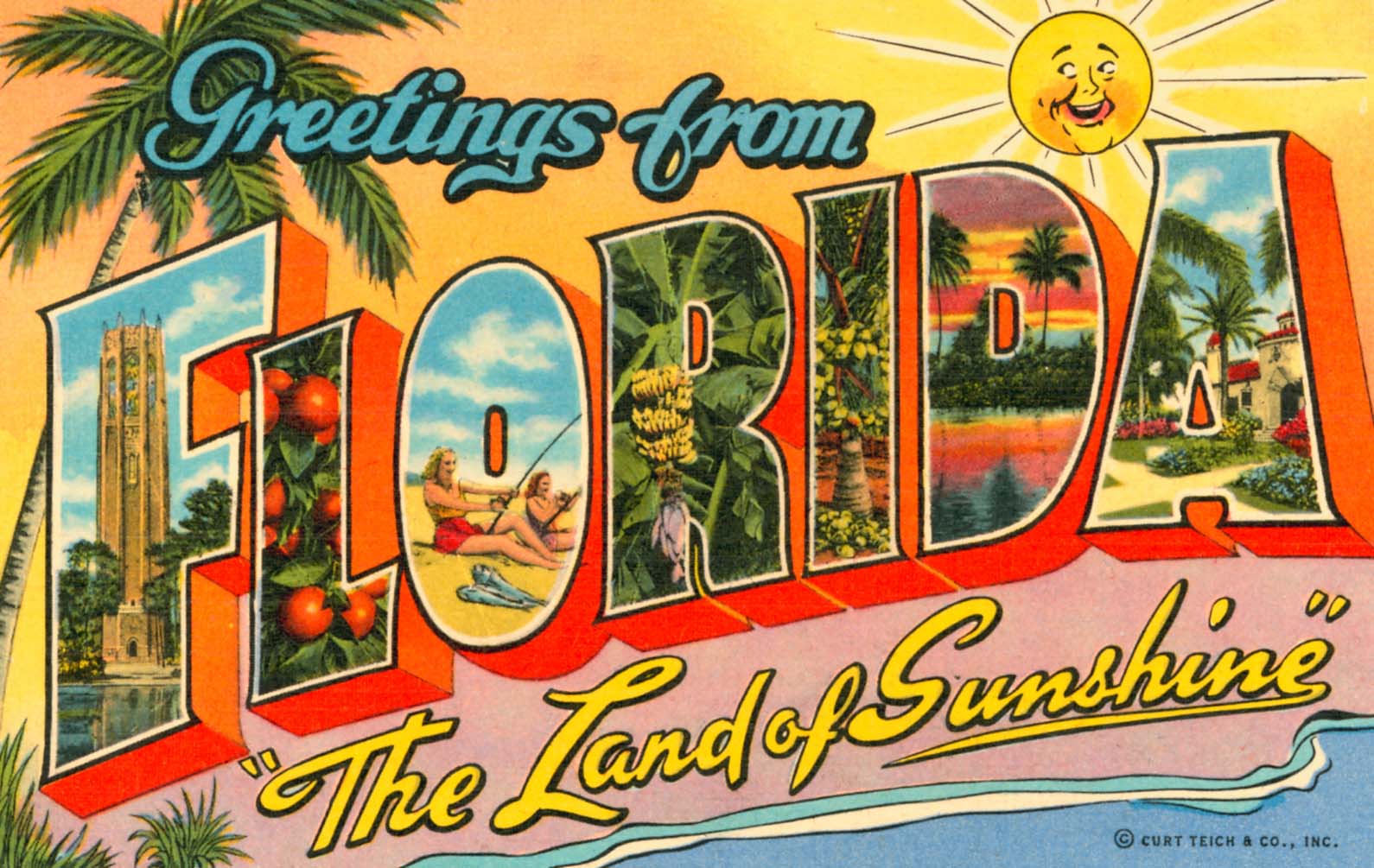 As if the winter blahs weren't already bad enough around this time of year, the recent Polar Vortex has most of us looking for relief from bitterly cold temperatures. If you're still not impressed with the current temperature spike that's making the mercury rise above zero or — gasp! — to the double digits, then check out these deals to sunny Florida. We hear the white groundcover there is sand, and the only shovel you'll need is a plastic one to build a sand castle.

Getting to Florida By Air

Depending on where you live in the country, you'll likely want to make your trip down south easier by hopping aboard a plane, rather than driving. Pack your bags and book a flight on United Airlines, which is offering discounted roundtrip flights to Florida (from $158, a low by $10; expires February 2). This sale offers the third-lowest rate we've seen from United to Florida, so you'll have more money to spend on accommodations and entertainment.

Where to Stay: From Daytona to the Keys

Make a break for the Florida Keys and take advantage of stays for two at the Hawks Cay Resort (from $119, a low by $139; expires January 31) on Duck Key, halfway between Miami and Key West. A small island surrounded by aquamarine waters, it's an ideal spot to snorkel and fish, or simply relax by one of the five pools or the saltwater lagoon.

Looking for a more activity-filled vacation? Consider a 3-night stay for two at the Liki Tiki Village (from $177, a low by $25; expires January 31) bundled with complimentary parking at the lowest rate we've ever seen for this hotel. Located near Kissimmee and Orlando, you're just a short drive from theme parks and attractions, including Walt Disney World Resort, Universal Orlando, Gatorland, and Kennedy Space Center. Back at Liki Tiki, enjoy the water park, tennis courts, and mini-golf course.

For a laid-back beach vacation with a metropolitan flair, look to Daytona Beach. Just an hour away from Orlando, enjoy beachfront accommodations, water sports, shopping, and nightlife. Opt for a 3-night stay for two at the Plaza Ocean Club (from $148.89, a low by $65; expires January 31). Not only is this the lowest rate we've ever seen for this hotel, but it also comes bundled with complimentary in-room WiFi and two complimentary cocktails. Overlooking the Atlantic Ocean, the hotel also offers an oceanfront pool where you can soak up the sun. It's also a short trip to Daytona Lagoon Waterpark and the shops and entertainment options of Ocean Walk Village.

For more waterfront lodging, consider a 3-night stay for two at the Daytona Beach Oceanside Inn (from $179.91, a low by $2; expires January 31) at the lowest price we've seen in the past 12 months. Plus, your stay also includes complimentary daily breakfast, free parking, and WiFi. Once you satisfy a need for speed at the Daytona International Speedway or take in a round of golf at one of the area's top-level courses, take a dip in the hotel's freshwater, heated pool and enjoy a drink from the tiki bar.

On the other side of the peninsula, on the Gulf of Mexico, is Clearwater, offering warm waters and white sand beaches. Check out stays for two at Shephards Beach Resort (from $80.55, a low by $37; expires January 31). Shephard's Backyard Tiki Bar & Margarita Grill draws crowds for its reggae and rock bands and bikini contests. For a more relaxed vibe, check out the Sunset Lounge, before dancing at the Wave nightclub. And, of course, there's beach access so you can relax under an umbrella, take a swim in the warm gulf waters, or watch for dolphins.

Things to Do: Miami Is Hot for Entertainment Deals

If your Florida vacation takes you to the Orlando or Tampa area, then take advantage of this single adult day ticket to LEGOLAND (from $62, a low by $7; expires December 31). Check out the ticket deals for other family members, and enjoy the park's roller coasters, live shows, and the new LEGO World of Chima, featuring an interactive water ride.

Planning a stay in Miami? Then don't miss a variety of activity and ticket deals for everyone from the kiteboarder to the foodie to the symphony-lover. Take a sailing trip on Biscayne Bay for two ($95, a low by $50; expires February 28) aboard the state-of-the-art 40-foot Quitasueño vessel, or, if you prefer to be more adventurous, opt for a 1-hour kiteboarding lesson in Miami ($49, a low by $50; expires April 22). This includes gear and one-on-one attention from a kiteboarding expert.

Miami is a popular foodie destination, for everything from its Cuban-influenced cuisine to fresh seafood to vegan and raw fare. If your travel plans put you in town on February 8, then take advantage of this deal on general admission to the Palette Miami Food Festival (from $20, a low by $20; expires February 8). Truly get a taste of Miami at this inaugural event, featuring food from top-rated local vendors, beer tastings, live local music, street performers, and more.

Those in Miami the following weekend can check out this deal on admission to the Miami Symphony Orchestra (from $10, a low by $10; expires February 16). Seating for "A Valentine Fiesta" is assigned on a first-come, first-served basis; the concert is held at Gusman Concert Hall at the University of Miami on February 15 and at New World Center on February 16.

Take in as many of the city's attractions and tours as possible with the 1-day Go Miami Card ($59.99, a low by $5; expires March 31). The card allows access to the Miami Seaquarium, Duck Tours, the Vizcaya Museum & Gardens, and more. If you feel as if you need more time, check out the other passes, valid for up to 7 days.

Always wanted to race but not interested in a Justin Bieber-style arrest? Go for a NASCAR ridealong ($64, a low by $76; expires November 15) from Mario Andretti Racing Experience & NASCAR Racing Experience. Reach top speeds as a professional driving instructor takes you in a two-seater for three laps. Or put yourself in the driver's seat and take a 5-minute NASCAR drive ($199, a low by $201; expires November 15). The three-hour experience includes a meeting with the crew chief, training, racing equipment and in-car radio communication with your spotter. After your timed racing session, you'll get a graduate certificate noting your top speed and a souvenir racing license.

If you want to sample the legendary Miami Beach nightlife, then a VIP ticket to World Crawl Miami ($39, a low by $51; expires May 29) will get you past the velvet ropes and into the hottest clubs like Hyde, Mansion, and Cameo. Start off your night with appetizers at a hotspot like Congress Hotel Rooftop Bar or Arena Lounge, and enjoy complimentary drinks at select venues.

We hope we've inspired you to take a winter getaway to the sunshine state. But if you have another destination in mind, be sure to have a look at our weekly roundup of the best travel deals for additional discounted flights, hotels, and vacation packages.

Blog · Morning Jolt · 2 days ago
5 Deals You Need to Know Today: Sweet Savings on Old Navy Activewear
It's important to know your history, but it's even more important to know how to save an extra 20% on Old Navy activewear. Check out this offer, some tangentially-related history, and more in our roundup of the five best deals we found over the last 24 hours.

Blog · Roundups · 2 days ago
The Best Patio Furniture Deals
From dining sets to fire pits to clearance sales, let the experts at DealNews guide you to the best discount patio furniture available today.

Blog · Roundups · 3 days ago
The Best Smart Home Deals
Whether it's a smart assistant, a security hub, a smart lighting setup, or one of the many other home automations on offer, these are our picks for the best smart home deals available right now.

Blog · Marketplace · 3 days ago
The 10 Best Items to Sell Online in August 2021
What does the end of summer mean for Marketplace sellers? We examined DealNews shopping trends from last August, so you'll know what to sell in August 2021.

Use coupon code "SHOE10" to save $4 off list. Buy Now at Shoebacca

You'd pay at least $12 from most third-party sellers. Buy Now at Amazon

It's $4 under our mention from ten days ago, $240 off list, and the lowest price we've seen. Buy Now at Wayfair

New
Nordstrom Rack · 3 hrs ago
Frye Shoes, Apparel, and Accessories at Nordstrom Rack
up to 87% off
free shipping w/ $89

Save on a wide range of Frye women's belts, handbags, wallets, boots, and more. Shop Now at Nordstrom Rack

That's the lowest price we could find by $175. Buy Now at Sam's Club