ESPN Will Soon Be Available to Stream Online, Without a Cable Subscription, for $20 a Month 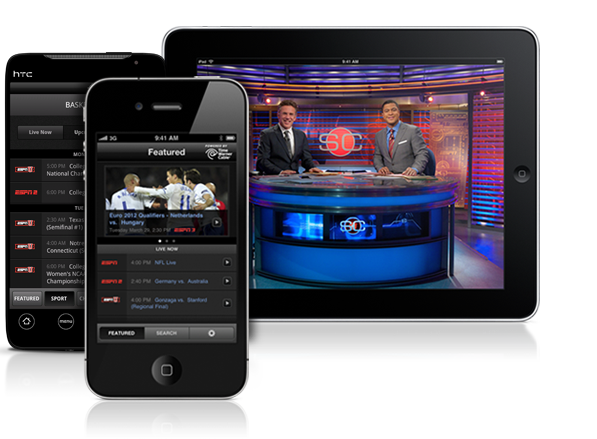 Dish Network announced an Internet-based streaming service this week, and the big news is that it includes access to ESPN. But the $20-a-month price tag could push user's streaming fees closer to cable levels anyway.

According to Re/code, Dish's Sling TV will allow subscribers to stream content from ESPN, as well as CNN, Food Network, and the Travel Channel, to computers, tablets, and phones. It will also support some streaming devices for television, like Amazon Fire TV, Roku, and select smart TVs, but notably, not Apple TV. No release date has been announced, although Dish stated it should be available in the first quarter of 2015.

Overcoming a Big Hurdle to Cord-Cutting

Just this past summer, we cited live sports broadcasts as one of the top obstacles to cutting the cable cord. (Note that ESPN has a free app for streaming, but users must also have cable subscriptions.) At the time, our own Marcy Bonebright noted that the pro sports leagues generally sell streaming subscriptions for out-of-market broadcasts, but that does nothing for those who want to watch home games without cable; she went as far as to call sports "the Achilles heel for cord-cutters."

But with Sling TV and ESPN, cord-cutters may turn this Achilles heel into... whatever the opposite is. Hercules' elbow?

The Numbers Might Not Add Up Yet... But Are Close

In the same article, we noted that cutting cable might not necessarily save you big bucks, depending on how much you pay to replace it. Re/code points out that with a Netflix and Hulu Plus subscription and paying for broadband, Sling TV could push your streaming services to $50 — and that's not counting the one-time costs of a digital antenna (to pick up local broadcast stations) and a streaming device (varies, from $35 for a Google Chromecast to $400 for a gaming console with streaming capabilities, or even more for a smart TV). Also, don't forget the recently-announced Internet-only HBO package, which does not yet have a price point.

For some, that will all add up to streaming subscriptions equal to or even more expensive than a basic cable subscription with HBO ($30 a month at TimeWarner). For others, especially those who would still pay for broadband, Netflix, and other services while subscribing to cable, Sling may be the chance to cut out some of the fat.

Price isn't the only thing to consider when paying for a subscription. Re/code points out that Sling will only work for one user at a time, so there will be no sharing passwords or watching one thing on TV and another on a tablet in the next room. Also, users might find the quality of streaming live events lacking or even failed, as providers still struggle with this new technology.

What do you think, reader? Will you buy Sling and then finally cut the cable cord? Let us know in the comments below.

Lindsay Sakraida (DealNews)
@jmackinac Deleted it for you, sorry about that!
January 8, 2015

jmackinac
REVISED: (and why can't I delete my errant comment) If I can get basic satellite for about $50 per month with a DVR, there is so much MORE than the $20 package mentioned here. C'mon...CNN?...Travel Channel?. I know, it's just a start, but I wouldn't do this deal unless it had a better channel, like FX.
January 8, 2015

nimer
Nice. For me this + Netflix + My HDTV antenna (and cheap USB DVR), I think I have more than enough.

Those who like HBO shows will soon be able to get a streaming-only version of HBO.

pmurray63
I'm with Tim -- drop ESPN and cut the price and maybe I'll be interested. Sports channel fees are the most expensive channels on cable ... and you can't get a cable package without them (other than the antenna replacement packages). I'd like to see a Federal antitrust investigation of networks that force cable companies to carry all their channels. But I'm not holding my breath.
January 7, 2015

Greg the Gruesome
ConsumerReports.org points out that cable companies, which won't like this new competition, are currently free to throttle the Sling TV stream to their customers who get their Internet access from them.
January 7, 2015

Klockness
I'm interested. I don't pay for Netflix or Hulu although we watch free hulu and other online shows from time to time. I get decent OTA but really miss college football especially bowls which ESPN has a near monopoly on. There is no cable provider in my area and I won't pay or sign a contract for satellite. I have wireless ISP that just finally got speed high enough for online streaming. I'm sure I'm a minority but this is perfect for me especially since I don't have to sign a contract and could only get it for football season.
January 6, 2015

Lindsay Sakraida (DealNews)
@kburlz I agree though, I still come out ahead, but that's because I'm not, at the moment, trying to grab at everything. I moved to a new apartment where they don't already have cable, so I did Netflix and Hulu Plus. I'd like to keep it at that, but I'll be curious about the ESPN option... if that allows you to log into ESPN Go in addition to watching standard live ESPN, I might do it. (I'm a tennis nut.)
January 6, 2015

Lindsay Sakraida (DealNews)
@kburlz We were trying to present a potential scenario... obviously you might not want all of these, and many people don't need to make those initial investments in a new streaming device, TV, etc.
January 6, 2015

kburlz
The article seems to assume that if you get Sling TV, you must also get Hulu, Netflix, Amazon, and hbo streaming. The point is that cable is a huge price, $100 a month or more, and you'll never watch 90% of the stations. This and Netflix would probably be all the content I need to keep me entertained for a third of the price. I'll buy this on the launch date. I can't wait to "cut the cord!"
January 6, 2015

michael bonebright (DealNews)
Excellent step forward in cord-cutting tech, imho. I might even check it out!
January 6, 2015

Lindsay Sakraida (DealNews)
@TimKridel Thanks for making me chortle first thing in the AM.
January 6, 2015

Cilvre
i could care less for espn, however i will be trying this as it has 3 of the 6 channels we watch and would allow me to cut about 40 dollars off the cost of what we pay comcast now, and any money not going to comcast is a win for me. I hope they add on a small fee to have more than one stream for the few times my wife and I want to watch something different.
January 6, 2015

TimKridel
I would consider it if it didn't include ESPN.
January 6, 2015

Kyser_Soze
I won't buy the streaming service but my hope is that some competition will encourage my local cable monopoly to change their pricing structure. Without competition, they have created a basic package with local channels, shopping channels and god channels for cheap. If you want to watch anything else, the price quadruples!
January 6, 2015

pinehollow11
Poor comparison to basic cable. $30 price is 1st year, try and find out what the regular price is from TWC (good luck). Channels are HBO,local and TBS plus shopping. Standard cable is closer but $40 for first year only.
January 6, 2015

Clip the on-page coupon and apply code "QWT543FQ" to save $50. Buy Now at Amazon