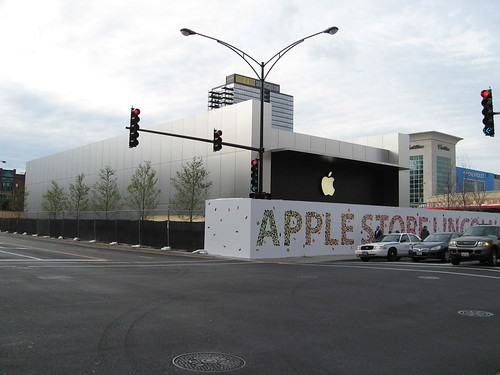 When the newest Apple Store opened in Chicago's Lincoln Park neighborhood in October, we might just have come upon one true positive economic indicator to signal the end of penny-pinching and recessionary thinking. It's been a while since we've thought about shopping as something more than how to get what we need for the lowest possible price, but as retail sales start to turn up, so too, do some tried and true tricks from retailers to get people in the door. Hence, the rebirth of "Retail-tainment," that throw-back to the jubilant 90s when malls and stores were supposed to become entertainment centers where consumers would happily drop tons of money while they were otherwise distracted.

With its newest location in Chicago, Apple has not just built a retail outlet that sponsors lectures, events and other attention-getters, but also lets this excitement spill over to the public space next door. The company actually "sponsored" or contributed to the renovation of the Chicago Transit Authority's "El" stop at North and Clybourn avenues. Here, the train stops underground, and the dingy, decaying station was badly in need of an upgrade but desperately short on funding.

Enter Apple: The retailer has built a brand new store on the site of a former gas station and invested $4 million in the renovation of the transit stop, including a public plaza with seating and a fountain. Apple ads are the only ones in the station itself and its presence is so profound that locals are already calling this the Apple Station, the true definition of destination shopping.

Back a decade or two ago, retail-tainment was the big thing in shopping. Retailers started to use music, scent, food and lighting to make a shopping environment more appealing. It was common to see cafes in all kinds of unexpected stores or find DJ's spinning records for no apparent reason. It was an effort to create excitement and infuse a store with lots of positive, upbeat energy. Some of these tricks aren't obvious, but nevertheless make consumers eager to buy, or at the very least, come back again soon.

The American Girl stores do this to great success by including a restaurant, doll hair salon and portrait studio. The entertainment component at Disney Stores is built in, Toys R Us lets kids play, eat ice cream (at the Times Square location) and try out video games, and Best Buy's music listening stations and game displays. But as capital dried up, giant malls lost tenants and all hype value. Today's version of the trend is mostly about shopping malls turning to stores like Gameworks and Legoland Discovery Centers, along with movie theaters and bowling lanes as mall tenants.

But some new players are trying to keep up with Apple's hip reputation and market lead. Microsoft is opening its own stores, for one. Barbie's newest house is a six-story emporium in Shanghai. And Disney is opening a new flagship store in New York's Times Square next week sure to be a perfect representation of retail-tainment at its best. It is also, ironically enough, located in a former Virgin Megastore, the last of that once great chain to close and an original player in the rise of retail-tainment.


Laura Heller is a freelance writer based in Chicago who specializes in mass market retail trends and consumer electronics industries. You can follow her on Twitter @lfheller. You can also sign up for an email alert for all dealnews features.