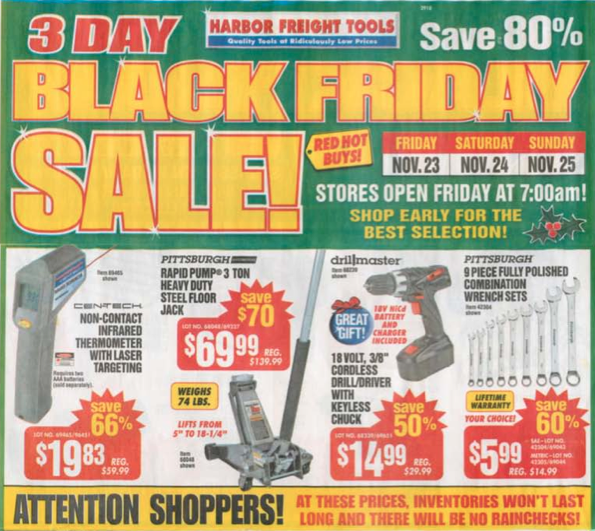 Black Friday is among the busiest shopping days of the year, so it's no surprise to see stores leaking their ads early in an attempt to generate buzz. Here at dealnews our editors are tirelessly taking every Black Friday ad we come across and dissecting it for all to see, exposing the bad deals from the good, and in the process letting you know which sales are worth your time.

Today, we cross-examine the 2012 Harbor Freight Tools Black Friday ad. And as it turns out, there are some notable deals contained within the yet-to-be-official ad. In fact, many items are less than last Black Friday. Here are some of the highlights:

Hard as we tried, it was virtually impossible to stump Harbor Freights' leaked Black Friday ad. Many of the tool and hardware deals are at (or very close to) all-time low prices, while several also beat last year's Black Friday prices. The ad is perhaps not as enthralling as, say, a 47" HDTV for $299, but this is one Black Friday sale that lives up to the hype.

Keep an eye on all the Black Friday ads as they trickle in by visiting our Black Friday hub. We've already posted ads from Fred's, Half Price Books, and Sprint.