JetBlue often comes across as the most customer-friendly airline of them all. While other carriers hit you with fees for this or that, JetBlue hits you with free WiFi and Doritos.

In their pursuit of perks that add value to the customer's experience, JetBlue recently installed four free MetroNaps EnergyPods "nap chairs" in their terminal at John F. Kennedy International Airport in New York City, NY. In fact, though these kinds of chairs have appeared in airports internationally, JetBlue is the first to try them out in the US.

If you're like us at DealNews, you might have heard about these pods and thought, "Are they worth my time?" We tried to sleep on the job to find out! 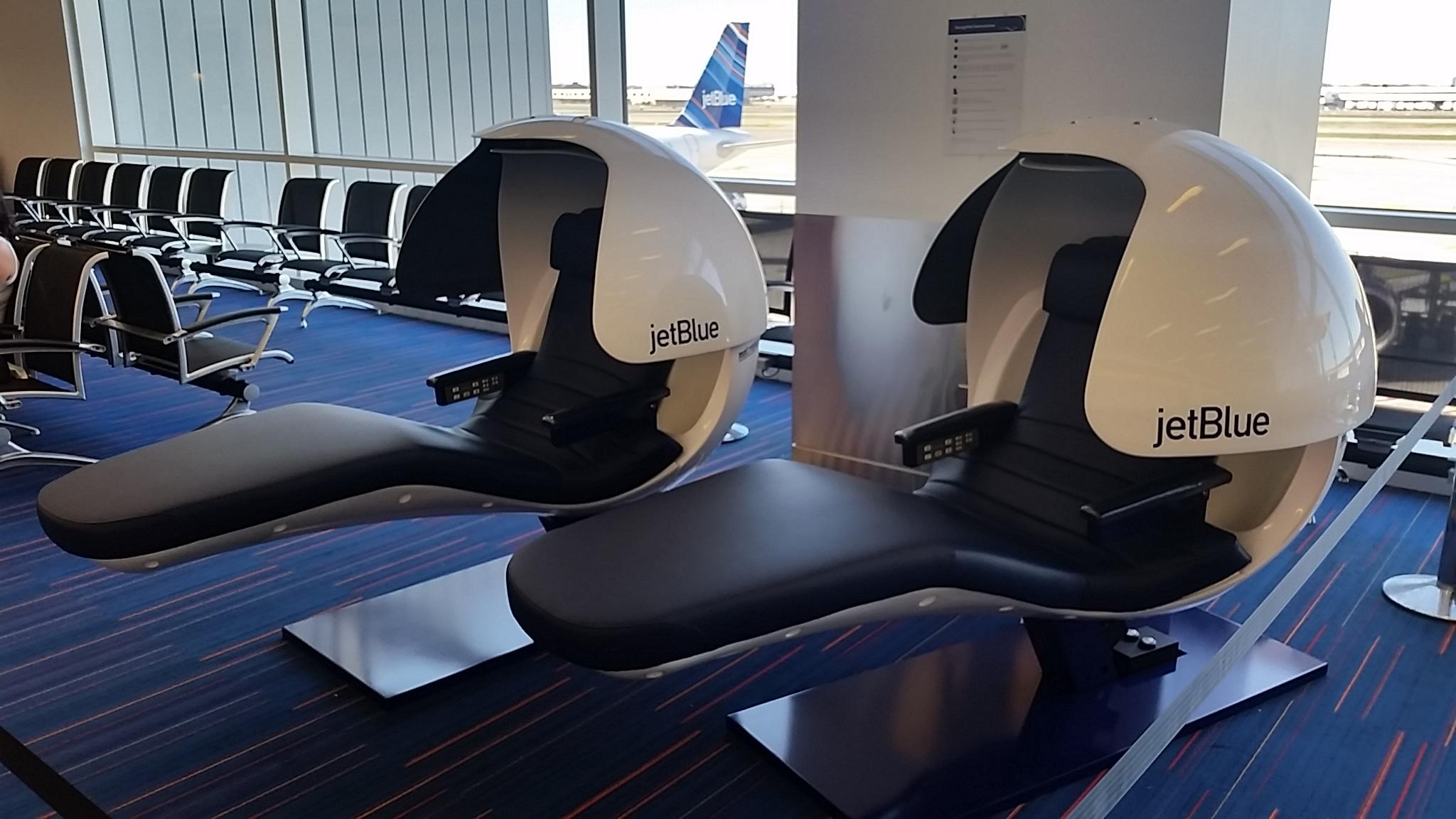 It's a Space Age Alarm Chair

It looks like something out of a sci-fi movie; close the dome to get a bit more darkness and privacy, and you get something that looks more like a spaceship command chair. Adjust the recline angle and you'll even feel like you're prepping for takeoff.

The point of the chair isn't to live out your childhood astronaut fantasies, but to facilitate napping for weary travelers. Each unit has a nap timer, and if you press the i20 button, the chair starts a sequence of music designed to put you to sleep, keep you there for a time, and then gently wake you up after 20 minutes has passed.

The (unenforced) 20-minute limit isn't just a great way to encourage user turnover, but it's also based on science that says 20 minutes is the perfect amount of time for a refreshing nap. Don't have 20 minutes until your flight leaves? You can adjust the timer down to as little as three minutes. But if your flight is leaving in less than three minutes, you might not want to consider a nap at all. 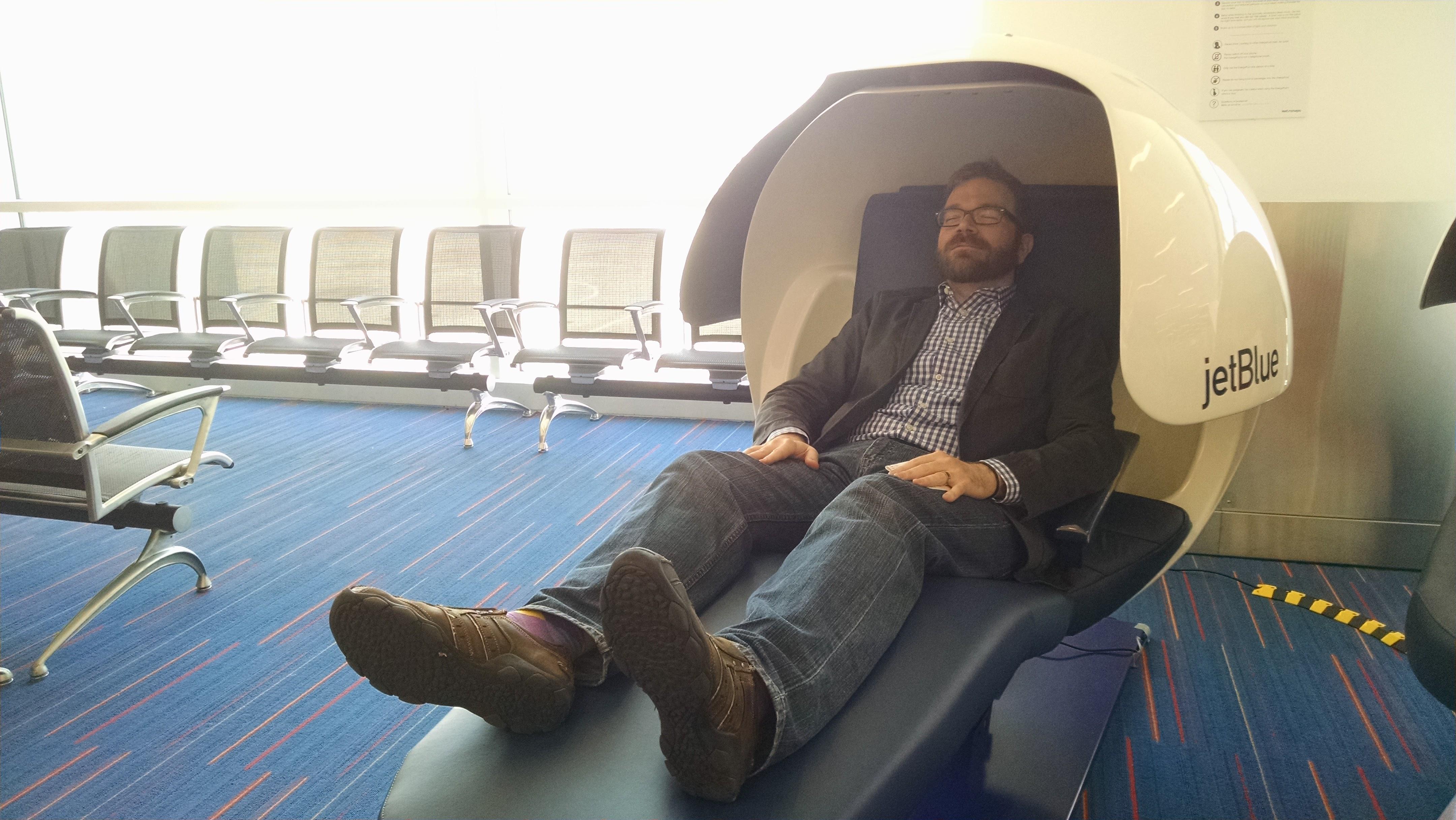 I Put My Butt on It

Sliding into the EnergyPod felt like getting into a dentist's chair, except slightly more squishy — albeit like something I might actually be able to sleep in.

Sliding into the EnergyPod felt like getting into a dentist's chair, except slightly more squishy.

Closing the domed hood (which rotates around from behind the chair), I noticed there was a slightly strange smell. I chalked it up to either that "new pod smell," the last occupant's hair product, or the cleaning solution the terminal uses. Since these pods are cleaned once a day (on the same schedule as the rest of the terminal), I chose to believe it was the last option ... but then I noticed the rather large stain on the dome. 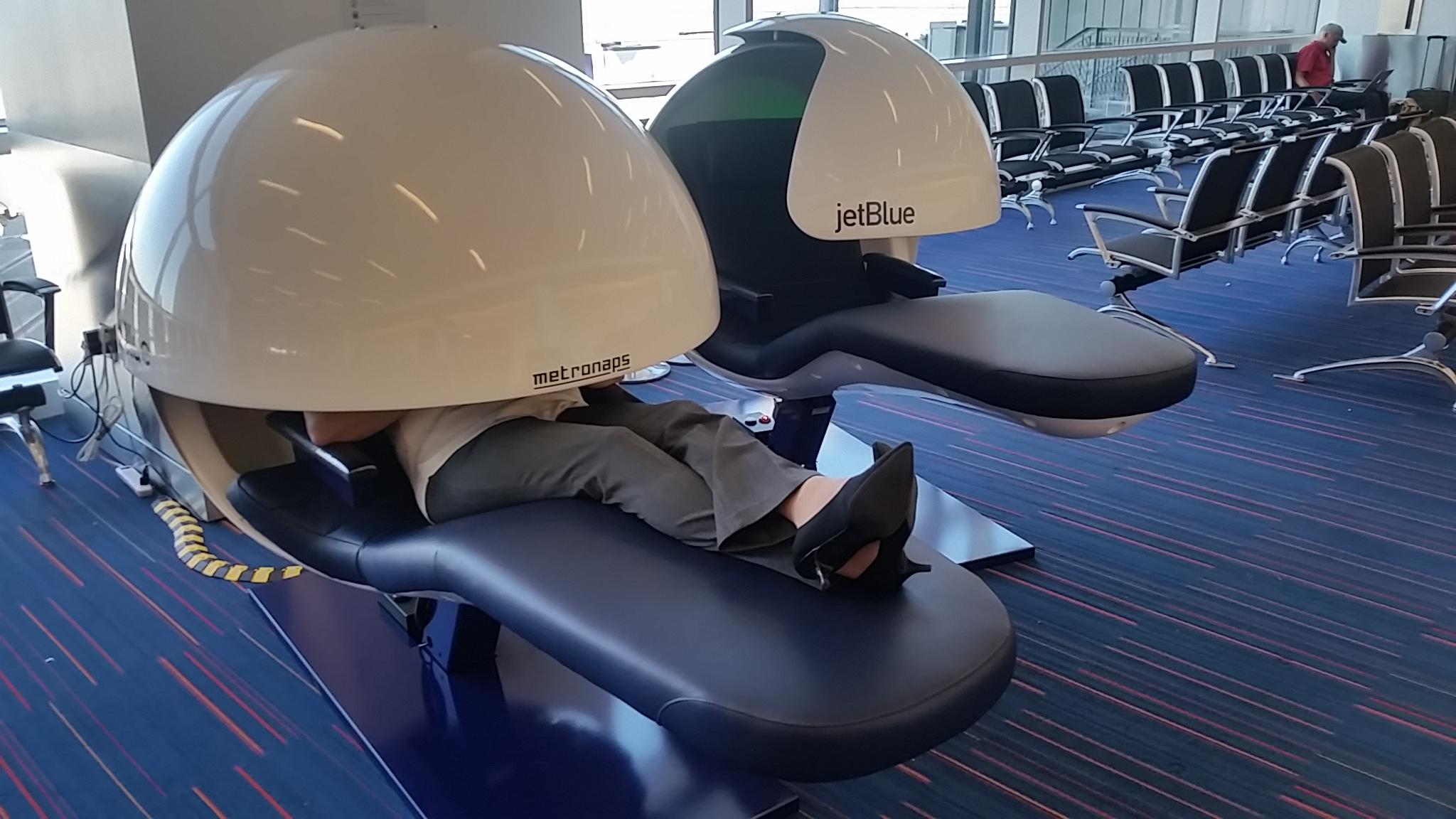 Stuffy, But Not as Germy as You'd Think

As an admitted germophobe, the smear-of-indeterminate nature grossed me out. Then I remembered that, though I wasn't flying anywhere, I was still in an airport. As my JetBlue guide pointed out, "You're traveling. There's germs!" Of course she's right. We shouldn't judge these nap pods against the sterile dentist's chairs they resemble, but against other chairs in the terminal that are also vulnerable to people's grossness.

Stains or no, if you choose to keep the lid/dome closed, you'll encounter the biggest design flaw about the chair: it gets stuffy in there pretty quickly. I only had the dome closed for a couple minutes before it started getting noticeably warm. There are no vents or air ducts piping in fresh air, so without any circulation, you're stuck with your own exhales and body heat.

Unlike my germophobia, this problem wasn't just a personal peeve. A man seated in another pod also closed his chair's dome, only to quickly reopen it, complaining about how hot it had gotten in there. An alternate reason for the temperature rise may be location-based, as the pods were installed next to the big, floor-to-ceiling windows of the terminal, where the sun can hit them directly. Maybe avoid a stuffy nap by flying at night?

As I sat, contemplating the chair I was sitting in (something I don't do nearly enough, I realized), I thought about security. Who'd look after my roll-on luggage, laptop, and/or sweet leather jacket, while I snoozed? The answer is simple: The same person looking after those items if I fell asleep in a regular terminal chair. That is, no one.

It was at this point that I realized MetroNaps and JetBlue are not trying to facilitate a "safe space" for you to let go of all of your cares, but just a comfortable seat. The EnergyPod is no more safe (or less dirty) than the other terminal chairs; it's just a reclined seat that offers you a bit of darkness.

The EnergyPod is no more safe (or less dirty) than the other terminal chairs; it's just a reclined seat that offers you a bit of darkness.

Speaking of being under the hood, even with the lid closed, I was still able to hear the P.A. announcements made in the terminal, as well as the conversation of a couple sitting nearby. This was a good thing. Though a more soundproofed hood could lead to a better nap, I never once felt like the chair would prevent me from hearing gate change announcements or important flight information. Of course, being asleep might cause me to miss something, but that's not the chair's fault. 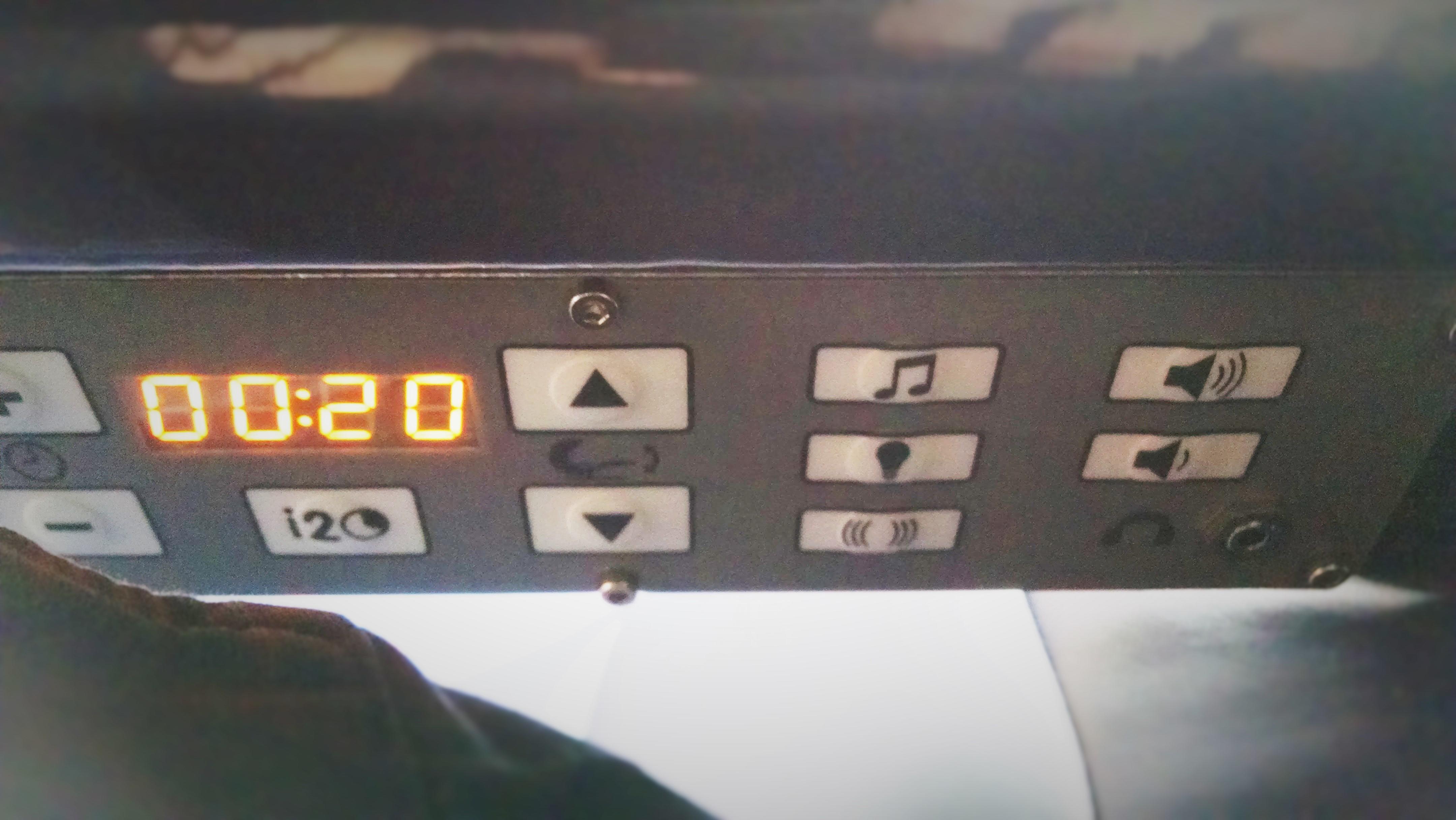 The second-nicest feature of the chair (the first being its comfy design) is the built-in wake-up timer. And by "built-in," I mean the whole chair is the alarm. One minute before your time is up, the chair will attempt to wake you by turning on a soft purple light, vibrating, and playing a special music track. The chair will also automatically return to a more upright position, too.

Full disclosure: I did not actually manage to fall asleep at the time (it's hard to nap with a JetBlue PR rep watching you). However, after experiencing the pod's wake-up regiment firsthand, I can say it would definitely get me up — especially since I'd be napping in an airport, not at home in my bed.

Is This Just a Popular Gimmick?

While it's easy to dismiss these pods as a gimmick, they're also drawing the attention of travelers. In fact, when I showed up for my hands-on (body-in?) review, both pods were already occupied. However, the people keeping me from carrying out my difficult task of napping for the sake of this report were not, themselves, napping. One pod was taken up by a lady working on her laptop, the other by a man who admitted he just needed to get away from his family for awhile. He was playing on his phone.

That they were in use is a big win for JetBlue, but it highlights the issue that there's nobody to police the turnover of these chairs. If someone (like me) really wants a nap, but a kid is sitting in it reading a comic book, there's nothing I can do about it. There's no mechanism in place to kick him out after 20 minutes so I can have my turn.

When the very awake laptop lady got up to catch her flight, I realized something. Ultimately, what will limit a person's time in these chairs is the fact that they're not just there to hang out (like I was), but they have a plane to catch. As such, this is a slightly self-regulating system.

The MetroNaps EnergyPods, with their reclined position and cushy softness, are certainly the most comfortable chairs in the entire terminal. Being able to put your feet up and relax is a very attractive proposition; it's just a shame there are only four of them installed.

The biggest detriment to using one is they quickly get stuffy when the privacy dome is closed. Overall, they're a nice amenity for JetBlue to offer (for free!) to tired travelers. I wish other airlines would follow suit and install these chairs in their terminals, but those other carriers would probably just charge you an extra fee to use them, right?

Readers, would you use a nap pod to pass the time on a layover? Or do you never want to fall asleep in an airport? Let us know in the comments below!

frenchyaz
I tried the pods and they are great. I didn't fell asleep however I was able to rest for 20 min while being in a noisy environment (Interop Las Vegas).
May 8, 2016

MWFplus3
Great idea, but I would be too paranoid about someone stealing my stuff to be able to doze off peacefully. Too bad about there only being two within the terminal...I can see how frustrating it would be to never get a turn in one, even if only to relax for a while.
May 5, 2016

nimer
CDG airport in Paris (mainly terminal 2E) has incredible loungers (without the pod part), they look great, surprisingly comfortable, and I admit I caught a good hour nap on one of them. The thing was, I didn't have a roller, only had my iPad bag so I basically hugged it and fell asleep on it :-)
May 5, 2016

VIEW ALL
Blog · Buying Guides · 6 hrs ago
What's the Best Time to Buy Big-Ticket Items?
Savvy shoppers are always on the lookout for a great deal, and to help you out, we've put together guides on the best times to buy big-ticket items.
Blog · Morning Jolt · 7 hrs ago
5 Deals You Need to Know Today: The Macy's Ultimate Shopping Event Extravaganza
Macy's has arrived with its self-proclaimed Ultimate Shopping Event just in time for the weekend. Check out this offer and more in our roundup of the five best deals we found over the last 24 hours.
Blog · Buying Guides · 1 day ago
Ask an Expert: When Can I Expect a Price Drop on the TV I Want?
Do you have a question for us experts here at DealNews? If so, submit it and we might just answer it in a future column! Until then, check out our first column, which offers advice to a cost-conscious TV shopper.
Blog · Buying Guides · 1 day ago
59 LGBTQ-Owned Businesses You Can Support This Year
June is Pride Month, so if you're looking for a spate of LGBTQ-owned businesses to support with your wallet, we've got you covered! Check out our guide for 59 shops to check out now, as well as tips on how to find more.
Blog · Buying Guides · 4 days ago
The 9 Best Things to Buy in June (And 4 Things to Buy Later)
While June may be a prime time for vacations, it's also a great time to find excellent deals. Check out our guide for what to buy in June and what you should hold off on until later in the year.

Clip the 32% off on-page coupon and apply code "IVQDBCHN" for a savings of $90. Buy Now at Amazon

Coupon code "MAY20" bags extra savings on over 80 styles already marked up to half off. Shop Now at adidas

Apply coupon code "BGUSMA048" for a savings of $280 off list and $30 under our mention from two weeks ago. Buy Now at Banggood