After an 18-month run, Target is pulling the plug on its little-known video-on-demand service, Target Ticket.
BY:
LOUIS RAMIREZ
DealNews Contributing Writer 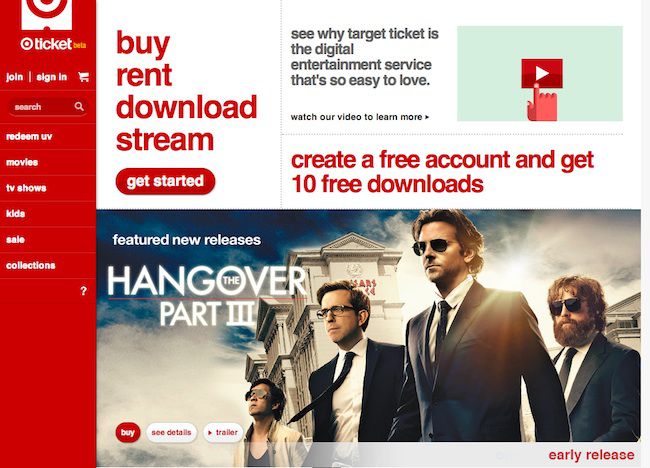 Target Ticket received its pink slip this week and chances are you're to blame. Launched by Target in September of 2013, the little-known video-on-demand service failed to gain traction with consumers, and as a result the mega-retailer recently announced it would shut its service's virtual doors on March 7.

Despite the rise in the number of cord cutters, the market for streaming services is extremely competitive and currently dominated by veterans like Netflix, Hulu, Amazon, and iTunes. Traditional operators like Dish Network have also taken note of the cable-cutting trend and recently started introducing video-on-demand services of their own such as Dish Network's Sling TV, a $20-per-month streaming service that includes ESPN.

However, Target Ticket never stood a chance against the competition. Dubbed by Target as the "the digital entertainment service that's so easy to love," the service was not as easy to find. Target never aggressively marketed the service, which offered more than 30,000 titles for rent or purchase, despite it being available on a number of devices like the Xbox, various Roku boxes, and on the Web. Simply put, not enough cord cutters made it their go-to service. In terms of content, a quick look at the site reveals a healthy number of new releases such as the Oscar-nominated Birdman, Guardians of the Galaxy, and recent TV shows like Jane the Virgin.

According to Target, customers who created digital libraries with Target Ticket will be able to access their content via CinemaNow starting on March 7. Users will be able to sign into the new service using their existing Target Ticket log-in. Target has created a lengthy FAQ with further membership and account questions.

Will you miss Target Ticket? Were you even aware it existed? Let us know in the comments below.

esdbag
Y'all never heard of it because it was terrible. I signed up to access my free UltraViolet season of Justified mentioned on DN several months ago. After spending 10 minutes trying to navigate this poorly designed site, I opened a vudu.com (Walmart) account instead and was watching my show in 5 minutes.
February 16, 2015

coreymatthew
There were endcaps, large signs, dedicated space in weekly ads, headers on the website, stickers on movies, etc for the full 18 months. It was heavily promoted in the store, in the weekly ads, and on the website. Just nothing about it stood out since it used the same logo as the store.

Empressbren
I must be the one user of the this service... for some reason I had the sign in and ended up with digital copies of the movies the ex took in the divorce.... have to make sure those movies transfer, I am NOT rebuying them. :)
February 12, 2015

Aggie12
Heard of it on dealnews a couple months ago for a free movie rental. It was pretty convenient that one time I used it.
February 12, 2015

designjb
Yep heard of it. There was no differentiation between it and all of the other services out there, imo...
February 12, 2015

hptn
They need to fire their marketing team.
February 12, 2015

zuma
I shop at the Target stores 3x a week (it is on a walk I do every day) and have never heard of this service. I am also on their website a lot, check dealnew.com, and I am really gotten into media players and streaming in the last 3 years. Wonder why they did not want anyone to know that they offered a streaming service?

jsmithrulez2
Never heard of this - and I am a Digital Marketer for a living.

What the HECK, Target?!?! Closing this down and not even telling us it existed? So uncool, I just barfed and need to wash my shirt.

Time to look for good deals on detergent on Dealnews!
February 12, 2015

December27
This is the first I'm hearing about it, and I'm on Target's mailing list. I wonder why they kept it such a secret?
February 12, 2015

VIEW ALL
Blog · Buying Guides · 2 days ago
What's the Best Time to Buy Big-Ticket Items?
Savvy shoppers are always on the lookout for a great deal, and to help you out, we've put together guides on the best times to buy big-ticket items.
Blog · Morning Jolt · 2 days ago
5 Deals You Need to Know Today: The Macy's Ultimate Shopping Event Extravaganza
Macy's has arrived with its self-proclaimed Ultimate Shopping Event just in time for the weekend. Check out this offer and more in our roundup of the five best deals we found over the last 24 hours.
Blog · Buying Guides · 4 days ago
Ask an Expert: When Can I Expect a Price Drop on the TV I Want?
Do you have a question for us experts here at DealNews? If so, submit it and we might just answer it in a future column! Until then, check out our first column, which offers advice to a cost-conscious TV shopper.
Blog · Buying Guides · 4 days ago
59 LGBTQ-Owned Businesses You Can Support This Year
June is Pride Month, so if you're looking for a spate of LGBTQ-owned businesses to support with your wallet, we've got you covered! Check out our guide for 59 shops to check out now, as well as tips on how to find more.
Blog · Buying Guides · 6 days ago
The 9 Best Things to Buy in June (And 4 Things to Buy Later)
While June may be a prime time for vacations, it's also a great time to find excellent deals. Check out our guide for what to buy in June and what you should hold off on until later in the year.