Point of No Returns? Stores Are Tracking Your Returned Merchandise History 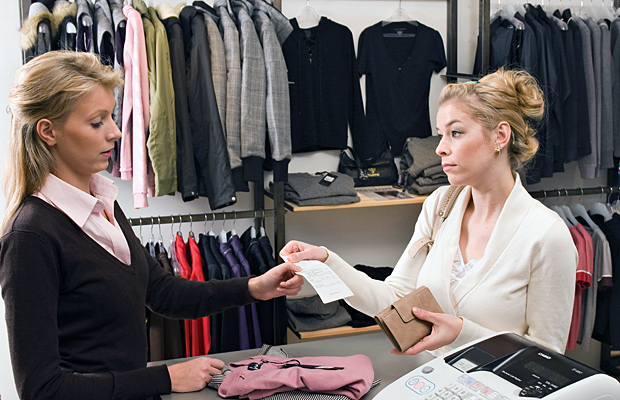 The government is monitoring your phone calls; social networks and phone service providers are selling your data; and retailers are tracking your movement through stores using the WiFi signals from your smartphone. And now, the latest privacy concern centers around stores tracking returns.

According to a recent Associated Press article, retailers such as Best Buy, J.C. Penney, Victoria's Secret, Bath & Body Works, Home Depot, and Nike collect data from merchandise returns and use an outside company to create a "return profile," or a history of customers' returns, in an effort to battle return fraud.

If you've ever had to provide a photo ID to do a product return, a company like The Retail Equation is likely tracking you. The Retail Equation has created return profiles for more than 27,000 stores. Your name, address, date of birth, and ID expiration date are kept on file, along with a copy of your original sales receipt.

The company then analyzes the data: frequency of returns, return dollar amounts, purchase history, and whether the merchandise return is accompanied by a receipt. In about 1% of cases, The Retail Equation notifies a store of suspicious activity and possible return fraud; the store can then reject a customer's returns for a period of time. Fortunately, the Retail Equation doesn't share specific customer returns data amongst retailers, so Home Depot doesn't know you've returned sweatpants at Victoria's Secret. In an effort to remain transparent amongst modern day privacy concerns, the Retail Equation offers consumers a copy of their return activity report available by phone or email request.

Generating return profiles as a method of anti-fraud is a growing business. Consumers return about $264 billion worth of merchandise per year, according to industry estimates — about 9% of total sales. Of those merchandise returns, the National Retail Federation estimates that retailers lose $8.9 billion per year to return fraud, whether it be from "wardrobing" and "renting" (when shoppers buy items with the intention of returning them after use) or by larger schemes, such as counterfeit receipts, the return of stolen merchandise, or price switching.

According to Rich Mellor, National Retail Federation's VP of loss prevention, honest customers are even affected by return fraud as stores shorten return windows and limit items that can be returned in an attempt to prevent fraud. However, the Retail Equation says its services allow for more flexible return policies for the honest 99%.

While it's always wise to read the fine print before making a purchase, most consumers don't think about a company compiling their data while making a return. A Federal Trade Commission spokesperson told the Associated Press that many consumers aren't aware of return profiles and that most consumers believe that presenting an ID for a merchandise return is a way to ensure consumer protection. Ergo, a spokesperson for the U.S. Public Interest Research Group believes the practice of returns profiling is an invasion of privacy.

That precise indictment — and the grounds of a class action lawsuit — was thrown out of a federal appeals court earlier this year. A 2011 Florida lawsuit against Best Buy alleged that a customer who had his driver's license swiped during a merchandise return transaction was not aware of the "returns profile" policy until reviewing his receipt after making his initial purchase. According to a story in the Minneapolis Star Tribune, the court upheld an earlier ruling stating that the Drivers' Privacy Protection Act doesn't apply to information supplied by a customer.

However, as a result of legal action, Best Buy now posts its return fraud policies on notices at registers as well as on receipts. But there are other retailers, such as Victoria's Secret and Bath & Body Works, whose returns policies are still not transparent in-store. (The Victoria's Secret's website, however, does contain a disclosure.)

Perhaps most interesting is how these anti-fraud practices affect customers who unwittingly become labeled "suspicious." A Connecticut shopper took his story to The Hartford Courant in March 2012 after he was told he couldn't return a Blu-ray disc — or anything — to Best Buy for 90 days. The shopper says he'd made several returns after the holidays and a few more in the months leading up to returning the defective disc.

Though The Retail Equation's website states that it doesn't "blacklist" shoppers, it does permit retailers to request all merchandise returns for a specific shopper be denied. That said, in this digital age, we wonder if it's becoming normal to assume somebody's watching our every move. Readers, what do you think: Are these return profiles fair or an invasion of privacy? Let us know in the comments below.

nwmslaw
Why in God's name should I trust Best Buy and its employees with i) extensive biographical data from my license ii) in conjunction with my credit card information? So that Best Buy employees can commit identity theft? So that someone can hack the system and commit fraud? I just encountered this issue for the first time at Best Buy today after spending over $1000 at a store and wanting to upgrade one of the items. I will not be back. This policy needs to be posted in LARGE PRINT at the front of all of their stores.
December 22, 2013

DLiver420
With Amazon, Newegg, and a host of other options a mouse click away, why would anyone shop at Best Buy? I walk through there every now and again and every time, I look at the prices and think, "Do they have any idea how much this stuff costs on the internet?"
October 24, 2013

tjmasters
I hate giving my ID over so they can record my information and it's a factor in where I shop. I always review the return policy of stores and I will avoid stores like Best Buy and the other stores mentioned when am looking to make a purchase. If I have a receipt and the item that I am returning is not damaged or otherwise not in resalable condition then I don't want to give my ID over. If I don't have a receipt then I can understand the policy.
August 18, 2013

I'm guessing you'd have to exceed a certain number of returns per time period to activate a limiting restriction. The guy who goes back once in a while to return duplicate gifts would not reach this number and so it wouldn't affect him.

mikeb693
The problem here is the "one size fits all" approach. The guy returning the DVDs may have been simply returning sealed, unused DVDs that were received as gifts and duplicates, or simply found a better price elsewhere. That's a far cry from the consumer who returns clothing on a weekly basis. But it sounds like both are treated equally, clearly an unfair methodology. Returning merchandise that was very likely unused should not be subject to this tracking policy.
August 16, 2013