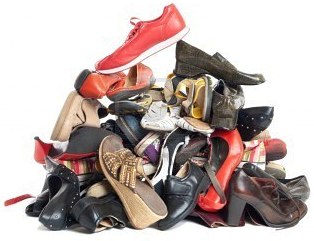 Every now and then, the dealnews writers encounter a second-hand T-shirt or other apparel item that's been labeled as "refurbished," usually on eBay or another resale site. And perhaps we're just too accustomed to assigning this condition to laptops and hard drives, because describing an article of clothing in this way tends to make us chuckle. But a recent feature from CNBC discusses the concept of refurbished shoes.

They've been deemed refurbished instead of plain old "used" because they've undergone "refinishing." According to CNBC, Nordstrom Rack (Nordstrom's chain of outlet stores) has begun carrying said footwear in select locations. A store representative indicated that these items are "gently worn (either tried on or accepted as returns) and then professionally cleaned, repaired, and refinished as needed to return to a 'near-pristine' condition." In many cases, the shoes have been sold alongside new merchandise.

Since these shoes are supposedly styles that were merely tried on or exchanged within Nordstrom's acceptable window for returns, they're not your local thrift store or consignment shop's scuffed and potentially odorous footwear. However, considering Nordstrom's reputation as a high-end retailer, several brand image consultants have suggested that the "refurbished" strategy is ill-advised. In the end though, it might not be an official merchandising policy at all, as CNBC suggests that select stores could be "going rogue" with the sales.

Either way, we want to know: how many of you would be willing to buy used shoes? Would you buy without blinking an eye, or would you need a sizable discount? And are you more likely to buy "new" shoes through Nordstrom as opposed to a thrift store?

thunderFence2
you can get that aid from used shoe
March 7, 2012

VIEW ALL
Blog · Roundups · 23 hrs ago
The Best Smart Home Deals
Whether it's a smart assistant, a security hub, a smart lighting setup, or one of the many other home automations on offer, these are our picks for the best smart home deals available right now.
Blog · Roundups · 2 days ago
Affordable Gaming Laptops
If you're looking for our current list of the finest gaming laptops at the finest available prices, welcome. There's deals aplenty on high end laptops and more budget conscious options as well as some associated accessories that might enhance your overall laptop gaming experience.
Blog · Roundups · 3 days ago
The Best Tool Deals
We've rounded up the best deals on tools, accessories, combo kits and more – from beginners to hobbyists to pro-am and beyond, look no further for your cheap tool needs.
Blog · Buying Guides · 4 days ago
88 Hispanic-Owned Businesses to Check Out
Hispanic Heritage Month is a time to support Latino-owned businesses, but our list is full of brands you can easily shop all year long. Check out our list of 88 Hispanic-owned businesses to patronize.
Blog · Roundups · 6 days ago
The Best Shoe Deals
The experts within Castle DealNews love nothing more than a strong discount on the biggest shoe brands, so keep your eyes affixed here for the best deals on Nike, adidas, New Balance, Birkenstock, and more.

That's a savings of $2 off list price. Buy Now at Amazon

That's a savings of $3 off list price. Buy Now at adidas

That's a savings of $562 off list price. Buy Now at Dell Technologies

The die cutting machine costs $13 more direct from Momenta, even without the 44-piece die bundle you get here. Buy Now at MorningSave