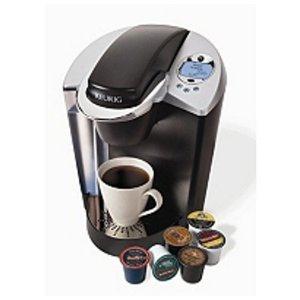 To say that Americans like their coffee would be an understatement the size (and calorie count) of a Starbucks Venti Mocha. Brew maven Carson Adley reports that coffee consumption in the U.S. is the eighth highest in the world, adding up to a massive $18 billion domestic coffee market. Just imagine how many lattes $18 billion could buy! (We did the math: 3.6 billion $5 lattes!)

In the quest for both convenience and connoisseur-quality java, many consumers have turned to Keurig and its K-Cup system, which offers more than 200 varieties of coffee, tea, hot cocoa, and specialty/iced beverages that can be brewed in mere minutes. It's such a popular system that other manufacturers now build similar machines to use K-Cups.

Now ease of use is a fabulous thing, and saving money on coffeeshop prices is even better. But when you break it all down, just how much money does a Keurig system save you? Or better yet, what does its use cost you throughout the course of a year, assuming you drink a cup of coffee each day? Here's what we found when we examined the cost of Keurig and its K-Cups, from machines to mochas.

The Machine
The Keurig B40 Elite Gourmet Single-Cup System boasts a 48-oz. water reservoir and two brewing volumes. The Keurig B130 Hotel Brewer, pictured above, is also perfectly sized for a single cup of coffee, and features a mug sensor and auto off, and brews an 8-oz. cup in just three minutes.

The Brew
Looking around, we typically see 24-packs of K-Cups for as low as $9 (although we briefly saw a 24-pack for just $5 last week, since expired). It's advisable to stock up on K-Cups when they hit this price point, although you may have a harder time finding the popular brands and flavors at this cost. In terms of name-brand deals, we've seen 24-packs go for as low as $13, as well as 48-packs for about $19. Office Depot sells 18-packs of many popular brands starting at just $11.99. And you can commonly find K-Cup coffee bundles that qualify for Subscribe & Save discounts at Amazon.

The Bottom Line
If you opt for the K-Cup system using the K-Cup refills from Office Depot, your total cost for the first year will come to about $331.12, or $0.91/day. Comparatively, a Tall (small) coffee at Starbucks (12 oz.) will run you $1.65 plus tax (but minus costs for cream and sugar, which are supplied gratis) or $602.25 per year.

While there's sizable savings in making your daily coffee via K-Cup, keep in mind that in order to attain a mid-range coffee strength, you'll probably want to brew an 8 oz. cup of Joe on the Keurig system. You're effectively paying less per ounce (11.4 cents per ounce of K-Cup coffee versus 13.8 cents for Starbucks drip coffee) then, but you're also brewing less coffee.

Something else to consider: the cost of K-cup convenience versus using good old fashioned coffee grounds and brewing your coffee in a traditional coffee maker. A study by WUSA-TV's Daniel Guzman shows that ground coffee costs just 3.7 cents per ounce, making it the most frugal option by far. For that price, we think you could spoil yourself week after week with the best coffee blends on the market, and still come out way ahead. But if the K-Cup's handiness and effortless brewing hold sway, at least you'll be better off financially than if you take your java to go at a chain coffee shop.

jputty989
There’s this product I found called Vaska (tp://www.vaskatech.com/[/) that says it can get you the best price for k-cups as well as a cool container system. I preordered one and it seems pretty cool
June 18, 2014

Meyer Cookware 50124 Yosemite Percolator, Stainless Steel, 8-Cup and Dunkin Donuts coffee, not the fastest though the best coffee in my opinion. I'll wake up 15 minutes before my alarm goes off if it means I can have percolator instead of K-cup coffee. K-cup = good and easy hot chocolate.

kevinarea
The K-cups work great for me for two reasons:
1. My wife and I used to brew a pot of coffee and would regularly waste half of it.  We tried making smaller pots, but getting the right proportions just didnt work out.
2. Often my wife and I wanted either different strength coffee or different flavored coffee, so making a pot was not practical.
Nothing, and I mean NOTHING, compares to the ease and convenience that the k-cups offer my wife and I.
Also, I am not sure how the energy costs compare.  But I remember leaving the brewed pot on the warmer for at least an hour before the timer would shut it off.
I am sorry, not everything can be broken down into cost, unless you can tell me what the cost of freedom and choice is.  I have the freedom to make a cup whenever I immediately want it and the choice to brew whatever strength and flavor I want.

kellmeister
The Kohl's link you provided for the B40 is no longer available. Just thought you might want to know.
February 24, 2012

unpaidintern
Yeah, I was thinking the same thing.
February 24, 2012

veazy1
Considering you need not stop and wait in line at a Starbucks, I feel in that respect the Keurig system is worth the investment. Buy your K-Cups in bulk at, say Costco or Sam's Club or Bed Bath & Beyond and you definitely come out ahead. Go with the B70 or B60 and set the timer to power on and off the brewer at your selected times and you will gain valuable time in the mornings. Best investment I have ever made. I have a small cabinet on the counter filled with a selection of different coffees (Including Starbucks K-Cups) so I am able to change up depending on my mood that morning.
February 24, 2012

I think the K-Cup is a great idea for doctor's offices.  When you are waiting in the waiting room (which wait time is usually from 15 mins to 45 mins.....), it's great to get a cup of coffee or tea.  Or even for meeting rooms in the office when you have clients to come by for a fresh cup of coffee.  However, for home use, the cheapest is still the traditional coffee.  And for my, personally, the taste is still the best.

Just my 2 cents. :D
BTW, Thank you for this article.  I always wonder if K-Cup is actually a cost effective in reality situation. :)
February 24, 2012

AllisonC
Its worth mentioning the My K-Cup that allows one to buy ground coffee or beans and use it with the brewer. This certainly would cut the cost and still give one the convenience of the Keurig system. Thanks for the article.
February 24, 2012

wilkinsk
How about a Nespresso machine vs lattes? I have had one in my amazon wish list for a while and heard only good things, but would like to know the price (dis)advantage over my current starbucks addiction.
February 24, 2012

dukellington
Great article!  Thanks for clearing that up.  I've heard a lot of conversations on whether the K-cup method actually saved.  One note though, the B40 brewing system does make a 10oz. cup, you only have it calculated at 8oz.  That would show a little more savings.
February 24, 2012

goodboysas
Best of both worlds... Buy ekobrew (http://www.amazon.com/...ers-1-Count/dp/B0051SU0OW) and the keurig and Starbucks coffee. Save money all over the place.
February 24, 2012

jrjajj
I received the Keurig for Christmas in 2010, and I love it. Yes I could make a pot of coffee and throw half away. We used to have 2 coffee pots, (my husband drinks decaf) and this has acutally saved us by we seem to drink less coffee using the Keurig. Yes the coffee is more, I happened across a website http://coffeecow.com. Use the coupons as new user for 20% off order and google for more ways to apply coupons. Spend $50 for free shipping and everytime you spend money, you get cow bucks applied to your next order. This always makes it less, I think a 24 pack will bring it down to $11.99.
February 24, 2012