Auto repairs can be expensive. But these minor fixes, like new valves or balanced tires, can help prevent more costly problems down the road.
BY:
TOM BARLOW
DealNews Contributing Writer 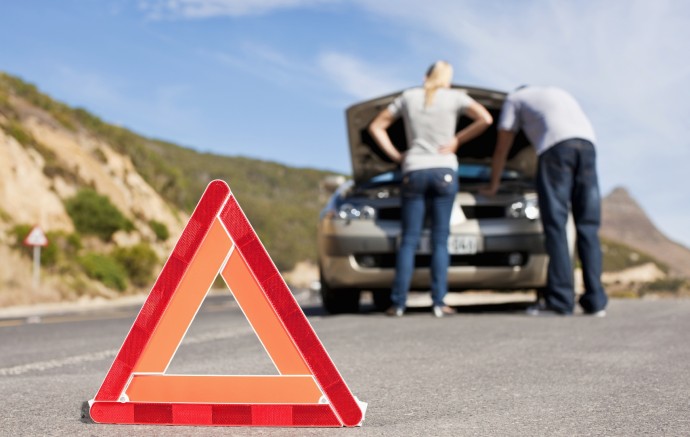 There you are, tooling down the Miracle Mile in the car of your dreams, letting the whole world drink in the spectacle that is the awesome you, when, BAM! A red warning light on the dash rains all over your parade. You wonder, as a typical human being, is this something I can ignore and perhaps it will go away? Is it really such a big deal?

Thankfully, the truth is that little red light often isn't all that dire; the whole idea behind the computerized problem detection systems built into new cars is to warn you before the problems require big and expensive fixes. There are also other sensory warnings that should clue you into the fact that something's wrong, like wheel shimmy or squealing brakes.

The little nuances can become bigger issues if you ignore them, though. So don't put a piece of duct tape over the red problem light; embrace it. Here are eight minor repairs that warrant your immediate attention, because the alternative is to pay big bucks in the near future to repair the damage that ignoring the little ones has caused. And while you're at it, be sure to search for automotive deals (like these coupons from Advance Auto Parts) that might make any DIY tasks easier to swallow budget-wise too.

The oxygen sensor in your car monitors your engine's, well, oxygen intake. It can determine if the engine is running too rich with too much gas in the engine or too lean with not enough gas in the mix. This sensor allows the engine's computer to adjust the fuel mixture for efficiency, and this sensor is the number one reason for your "check engine" light to come on.

To repair or replace your oxygen sensor will set you back $259.30, according to CarMD.com. This is a small price to pay in the world of car repairs today.

If you ignore or delay the oxygen sensor in your engine, your car could lose up to 40% of its gas mileage, and at $4 a gallon, that cost can add up quickly. Malfunction of this sensor can also cause power loss, make your vehicle slow to accelerate, and eventually foul your spark plugs and your catalytic converter. The price to replace a converter alone can reach $3,500 because precious metals are used in its construction: platinum, palladium, rhodium, even gold. You really don't want to replace your converter.

You catch a stone from a passing gravel truck and whoops — you have a very small, perhaps star-shaped ding in your windshield. It doesn't interfere with your vision, so what's the problem? The problem is that, once a small crack is made in the windshield, it threatens to grow and can race entirely across your windshield, obscuring your vision and ability to operate your vehicle safely.

SEE ALSO: Flat Tire? 7 Reasons Not to Repair It With Fix-a-Flat or Slime Tire Sealant

Luckily, there is a thriving window glass industry, where specialists can easily fix small cracks in a windshield using a transparent epoxy, usually for under $100. It can be done wherever your car is, too; there's no need to take it to the shop. And better news, many insurance companies will pay for the repair, rather than have you wait until you need an entire new windshield, which could cost upwards of $500 or more.

Spark plugs ignite the fuel mixture in the combustion chamber of your engine. When they become fouled or wear out, they no longer fire at the proper time or at all. This malfunction can cause your engine to idle roughly, hesitate, or surge. It can also result in lost power and acceleration. A blown spark plug can even result in raw gas being fed to the catalytic converter, which could cause it to fail prematurely. Spark plugs that are faulty can also result in your vehicle failing state pollution testing, bringing along all the hassles that entails.

A new set of spark plugs and spark plug wires will set you back a relatively low $361, according to CarMD.com; that's not much in light of the cost of a new converter and the waste of fuel.

If you've ever driven a car that made you feel like your were slithering down the road instead of coasting, you know what it feels like to have tires that are out of balance. This unpleasant sensation isn't the only downside to this condition, however. Unbalanced tires can cause uneven wear on your tires. And if you get a bald or flat tire, getting a new set for your favorite ride can easily reach $400 or more.

The shimmy can also put additional wear on your car's suspension system, eventually necessitating replacement of shocks and struts, which are way more costly than a simple tire balancing. Unbalanced tires also compromise your car's handling, which can result in having to repair dents in the bumpers or worse.

Replace the PCV Valve and Hose

As your car burns gasoline, some of the fumes escape around the cylinder and reach the crankcase. The PCV valve routes this gas back into the combustion system, where it can be burned to minimize pollution and maximize mileage. A faulty PCV valve allows pressure to build up in the crankcase and drives oil out through the seals and gaskets.

Replacement of the valve and hose costs an average of $135.78. The alternatives — in addition to dealing with oil leaks — is a motor that: idles roughly or even stalls; gets poorer gas mileage; accelerates sluggishly; and lacks proper power. Your PCV valve and hose can also affect the lifetime of your oil, causing it to become more viscous. This then becomes a threat to the really expensive parts of your engine, such as the cylinder walls.

The thermostat in your car senses the temperature of your engine, and when it gets hot, it signals the coolant to flow through your engine block. Your engine needs to run hot enough to efficiently burn fuel and keep oil flowing, but not so hot that it expands beyond expectations.

If you ignore your thermostat you run the risk of boiling off your coolant, blowing a cylinder head gasket, or even cracking a head. These are all pricey problems you really don't want to face.

The evaporative emissions system is part pollution control and part mileage maximizing. As gas naturally evaporates from your tank and fuel system, the EVAP prevents these vapors from escaping directly into the atmosphere. The hoses gather the vapors and routes them to a storage container and into the intake manifold while the engine is in engaged. There, these fumes are burned off.

Ignore the EVAP red light and you'll find your engine may hesitate, stall, idle roughly or rapidly, and lose mileage. The average $95.83 charge for replacing the hoses will quickly pay off in increased performance.

Your power train control module (PCM) — the computer at the heart of your engine's operation — adjusts the composition of air and gas that enters the combustion chamber depending on the temperature at which the engine is operating. The engine coolant temperature sensor is the device that tells the power train control module what the internal temperature of the engine is. The PCM then determines the ratio of the fuel mixture, advances or delays the spark, increases the cooling fan speed, and takes other steps to fine-tune operations. Replacing the ECT will set you back about $150.62.

If this sensor quits working properly, your PCM can assume that the engine is running cool and then enrich the fuel mixture unnecessarily, wasting gas and putting more stress on the catalytic converter. This could suck many dollars out of your wallet.

We'd all love to have a car that never needed any attention or maintenance beyond filling it with liquid gold. But the fact is that like any machine, your car will show signs of wear, and occasionally need some TLC to keep it running up to snuff. The trick is to tend to its needs early, while the problems are still small. And if you're lucky, you might just find an automotive deal that makes it all the easier to address.

LaryCook
Well, it is very that with rising gas prices and costly car repairs, the last thing one wants to worry about is having his car break down. So, I want to suggest some car maintenance tips which I think will help everyone to protect their investment in a car and take them from source to destination as reliably as possible.
1)Schedule the vehicle maintenance according to a user manual.
2)Drive with economic speed.
3)Chain the oil on a regular basis.
4)Check different fluid level minutely.
5)Flush the power steering fluid, brake fluid and coolant in every two years.
6)Monitor the thickness of the brake pad. Etc.
So, on a final note, I can say that proper maintenance not only keeps us remain safe while driving on the road but also boosts the overall performance of the car as well as increases the life span of a car.

Check engine lights can be indicative of a host of issues: EVAP purge valves/solenoids/canisters, EGR, MAF sensor, MAP sensor, catalytic converter, etc. There's no reason to think that O2 sensor replacement -- especially when cars can have three or more of them -- is some kind of silver bullet repair. Not even reading the actual diagnostic code with an OBD2 scanner is sufficient, since the code indicates a functional failure not a component failure. Maybe it's the component, maybe it's the wiring.

Spark plugs and wires? On cars built in the last 15-20 years, wires and plugs are good for a good 100k miles.

Thermostat? If it's working and not leaking, there's no need to change it. Sure, if you open the cooling system, pull it and at least test it, but a "this might help" fix? Dumb.

ECT? If it's dying, the check engine light will almost certainly come on, and you'll see a trend toward overheating.
August 25, 2015