7 Celebrities That Shop at Our Favorite Bargain Fashion Stores

You don't need to go broke to look like these A-list actors and socialites; they all shop at budget-friendly fast fashion stores!
BY:
LOU CARLOZO
DealNews Contributing Writer

It's true that celebrities and conspicuous consumption go together like Beyonce and the $80,000, diamond-encrusted Barbie Doll she bought for her daughter who isn't even potty trained. As such, it's no surprise that such flashy spending certainly spills over to the wardrobe department, where six-digit celeb shopping sprees certainly aren't unheard of these days.

Yet many actors and musicians still shop like they're living on ramen noodles and checking the help wanted ads. Chicago-based fashion expert Amy Tara Koch, says that "celebrities love a deal as much as the average shopper. The best of the fast fashion outlets are ASOS, Topshop, Zara, and Target." And these accessible clothiers are just the place for OK! and Us Weekly readers to find their fave celeb fashions for less, too! 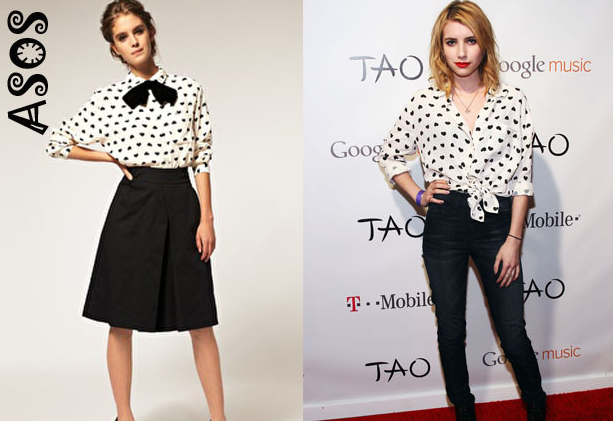 Primarily aimed at men and women ages 18 to 34, ASOS has become one of the UK's largest online-only fashion and beauty stores since its founding in 2000. The American .com has become a big hit with celebs, Koch says, including Emma Roberts. As the daughter of Oscar-nominated actor Eric Roberts and niece of Oscar-winning actress Julia Roberts, the former star of Nickelodeon's Unfabulous looks destined for a long career. Emma turns 23 on February 10, and if she celebrates with a little shopping, don't be surprised if she heads to ASOS. We found Roberts in New York sporting plenty of ASOS gear: a Petite Exclusive Jacket with Embellishment, Keyhole Sunglasses, and a Handcuff Ditsy Necklace. Those items are out of stock, but keep an eye out for the next Roberts spotting to see what she'll wear next from the ASOS racks. 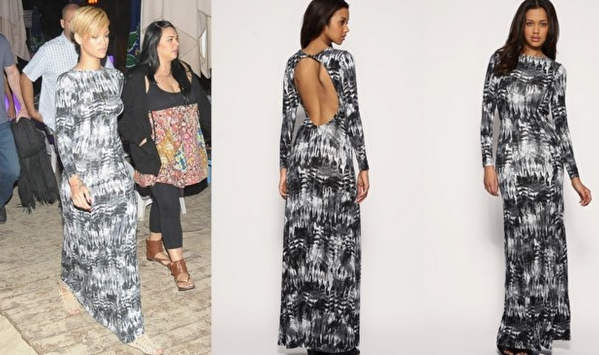 Who knew Rihanna was an ASOS fan, too? Also archived in the ASOS fashion finder alongside Alexa Chung and Zooey Deschanel, you can access some of Rihanna's looks. In all, ASOS has 41 celebrities on its fashion finder page, so check out the photos and shop to your heart's content. Links on the Rihanna page will take you to boyfriend jeans and a metallic top offered by the UK's Select Fashion, as well as items in the ASOS Marketplace. 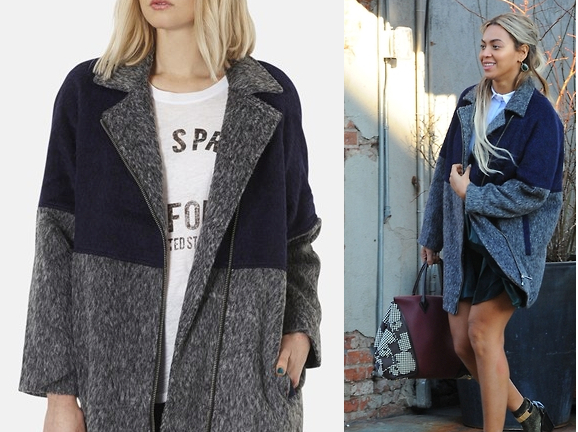 Celebrities, as we all know, are complicated people. So yes, the same woman who can buy her daughter a Barbie doll worth more than a Porsche can also sport a coat within reach of the average shopper. Koch tells us that Beyoncé is a Topshop fan and was spotted wearing a Topshop Two-Tone Textured Coat. The coat sold for $170, at least while it was available. It's currently out of stock at both Topshop and Nordstrom, which carries Topshop items. But we're guessing fans will find plenty of other Topshop items that Bey herself has sported. 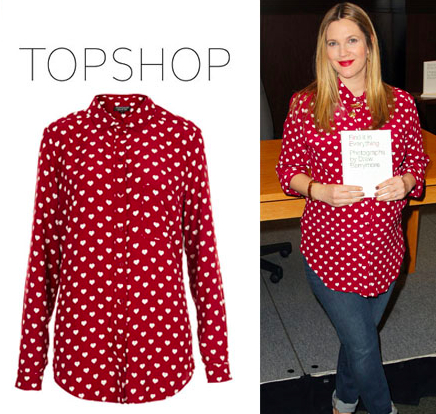 Drew Barrymore has been known to set many hearts aflutter, and recently she was spotted wearing Topshop's Heart Print Marocain Shirt for $76. And no wonder: Topshop's flagship store in London's Oxford Circus is a mecca for cool chicks. The chain traces its roots to 1964, and in addition to more than 300 stores in the United Kingdom, there are Topshop American flagships in Chicago and New York. 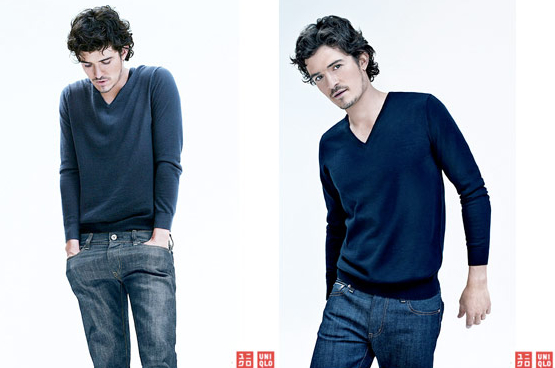 UNIQLO has certainly come a long way since opening up its first store in Hiroshima, Japan in 1984. Now the chain has stores in California, New York City, and northern New Jersey. And Orlando Bloom is a UNIQLO fan, Koch says. Back in 2010, the Pirates of the Carribbean star (who's an avid snowboarder) made a commercial for UNIQLO's Heattech line, and was also snapped in ads for the store's slim fit jeans, which cost $49.90. 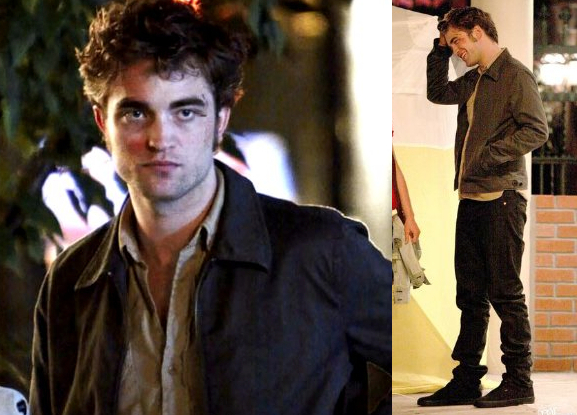 UNIQLO's ultra-light down jackets and vests are outrageously popular and range in price from $39.90 to $59.90. These nylon coats are affectionately known as "bubble jackets" or "puffer jackets" because of the puffed-up, horizontal partitions that line the body and sleeves. And they're a staple for Twilight star Robert Pattinson. Koch tells DealNews that he's been known to sport the jacket, in addition to other styles like the pictured option; "UNIQLO has a big celeb following," she adds. Pattinson also attended the launch party for UNIQLO's Oxford Street megastore in London. 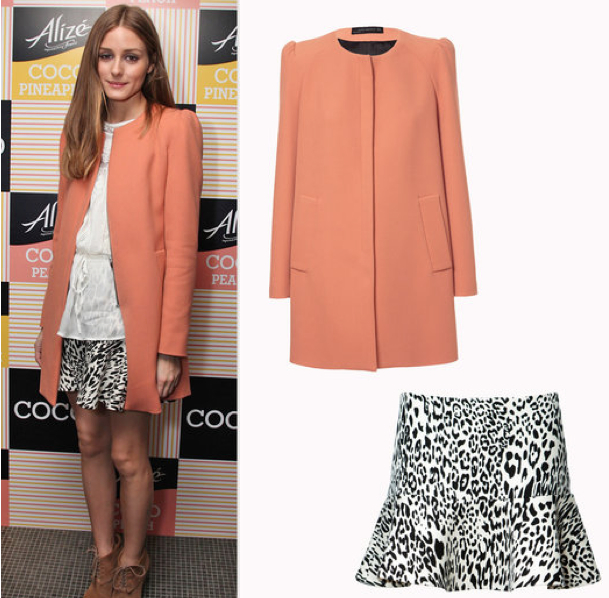 Does Olivia Palmero, socialite and "it girl" love Zara or what? Ms. Palmero has an entire page dedicated to Zara on her website. Garb from the Spanish clothier founded in 1975 stands amongst wares from Topshop, ASOS, J.Crew, and Tommy Hilfiger in her closet. Speaking of which, fans can shop her closet by clicking on the appropriate item and designer. Now that's classy: an "It" Girl helping other women in pursuit of their own affordable fashion It-ness.

True, many a shopper will aspire to the highest fashion heights that celebrities have scaled: Zegna suits, TAGHeurer watches, Prada handbags. If your budget and credit cards can keep up with that kind of pace, we wish you all the best. But if you love to shop for clothes and accessories that cost a lot less than a monthly mortgage payment, it helps to know that you've got excellent company in the celebs themselves. And after all, a fabulous bargain for a fantastic look has amazing star quality.

vwoom
ASOS is a pretty good UK site to shop. Bought 2 pairs of retro sneakers that are not available in the US, and are very popular in EU (love that exclusivity). Coupons are common and free shipping with free return shipping as well. Now that is a keeper in my book.
February 5, 2014