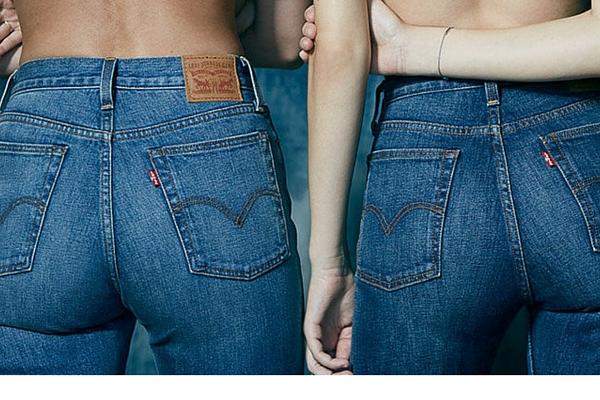 It's understandable that companies are bound to come up with weird names for their products — the weirder the name, the more likely people are to remember it. And "wedgie" jeans are probably one of the strangest and most memorable names we've heard, at least in a while. Surprisingly though, these oddly named pants are getting pretty popular.

Plus, it probably can't hurt that Kylie Jenner has already hit Instagram with photos of her modeling them.

Last time we checked, wedgies were a bad thing. But Levi's has figured out a way to profit from the same idea that used to terrify kids everywhere. Only now, it's cool, because they're supposed to make your booty look amazing like nothing else can.

According to Levi's website, a pair of Wedgie Fit Jeans "hugs your waist and hips, showcasing your best assets." They're made of 100% cotton and the fit and sizing are described as "high rise, slim through hip and thigh," and with a "tapered leg opening."

Senior vice president of Levi's Global Design, Jonathan Cheung, says both the jeans and their name are inspired by how women were already wearing their Levi's: "Just as the 501 CT was inspired by girls wearing the 501 a little bit slouchy, the Wedgie is inspired by girls [who] were downsizing a vintage 505 and wearing it very close and almost vacuum-packed to the rear-ends — hence the affectionate and cheeky name." He also points out that they also employ stretch for some extra comfort.

There's only a few independent and extensive reviews of the jeans, but they tend to be positive. One particular round of testing by InStyle resulted in opinions just as positive as those on Levi's site. However, they do note the jeans are too tight initially, though they apparently become more comfortable over the course of the day. One reviewer said these jeans are not what you'd want to wear to Thanksgiving. This isn't surprising, but for customers who are used to some room in their jeans, it might be a little off-putting.

By the way, if you are inclined to give these jeans a chance, they're currently 30% at Levi's with coupon code "FAMILY30", which also snags you free shipping.

Readers, are you curious to try the Wedgie Fit jeans? Or is this one fashion statement you'd rather steer clear of? Sound off below!

Ovaltine
This isn't a new thing. I've seen as early as the late 1970s some women wearing jeans that looked painted on. Obviously, you need to be wearing a thong underneath if you want to allow the jeans that far up the butt crack.
February 12, 2016