What an Apple + Comcast Partnership Could Mean for Streaming TV

The two companies are rumored to be forming a partnership that might help solve the Internet TV problem.
BY:
ELIZABETH HARPER
DealNews Contributing Writer 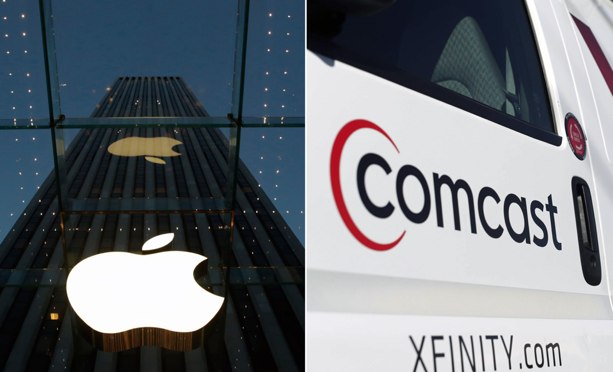 Internet television is a complicated beast. Numerous streaming services, apps, set-top boxes, and interfaces come together to supplement or even replace traditional television service. This means it's definitely an industry that could stand for a touch of Apple's famously intuitive user experience.

But even though Steve Jobs himself said he had a plan for Apple to take on the television market, the company hasn't made much headway. Its current Apple TV product is a fairly run-of-the-mill set-top streaming box that does little to differentiate itself from similar devices like Roku and Google Chromecast.

However, recent reports suggest that Apple is working on a deal with Comcast, the nation's largest cable provider — which is poised to become even larger when it merges with Time Warner. This is the sort of deal that might lead to the tech giant finally tackling the Internet TV problem, but consumers probably have a long time to wait before they see any results. With plenty of room for disagreement, Apple and Comcast are still a long way from finalizing a deal, with both companies wanting control over the user experience and a cut of the cash.

What a final deal might look like is up in the air. Apple's definitely interested in getting prioritized traffic on Comcast's networks, just as Netflix has recently paid Comcast to keep its traffic flowing smoothly to Comcast subscribers. Working out such an arrangement with Comcast could be a sign that Apple is working on its own streaming service or expanding its existing iTunes offerings.

Either way, it's a smart move to secure speedy content delivery with Internet providers first. The deal in progress could also be something much simpler, like a way to guarantee the quick delivery of current iTunes content without running into Comcast's data caps.

Is an Apple Television on the Way?

Hardware-wise, we've been expecting an update on the Apple TV for a while, but we still don't know exactly what Apple has up its sleeves. Rumors of an Apple-branded television set have been making the rounds for years, but it seems more likely that we'll continue to see some kind of set-top box.

Having an Apple-branded set-top device that works with — or replaces — a standard cable box might be in the cards. This is similar to Microsoft's Xbox One, which offers improved television browsing and allows for on-demand streaming with Comcast's Xfinity service. However, with Comcast investing heavily in its own X1 technology, we're unlikely to see Apple becoming Comcast's default set-top box.

Can Apple and Comcast reach an agreement that will change the way Internet TV works? We'll just have to wait and see — but with the deal in such an early stage, we can't recommend holding your breath for it.

gizmovision
looks more like an end to net neutrality. more throttling from the worst internet providers in the world. The only man up will be the one that caves to pay them for their access.
March 26, 2014

LastButNotLeast
Great. So now it will be proprietary AND unreliable.
March 25, 2014