Apple Replaces "Single of the Week" with "Free on iTunes"

Upon canceling its long-running "Single of the Week" promo, Apple quickly created a new "Free on iTunes" section that offers full-length movies and MP3s.
BY:
LOUIS RAMIREZ
DealNews Contributing Writer 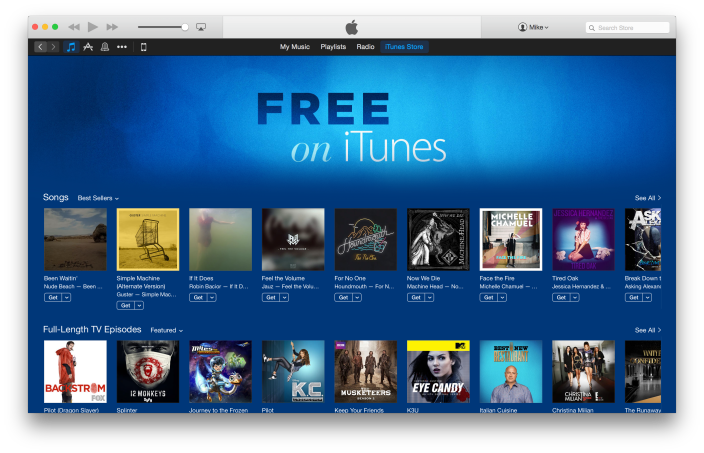 Consumers upset over the cancellation of Apple's free single of the week got some consolation today. The Cupertino-based giant just launched a new section in its digital storefront titled "Free on iTunes." Although the company hasn't officially promoted this as its "Single of the Week" replacement, it's still a move in the right direction for cash-strapped consumers.

Available in the U.S. for the time being, the "Free on iTunes" section currently houses 16 MP3s and 24 full-length TV episodes. Musical titles include "Eyes" by Rogue Wave, "Feel the Volume" by Jauz, and "Tired Oak" by Jessica Hernandez & the Deltas. Full-length TV episodes, many of which are available in HD or SD, include a mix of mainstream and lesser-known titles such as SyFy's "12 Monkeys," Disney's "K.C. Undercover," and HGTV's "Fixer Upper."

Apple used to have a free section on iTunes, but the company opted to let it fade away. This new section appears to indicate that Apple will be actively curating and updating its free offerings, although it remains to be seen if other content, such as books and full-length movies, will be added to the section. Consumers can check out the newly-launched section via this link.

What do you think, readers? Is this better than its previous "Single of the Week" promo? Let us know in the comments below.

CLS9
Justin Kalm, apparently you haven't heard...Apple recently discontinued the music freebie on iTunes. So today they are bringing it back. Guess you are the one who's been drinking....
January 27, 2015

Justin Kalm
I don't know what 9to5mac.com has been drinking, but "free on iTunes" has been there for months.
January 27, 2015

Scott911
glad to see it - for me it wasn't so much about saving the 99 cents, but discovering new artists I would not have ever been exposed to before...
January 26, 2015